Write it down: when a coach apologizes for a touchdown, the game ought never to have happened in the first place. "I want to publicly apologize," Patterson said. "I didn't mean to score the last touchdown. We don't do style points. We didn't throw the ball in the fourth quarter. That's not the program we are, period. I did not want to score 60. I don't think [Tennessee Tech coach Watson Brown] is very happy with me."

Little more need be said for TCU’s 62-7 beatdown of Tennessee Tech on Saturday. 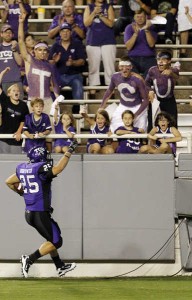 The offending score (the Horned Frogs’s ninth on the night) came on senior walk-on Ryan Hightower’s second career carry, and only touchdown, late in the game. The fullback found himself toting the rock and staring at a wide open approach to the endzone. One can’t blame him for running for it—it’ll be the highlight of his career. Neither can one blame the playcall—apparently Hightower was only supposed to be able to get a few yards on the play. The only blame, really, is that TCU scheduled this game at all.

Why not schedule North Texas, or one of the Louisiana directional schools? They’re hardly better than TTU, and at least are close enough to bring a thousand fans of their own. (The Mean Green might even bring two thousand.)

Oh well; at least the Frogs didn’t embarrass themselves like Minnesota or Virginia Tech. But it was a decidedly low-gear effort. Dalton under or overthrew open receivers—or didn’t throw to them at all. Frog fans finally got to see Casey Pachall, Waymon James, Aundre Dean, Kevin White, and Travaras Battle, although Pachall was not allowed to throw the ball, lest Watson Brown’s feelings be hurt. James and Dean looked every bit as dangerous as billed—against a tired, overmatched TTU defense. Antoine Hicks and Marcus Cannon did not play, but are penciled in to start on Saturday.

Meanwhile, a couple hours to the south, the Baylor Bears walloped Buffalo, and appear to bring a newly living program and fanbase to Fort Worth. They’re 21-point underdogs for that contest, and won’t get that close if the Frogs ramp it back up to high gear.