There is nothing more dangerous in football than a balanced offense. A versatile attack makes the difference between a tired defense and a fresh one; between the capacity to overcome turnovers and being crippled by them; and, ultimately, between wins and losses. Last season the Horned Frogs’s offense rose to prominence behind a newly potent passing attack. This season, perhaps against considerable odds, a couple of other attacks in the Mountain West have developed balance. Not surprisingly, wins have followed. 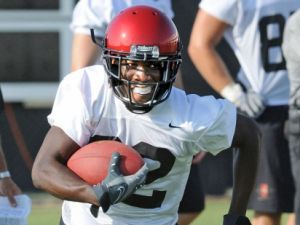 Most eye-poppingly, the San Diego State Aztecs have shown potency on the ground—a feat not seen on the Mesa in many years—in the form of a newly aggressive offensive line punching holes for speedster Ronnie Hillman to run through. Hillman is third in the nation in rushing yards, already topping 500 on the year, and averaging over 6 per carry. Last week, Utah State figured if it could stop Hillman it could stop SDSU, only to discover that loading the line against the rush opened the way for Ryan Lindley to bomb away with his NFL-caliber receiving corps. Lindley completed 70 percent of his passes for 362 yards and three scores. So much for loading the box in San Diego.

Balance, for the Aztecs, is new, and welcome. Brady Hoke’s crew appears to have righted the ship that had so long listed away from its potential. Perhaps the Aztecs will fill the void in the Mountain West that BYU creates when it goes independent in a few months.

To less applause, but to no less effect, has been the development of a balanced attack at Colorado State. The jury may still be out, considering the shorter track record of success in Fort Collins, but keep an eye on two new Rams in the Centennial State. True freshman Pete Thomas, the very highly touted quarterback who early-enrolled to get a jump on the starting job has played better than his win-loss record shows. The rangy freshman has yet to complete fewer than 23 passes in a game, for less than a 63.9 completion percentage. 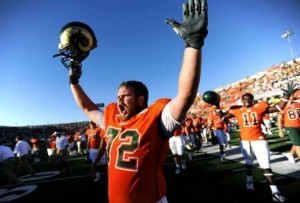 What he hadn’t done, before Saturday, however, was throw more touchdowns than interceptions. Through three games, Thomas had a game-killing 1-6 TD-INT ratio. Against Idaho—which had the advantage of bowl practices last season—Thomas threw three touchdowns and only one interception. As the game slows for Thomas, as it clearly is doing, he will become of the conference’s premier signal callers. His emergence, now evident, significantly lowers the heat under Steve Fairchild’s seat. It may be too soon for Ram fans to start planning a bowl trip, but it looks like the losing streak that engulfed the team last season won’t be repeated in 2010. And, for the first time in Fairchild’s term as coach, he has both the good fortune of having a franchise quarterback enrolled, and is losing the bad fortune of inexperience at quarterback.

And the good news doesn’t stop there for Coach Fairchild. Two of Pete Thomas’s touchdown passes on Saturday were hauled in by Raymond Carter, who also ran for third score. After three uninspiring games, the transfer showed by the Rams are counting on him to be a playmaker. Carter ran for 104 yards against Idaho, and caught four passes for 120 more. Pete Thomas has completed more than 10 passes to give different receivers (nine to Carter); but it will be Carter’s running that balances the Rams’ offense.

Perennially dangerous on the ground, the Air Force Falcons have developed a wicked passing compliment to their option-first attack. Quarterback Tim Jefferson is on pace to throw about 150 passes this season, a 60% increase over 2009 and ’08. Jefferson completes about half of his passes, increasing the Falcons’s offensive potency considerably. AFA out-gained Oklahoma offensively in Norman, and appear poised to contend for the Mountain West championship. Receiver Kevin Fogler’s injury last week may dampen the passing game slightly—Fogler was the Falcons’ top receiver in 2009—but it also may not. He has only two receptions in 2010, only sixth best to date.