Share All sharing options for: Heating the Iron Skillet

From YouPlusDallas.com comes this video about the latest Battle for the Iron Skillet. Enjoy.

Something wonderful is happening for college football in the Metroplex, and I don’t mean TCU’s potential move to the Big East. (More on that only if it actually happens.) What I mean is that the local college football teams are on people’s minds again, in a way it hasn’t been since... jeez, since before air conditioning. (Can you imagine?)

The old rivalry that used to be part of the definition of Dallas and Fort Worth as separate, competing entities is emerging after generations of decay. SMU and TCU are competing again on something much closer to an even playing field—even not just because both are supremely awful. 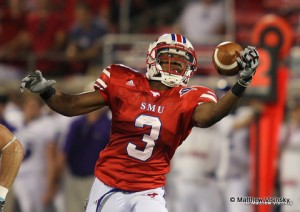 SMU wide receiver Darius Johnson hauls in an incredible catch to extend one of SMU's scoring drives Saturday against TCU.

From here, it appears both schools will go bowling at the end of this season—for the second year running. That rarely happens, and to happen consecutively is rarer than a blue moon. From here, it is not a pipe-dream to hope that both schools will take their respective conference championships to those bowl games, either. That’s a lot of championship rings between Granbury Road and Central Expressway. (Imagine if the Mean Green got in the act? Oh, you can’t imagine it? Me neither...)

Your humble blogger was tickled to see SMU agitate the locals—and successfully!—to "Fill the Ford" for the Frogs-Mustangs tilt last Saturday. TCU probably won’t have to try very hard for a sellout in a year, and not just because Amon Carter Stadium will be half inaccessible due to the renovation that begins in a couple months.

Almost imperceptibly, the battle for the Iron Skillet has become an emotional one. It has gathered unto itself intangibles that make it more than just another nonconference game. That tailgate will be a touch more adversarial, given the larger number of visitors trolling the TCU campus this time next season. Those pre-game warm-ups will be applauded a smidge more emphatically than, say, Colorado State’s or Wyoming’s, or Why’re-We-Playing-You-2A-team’s. That tilt got a second glance when the schedule came out in March, and is going to be circled in 2011. Maybe it already is.

Maybe it already is, because June Jones’s schemes will be totally ingrained into the Mustangs’ roster by 2011, while TCU’s might still feel fresh at game speed for the Frogs’ new starting quarterback. Maybe that game is already lurking in the teams’ subconscious because SMU has played the Frogs noticeably tougher the last two outings, and the Mustangs don’t just hope for a win, but expect it. Maybe that game is already a big deal, because the local media is paying attention to it for the first time since... since both Frogs and Mustangs were well-paid.

Think of the Iron Skillet as a local and tardy phoenix; one that almost perished in a scandal-ridden flames while Ronald Reagan was president, and lay dormant while America ousted Saddam Hussein from Kuwait, and then from Iraq; that slept while the internet awoke and Starbucks became trendy, and then merely ubiquitous; that lurked in irrelevance while skinny jeans went out, and then back into relevance; that slumbered as Michael Jackson became boring, then weird, then dead; that was mostly ignored when LT trod all the heck over the WAC, and while both schools wandered through conference after conference.

And now, after the Horned Frogs have become known for defense, and the Mustangs for their passing attack, the TCU-SMU rivalry is unfurling new wings; it breathes new air. It’ll be a battle royal in 2011, and perhaps afterwards it can reclaim its place on the sport’s short list of storied, mighty rivalries.