Cutting through the crap, Colorado State was b—a—d for the first three weeks of this season. Through three losses to Colorado, Nevada, and Miami of Ohio, the Rams averaged under 43 ground yards, under seven points, over two net turnovers per game, offensively, and gave up, on average, over 412 yards and 35 points per game.

Calling this team merely "oh and three" probably didn't capture the misery. Game-killing weaknesses abounded—in the running game (which netted one yard against Miami of Ohio), in pass protections (averaging four sacks allowed) in the secondary (allowing 80% completions), and at quarterback (Thomas had a 1-6 touchdown-to-interception ratio through three weeks). 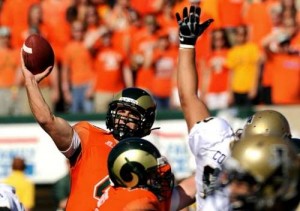 There was one bright spot: true freshman Pete Thomas was completing 67% of his passes, for over 231 yards each game. Coach Fairchild pointed out that Thomas wasn't being asked to do a lot yet, but was getting more of the offense each week.

Due to some injuries and to desperation in the search for some offensive spark, the Rams tweaked their offensive line, giving Weston Richburg and Joe Caprioglio their first starts at center and guard, respectively. The results were dramatically positive. Raymond Carter and John Mosure tallied 130 rushing yards and a score with the new line. Carter added four catches for 120 yards and two touchdowns. Also positive, Pete Thomas completed almost 80% of his passes, to ten different players, despite being sacked five times. More importantly, he threw three touchdowns to only one interception. 36 points and one victory later, the Rams finally showed the kind of balanced attack that they had threatened in the preseason.

Defensively, the Rams remain shockingly porous. Idaho's Enderle hardly could throw an incompletion against CSU; the Vandals ran for 3.4 yards per carry— the Rams' second-worst per-carry allowance this season. (Nevada more than doubled that mark, not surprisingly.) CSU is decent at getting to opposing quarterbacks—perhaps this is fair, because the Rams are second to last in protecting their own signal caller. Some indicators point up for this crew, however. Defensive end Broderick Sargent, thrown into the fire as the Rams lost multiple linemen right before the season, has exceeded expectations. C.J. James, perhaps CSU's most talented defensive end, is expected back from a spring injury (torn meniscus) this week. Ricky Brewer, Alex Williams, and Mychal Sisson are playing to their potential as one of the best linebacking corps in the conference. True freshman Shaq Bell has played very well in CB Momo Thomas's place (the two are half brothers).

How will the Rams match up against the Frogs? Probably not very well. The offensive line is not likely to improve its position as second-worst in pass protection; likely the ground game will retreat to early-season form in the face of TCU's trademark onslaught rush defense. Shorn of a ground game, the Rams likely will be forced to throw early and often, just like in weeks one through three of 2010.

Here's where they may have some success. Thomas is accurate under pressure—and TCU has shown some vulnerability in its pass defense. However, unless Thomas can connect for a couple scores early, and jump ahead of the Frogs, it will be a bad day in Fort Collins for the green and gold. This is true mostly because the CSU is going to spend an awful lot of time defending the Frogs' offense. TCU has proven a very capable clock-eater, driving with a wicked mix of running laterally and between the tackles, and passes to the side and over the middle. Given Andy Dalton's stellar performances against average secondaries, the Frogs likely will have a field day, offensively. It's a defensive coordinator's nightmare, and given the youth movement in Fort Collins on defense this year (six true and redshirt freshmen are on the Rams' two-deep) expect another lopsided win for the Frogs.

Much of the fourth quarter will feature Casey Pachall leading the twos and threes in run-only drives, with lots of punting and fans heading for the exits. TCU 47, CSU 10.