So this is what it's like to be so good that you're good even when you're not good. Got it? Good.

TCU took its act on the road for the first time, really, this season. And it learned again how it is (always) true that a team must travel with more intensity than it plays with at home. After thirty minutes in Fort Collins, against a bad (but improving) team, the Frogs had only two field goals to show for their effort, and their top-five ranking. The defense was clicking on all cylinders. CSU head coach Steve Fairchild told Gary Patterson after the game that his crew wouldn't have scored had the game continued until midnight. But the offense wasn't matching the defense's intensity or execution. Patterson gathered the troops on the sideline before they jogged to the locker room, and read the riot act. 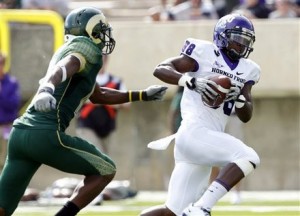 Jimmy Young hauled in his first touchdown pass of the season. (Photo: AP)

It worked. TCU opened the second half with a new, kick-you-in-the-mouth attitude on the ground. Five plays later-- four of them rushes for six, 47, 16, and eight yards, Ed Wesley was dancing in the Rams' endzone. The Frogs added 14 more points before the fourth quarter was four minutes old.

Tanner Brock and Tank Carder played like their hair was on fire, combining for 17 tackles, a sack, a hurry, a forced fumble, and 1.5 tackles for loss. Colin Jones was superb at safety, three times cutting down a ballcarrier behind the line.

Impressively, despite four sacks and maddening coverage, the Rams' young quarterback was unflappable, and arguably had a better day passing than TCU's senior. Thomas completed over 58% of his passes (Dalton : 46%). Dalton had the luxury of a ground- and clock-eating run game, and a shut-down defense. And after 60 minutes, that was the difference.