The Cowboys are one of the four Mountain West teams to have beaten TCU-- it happened in Laramie in 2007. But Wyoming has never even been competitive with the Frogs in Fort Worth. Saturday will be no exception. 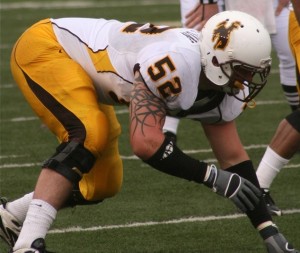 Former linebacker Gabe Knapton has become a decent defensive end for the Cowboys.

Up front, the WYO offensive line hasn’t made waves. Junior LT Clayton Kirven, senior LG Sam Sterner, sophomore C Nick Carlson, senior RG Jack Tennant, sophomore RT Josh Leonard. UW co-offensive line coach Pete Kaligis said "I don’t look at them as being young. Carlson played last year, started some games, and has plenty of experience under his belt. And we used Leonard a little bit last year in a tight end package, so he also has game-experience. Talk about being young or not, when that first snap comes, you have to grow up." Nick Carlson thought the group looked good going into the season, "This coaching staff has invested a lot of time in us both physically and mentally to be able to play this game," Carlson said. "Things are flowing a lot more smoothly his fall."

Things stopped flowing smoothly when real games began. The line is on pace to allow about as many sack as last season (30), and is paving the way for a significantly reduced rushing game. Quarterback Austin Carter-Samuels has been sacked 12 times—second most in the conference—and the Cowboy rush strikes fear into no hearts. Wyoming’s ground game is 118th out of 120 nationally. Alvester Alexander is eighth best in the conference, averaging 3.1 ypc. That’s the worst per-carry number among conference leaders, better only than ACS (21st leading rusher). The whole team averaged 3.6 ypc last season. Nehemie Kankolongo has not made a difference, despite his extensive pre-season press clippings.

Granted, were the Cowboys’ passing attack up to snuff, its paltry rush attack would not be up for discussion. But the ‘Pokes’ passing game registers only 89th nationally, down from 72nd last season (through five games). That may be a reason to cheer, however, as Wyoming’s passing game was fully 104th best nationally on the full season, and Wyoming’s first five games in 2010 have been against tougher competition than in 2009. Although Carta-Samuel’s completion rate is about eight percentage points higher, he did not make the trip to Fort Worth. Backup Dax Crum will get his first significant minutes since 2008. Crum's played the last two series against Texas a couple weeks ago, converting one third down with a 12 yard pass to Travis Burkhalter. Expect even less effective quarterback play on Saturday then is usual from the Cowboys.

Receivers DeJay Lester, Robert Herron, and Jonathan Aiken, who outshone most of the returning receivers in fall camp, are buried 10th, 11th, and 12th on the stat sheet. Zach Bolger, David Leonard, Chris McNeill, and Mazi Ogbonna are the leading receivers on this year’s squad. Alvester Alexander provides a running escape valve for Carta-Samuels-- the runningback has caught nine passes so far this season. Mazi Ogbonna "I spent a lot of time getting my conditioning up, getting bigger and stronger and trying to help the team out any way I can. Coming here out of junior college, the speed of the game and strength of the players out here [were a big change]. "He's had a nice camp," UW coach Dave Christensen said. "He's doing well and is much-improved." Looks like Wyoming requires a second talent upgrade at wide receiver, or an upgrade on the o-line, in order to work Christensen’s spread. Perhaps it needs both.

Wyoming’s tackle leaders all play behind the line—safeties Shamiel Gary, Chris Prosinski, LB Ghaali Muhammad and Brian Hendricks, and CB Marcel Gibson are 1-3 and 5-6. Converted DE Gabe Knapton has transitioned very well to playing with a hand down, tallying 33 stops (fifth best on the team) three for losses. That high-tackle secondary is pretty good, 48th best in the nation through five games. Safety Shamiel Gary had five double-digit tackle performances in his first year at the college level. Gary is still the youngster of the secondary, but he's surrounded by three-year starters in cornerbacks Marcell and Tashaun Gibson and free safety Chris Prosinski. Gary’s mission: "I'm looking to improve...this year." The run defense, however, is awful, 114th in the nation. This marks a considerable digression from last season, when the Cowboys were the 68th best run stoppers nationally.

Perhaps the only bright spot in the prognosis for this week's game agains the Horned Frogs, for Wyoming fans, is the hope that Wyoming's secondary, which is better than Colorado State's, can be as successful against TCU's passing game as the Rams.' CSU was able to hold Andy Dalton under 50 percent completions. This frustrated the Frogs until they switched, at halftime, to a run-first gameplan. Look for Wyoming to attempt the same success against TCU's short passing game.

But, like in Fort Collins last week, any success the Cowboys have against the Frog air attack will be offset, and then some, by TCU's defensive showing, and its running game. Expect the Frogs to hold the ball significantly longer than Wyoming, and to gash the Cowboys for ground yards relentlessly. Deepening the misery of Wyoming fans, don't forget that Wyoming is the second of TCU's common opponents with Boise State. Patterson-- despite his insistence to the contrary-- has to show that his squad is as capable as Boise's. Boise won by 45. TCU will come close-- but not match-- that margin. TCU 48, Wyoming 6.