Share All sharing options for: Mountain West at midseason

Through six weeks, who is a better freshman quarterback in the MWC than Jake Heaps? A better freshman runningback than Waymon James? Why are Utah's eye-popping defensive stats suspect? What team's back seven includes four of the top five tackle leaders in the conference? Answers to these, and more analysis, in the Purple Wimple's midseason conference review. 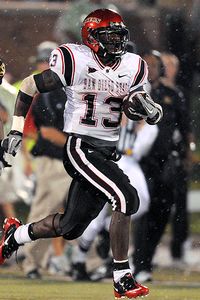 To date, four Mountain West teams run the ball very well, averaging over five yards per carry: AFA, TCU (a beastly 5.9 ypc each), San Diego State only a few inches behind, at 5.8 ypc, and Utah at 5.5. Utah uses high-grade productivity in the air (70.5% completions, 13 TDs) to amass 50.2 points per game (3rd nationally). That SDSU is on this list is the best indication to date that Brady Hoke has turned the Aztec ship around.

BYU showed a much stronger running game against San Diego State this weekend, and now averages a respectable 4.1 ypc. Air Force and TCU score touchdowns on the ground a lot: 22 and 23, respectively. That Wyoming has had little success on the ground is not surprising: the Cowboys have played premier defenses repeatedly. New Mexico is just as bad on the ground as it was in 2009.

Seven of these eight top performers in the MWC made waves last season (TCU's James redshirted in '09). The newcomer to be reckoned with in the MWC is Ronnie Hillman in San Diego (2nd, 594, 6.3). In fact, it is Hillman's production, behind a most-improved o-line, that has made San Diego State the best surprise of the first half of the season in the Mountain West. If Hillman's production doesn't precipitously decline as the Aztecs continue conference play, look for him on the short list for Freshman of the Year honors. 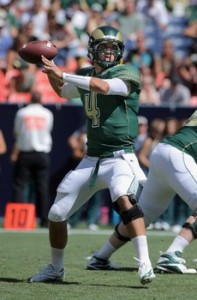 At quarterback, Utah's Wynn (163) and TCU's Dalton (154) lead the league in QB rating, and do so comfortably; third is SDSU's Lindley, at just over 138. The new starter having the best year is in fact not BYU's Jake Heaps, hype notwithstanding, but Colorado State's Pete Thomas.

Thomas's QB rating is almost 30 points higher than Heaps's; Thomas is second in the MWC in completion percentage (67.5%) and yards (1,333), while Heaps is second-to-last in percentage (53%) and fourth in yards (885). Thomas has done this while being sacked twice as often as Heaps, and benefitting from a rush attack that generates half as many touchdowns, and about 50 less yards per game.

Defensively, TCU and Utah are the class of the league. The two lead the league in sacks, scoring defense, rushing defense, total defense, and are both in the top three in pass defense (AFA is number two), and tackles for loss (SDSU is first). TCU has faced significantly stronger offenses to date, perhaps indicating the stronger defense is in Fort Worth. Utah's opponents' to date national ranks in rush offense, pass offense, total offense, and scoring offense are, averaged, 88th, 91st, 102nd, and 96th. TCU's 1A opponents' average ranks in the same offensive categories are 88th, 50th, 71st, and 76th. That debate loses its academic character on November 6. 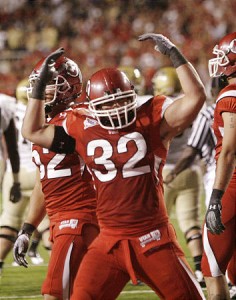 Mountain West defensive player standouts are TCU defensive end Wayne Daniels and safety Colin Jones, almost all Wyoming's back seven, Utah's new linebacker Chaz Walker, new AFA linebacker Jordan Waiwaiole and very experienced cornerback Reggie Rembert, SDSU linebacker Miles Burris, and BYU safety Andrew Rich. TCU's Daniels and Jones have 19 tackles for loss between them (including assists). Wyoming's Gary, Muhammed, Prosinski, and Hendricks take four of the top five tackle totals to date. Utah's Walker is leading his team in tackles, and is second in tackles for loss. Air Force's Waiwaiole stuffed Navy's option and leads the team in sacks. SDSU's Burris is second on his team in tackles, and leads the team in tackles for loss and sacks. BYU's Rich is the only non-Cowboy in the MWC's top five for tackles.