It's ironic: the program that deconstructs two 1A conferences in order to midwife its own independence is having a terrible time re-constructing its own offense. That such an offensive move could coincide with such a punchless offense is proof God has both a sense of humor, and perhaps less regard for BYU's tradition than its adherents hope. 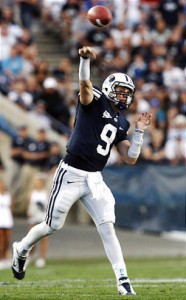 BYU's success will rise with the growth of true freshman Jake Heaps in the Cougars' spread offense.

Rebuilding is rarely this painful: in almost every category measured by the NCAA, BYU is horribly worse in 2010 than it was in 2009. Some of this decline isn’t a complete surprise. Everybody expected dropoff from the passing game. But did anybody expect BYU to go from 13th to 86th in passing offense,* and 6th to 117th in pass efficiency? That’s not dropoff, that’s dropout.

Jake Heaps, less than a year removed from high school, has yet to "click" in the Cougars' pass-happy offense. He has completed barely over half of his passes (53%), has thrown only one touchdown. He's not an interception machine, only having thrown four so far. But he's just going to have to complete a lot more passes before the Cougars return to anything like the form to which they're accustomed.

Perhaps the receivers and tight ends bear some blame. The team’s top pass catcher to date is runningback J.J. DiLuigi—who is also the team’s leading rusher. His 26 grabs put him on pace for 52 on the season, for a respectable 570 yards. The team’s leading receivers among actual receivers are McKay Jacobson and Cody Hoffman, who are on pace to haul in 40 passes apiece, each for under 400 yards. This is significantly less production from receivers (including tight ends) than usual.

Does the run game, behind an o-line that starts no freshmen this year, and averages 314 pounds each, offer any relief? It was supposed to—despite Harvey Unga’s paternal departure from the team—with experienced Bryan Kariya and hotshot J.J. DiLuigi returning, and adding early enrolled Josh Quezada to the backfield. To date, it hasn’t. Even after beating San Diego State with a 4.4 ypc effort, the Cougars have fallen from 50th to 71st in rush offense, and 47th to 82nd in sacks allowed.

The bottom line offensively is this: BYU has fallen from 13th to 91st in total defense, and even more horribly, from 8th to 113th in scoring offense. BYU is, through six games, has one playmaker (DiLuigi) and until quarterback Jake Heaps starts completing more passes, pain will linger in Provo.

The defense has not found a higher gear to make up for the team’s offensive malaise. Comparing this year with last, through six games, the rush defense fell from 36th to 113th; pass defense 33rd to 73rd; pass efficiency defense 66th to 79th; scoring defense 43rd to 78th; sacks 63rd to 106th; tackles for loss 97th to 117th; total defense 50th to 90th. Even punting has suffered, falling 10th to 87th. Kickoff returns? 28th to 46th.

By now it is surprising that BYU’s turnover margin hasn’t fallen; it’s 89th this season, and at this point last year, it was 89th. 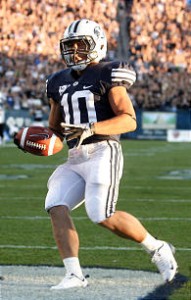 The only bright spot to be found is that of trajectory. BYU found its oats running the ball last weekend against San Diego State, and that emphatically. The Cougars converted nine third downs rushing the ball, and scored on the ground on a tenth. BYU held the ball for just over forty five minutes. Kariya, DiLuigi, and Quezada combined for 55 carries and 269 yards. That’s the kind of game Cougar watchers expected early this season, but had to wait until week six to see.

Behind that kind of ground game, a quarterback can grow. But BYU can fairly well bet that it won’t get that kind of ground game against TCU. While it’s true that the Horned Frogs’s rush defense isn’t quite as stout as it was in 2009, it is still 15th best in the nation. And the pass defense is better—from 19th in ’09 to 2nd in ‘10. The defense is on a roll, too, having tallied its first back-to-back shutouts under Patterson. Three in a row, while unlikely, is not unattainable.

A slide back into the Cougars’ early-season offensive impotence appears to be on tap. The best news for the Cougars involving TCU is that Gary Patterson has repeatedly disavowed style points, and has developed considerable reputation refusing to run up the score. For that reason alone, the Wimple predicts TCU will score less than 50 points on Saturday. TCU 49, BYU 6.

* all stats included in this post are through six games, including those from 2009.