Clearly Bronco Mendenhall has learned the lesson of the F-Bowl: TCU lived and died in 2009 by its running game. "TCU was running it about 270 yards a game [in 2010] and we did not want to allow them to be multi-dimensional...I think we played the run effectively. We could not allow them to be two dimensional." 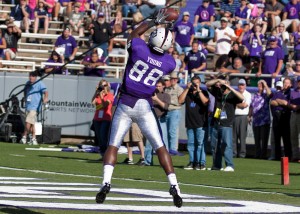 BYU held the Frogs to a season-low 108 yards rushing, but only were able to gain 56 themselves, 30 of those on the Cougars's scoring drive in the third quarter. With both running games held in check, the difference in the game came on quarterback play. TCU held Jake Heaps under 50% completions for the second time in his young career (when playing much of the game), the longest completion being for 13 yards, and five for first downs. The Frogs intercepted Heaps twice.

Contrast Heaps's freshman performance with Andy Dalton's senior performance: Dalton completed two thirds of his passes, only four completions being not for a first down or a touchdown. The game was probably Dalton's third-best this season. The senior slinger connected with seven different receivers, six of them multiple times. Freshman Josh Boyce was the go-to receiver this week, hauling in eight passes for 127 yards and two scores.

The Frogs's offensive line had its worst game since the F-Bowl. BYU tackled Frog rushers behind the line seven times, and by stacking the box, kept the Wesley-Tucker-James-Dalton ground-eating machine mostly in check.