Share All sharing options for: Welcome back, Rams’ and Aztecs’ ground games

Two Mountain West teams that competed for the bottom spot in the conference in 2009 (including the winner) showed success in their respective rebuilding efforts this weekend. 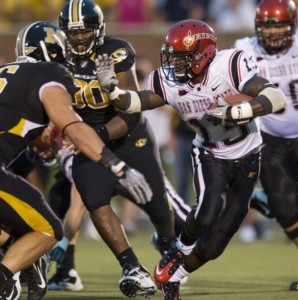 The formerly-luckless San Diego State Aztecs finally got a positive call on a crucial video replay, and sent Air Force home unhappy. More importantly, SDSU re-established its torried pace on the ground, recapturing the 200 yard mark for the fourth time this season. 191 of those yards came via the fleet feet of freshman Ronnie Hillman, the third 100-yard game of his young career. Hillman again leads the conference with 785 yards to date (good for 8th nationally).

The Colorado State Rams have begun to show the much ballyhooed depth in the backfield, garnering over five yards per carry in consecutive weeks, topping the 200 yard mark in both contests. CSU got over 200 yards (201 yards, to be exact) one time in 2009. Perhaps surprisingly, UCLA transfer Raymond Carter did not play in the Rams's last two games. Leonard Mason and Chris Nwoke combined for 191 and 196 yards in the last two games.

Both SDSU and CSU have high grade passing games to complement their rush efforts. Ryan Lindley (SDSU) and Pete Thomas (CSU) have the third and fourth best passer ratings in the conference. Thomas has finally evened out his touchdown-to-interception ratio at 8:8, and has the league's highest completion percentage (67.7%), despite being sacked 24 times (but only three times in the last two games). Lindley has the luxury of the conference's best two receivers plaguing his opponents' secondaries. DeMarco Sampson and Vincent Brown have combined for 56 receptions, 1019 yards, and five touchdowns. Brandon Sullivan's smart fullback play and the Aztecs' much improved offensive line have given Lindley time to find his receivers; Lindley has only been sacked three times.