2010 was supposed to be the year Air Force broke into the Mountain West’s top three—likely taking BYU’s place. BYU has played its part well, losing to Air Force and TCU, but beating San Diego State. Air Force started out on cue, nearly missing a win over Oklahoma in Norman, finally beating Navy, BYU, and then whipping Wyoming, and Colorado State.

The Falcons again led the nation in rushing, with their signature triple option. But a warning sign that the defense wasn’t as stout came with the win over CSU, even though the score wasn’t close. The Rams outrushed the Falcons by almost 40 yards.

The Falcons flew to San Diego State next, attempted 30 passes, and lost by two points. AFA did outgain SDSU on the ground, but the Falcons could not stop Ronnie Hillman, who netted 191 yards on the ground. Neither could the Falcons force Aztec quarterback Ryan Lindley to perform under his averages. Lindley went 14 of 27 for 247 yards, with one interception and one touchdown. 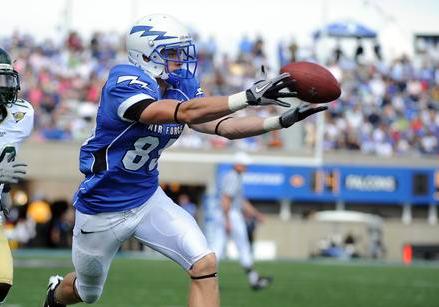 Zach Kauth is the second deep threat the Falcons have lost to injury this seasont. (Photo: Andy Cross, Denver Post)

This road loss in San Diego significantly upsets the Mountain West’s apple cart. For several years running, the Mountain West has been a three layer cake: the Big Three have been the Big Three, and Air Force has been the clear Number Four, and then the rest of the conference fell into place, one way or another. SDSU’s victory over AFA muddies the picture.

Individually, the Falcons are performing about as expected. Three Falcons rank among the top six MWC rushing leaders, and the team is the nation’s best rushing attack. Asher Clark, Jared Tew, and Tim Jefferson have been the nation’s most troublesome rushing trio, although Tew’s season ended in San Diego with a broken leg. Reggie Rembert has led a very good Falcon secondary, after a frightful-looking injury early in the season, when he was taken off the field on a stretcher. Rembert has played in every game this season.

Tim Jefferson completes about half of his passes, although he’s lost his two big targets, Kevin Fogler and Fogler’s backup, Zach Kauth, to injury. Tew’s backup, Nathan Walker, puts a smile on Coach Calhoun’s face. But that smile is only a break in Calhoun’s frown as he says, in flattering sincerity, that there is no way there are three better teams than TCU in college football this season.

The heavily re-vamped AFA linebacking corps is not stuffing the run like its predecessor. Jordan Waiwaiole, Patrick Hennessey, and Brady Amack are no slouches, for sure. All three are in the top four on the team in sacks, tackles, and top five for tackles for loss. But Air Force has only the 91st best rushing defense nationally, compared to 53rd best at this time last season. Some of that decline is due to a lighter and younger defensive line. Ben Garland, the Falcons’ best defensive tackle in years, graduated. While his replacement, Ryan Gardner, has been out with injuries, the Falcons have given up substantially more ground yards than usual.

This weakness against the run plays into the sweet spot of TCU’s offense. Prior to last week’s BYU game, the Horned Frogs’ success with the ball had come more on the ground than in the air. The Frogs are the only team in the Mountain West to hold the ball longer than Air Force, on average. TCU’s 34:58 average is best in the country. Look for the Frogs to flex the ground game to the roar of a sold out crowd—the second of the year. TCU 48, Air Force 10.