The Air Force Falcons continued their now-venerable tradition of collapsing against TCU when playing in Fort Worth. The Frogs doubled up the Falcons in almost every statistical category. 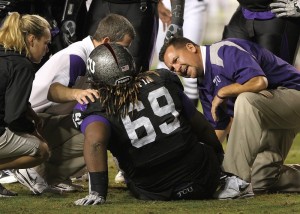 For the first time in the Wimple's game-watching memory, TCU never punted in a game.

The Frogs dominated the Falcons in the trenches, and did so without three of their starting o-linemen, and after the first defensive series, without defensive tackle Kelly Griffin, whose ankle was broken in an unpenalized chop block by Jordan Eason. Griffin will miss the remainder of the regular season, at least. Patterson highlighted the performance of the backup linemen, "We were down three starting offensive lineman who didn’t play this ballgame. For us to go run the ball like we did speaks volumes for what we can do in the future. The rest of those guys are younger players."

Indeed, that so many young Horned Frogs played so well against one of the toughest unranked teams in the country speaks well of TCU's future on both sides of the ball. An incomplete list of TCU players who lined up against Air Force for the first time include cornerbacks Elisha Olabode and Travaras Battle, safeties Johnny Fobbs, Chris Scott, Jurrell Thompson, linebacker Kenny Cain, defensive end Stansley Maponga, and offensive tackle Jeff Olson. Experience, especially on defense, is doubly valuable when facing the Falcons, and TCU was able to amass plenty of it on Saturday.

TCU is the third consecutive team to run well on AFA. "It was part of the game plan," said Dalton. "We saw on film that we could run the ball on them." And TCU did. The star of the game was left guard Spencer Thompson, who started in Blaize Foltz's place (and Foltz Kyle Dooley). Thompson played like a veteran, and made gaps multiple times for speester Ed Wesley, who amassed 209 yards and two touchdowns on 28 attempts. Dalton described it this way: "We were blocking well, making holes and all the running backs were able to get in there." Dalton had his career-longest run in the third quarter, for 47 yards. "I have never seen that much open grass in my life," said the senior. Matthew Tucker had one of his best games of the year, with 12 carries for 63 yards, six first downs, and one score.

Defensively, TCU rode the emotion of the sold-out stadium and bent but didn't break (after AFA's first drive, which ended in a touchdown). Every Falcon drive after that score ended in a punt or a turnover on downs. TCU held AFA to under half of its average offensive output in total yards, half of its average in rush yards, and one-fifth in points. Tanner Brock, Colin Jones, Tejay Johnson, and Stansly Maponga were brilliant, totaling 24 tackles between them, 1.5 for losses. Jeremy Coleman filled in for the chop-blocked Kelly Griffin, and without any obvious letdown in performance.

Andy Dalton had a sub-par day in the air, throwing an interception, a touchdown, and completing only 55 percent of his passes. On the ground, however, he was outstanding, even without the 47 yard scramble in the second half. Dalton had 93 yards rushing for three first downs and one touchdown on seven attempts.