For five and a half minutes, Frog fans (46,694 of 'em) wondered if the occasional ghastly prediction of a post-Utah letdown wasn't so far-fetched after all. At the 9:16 mark, TCU had managed -13 yards of offense, and were already 14 points behind the surging Aztecs. But the tide already had turned, however imperceptibly. 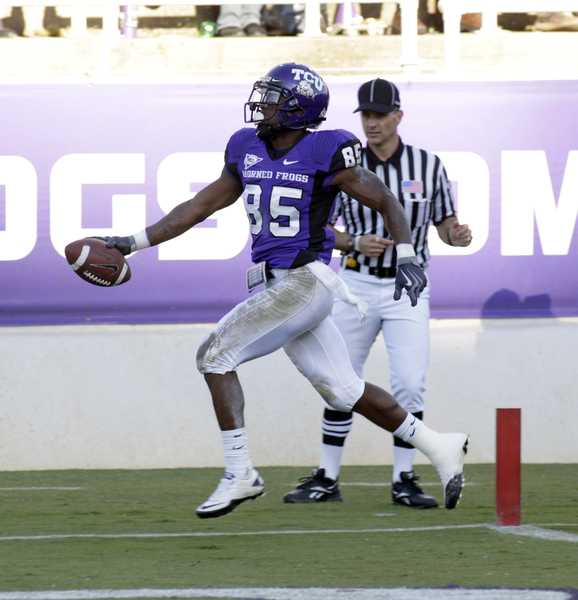 Jeremy Kerley scored three touchdowns in the first half.

Between SDSU's first drive and TCU's fumble in the endzone for a second SDSU touchdown, the Frogs had held the Aztecs to three-and-out. The Frogs held SDSU to three-and-out in the next six SDSU drives as well. The Aztecs did not get their second first down until two minutes remained in the fourth quarter; by then, the Frogs had scored 37 points. SDSU capitalized when TCU let off the gas a little, throwing two 30+ yard touchdowns to Vincent Brown in the fourth quarter. But it was too little, too late.

Again, Andy Dalton had a big day in the air, while waiting for the running game to get going. In the first half, the senior went 19 for 28 and all four of his touchdowns on the day. Three were to Jeremy Kerley. The running game was powered entirely by Matthew Tucker and Waymon James. Ed Wesley ran one play on the day, for no gain.

More troubling than the Frogs' slow start, and long touchdowns given up late, were TCU's two drives into the redzone in the second half for no points. Thankfully hapless New Mexico is the only opponent remaining on the schedule, and that after a bye. The Frogs missed Ed Wesley on offense, and showed susceptibility to the long pass.

The sellout boosted the Frogs' average home attendance this season a record 42, 466-- an 11 percent increase over the previous record, set last season. The renovated stadium (implosion set for December 5) will hold only 40,000, so expect the latest record to last awhile.