When a team gets out-gained, out-first-downed, runs 25% fewer plays than its opponent, but wins anyway, one assumes a gaggle of turnovers.

Neither team committed one Saturday in the Rose Bowl. Instead, each team did what it did, and in the end, TCU was better. Wisconsin blew open massive holes for its runningbacks, but couldn't protect its quarterback, who had a distinctly forgettable day. TCU protected its quarterback, who had one of his career best days. And after all the brouhaha about Wisconsin's amazing run game, and especially its overstuffed offensive line, it was quarterback and secondary play that made the difference. 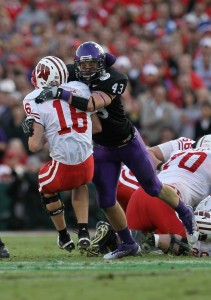 The quarterback who won the Johnny Unitas Golden Arm award couldn't make his opponent's secondary pay, despite their poor traction on the wet grass. The quarterback who should have won the award was flawless. And so was Tank Carder, who brought the heat all day from his linebacking position, and carved a nice pre-season niche for himself on every national award list a linebacker can.

The game was unlike any of TCU's recent wins, going back a few years. The Frogs didn't win by a punishing ground game, or run-stuffing defense. Andy Dalton carried this team with his smart reads and pin-point passing. Dalton didn't underthrow the long ball; his receivers didn't have the dropsies. This was like the F-Bowl repeated, only with the passing game functioning at a high level, meaning this was what the team had hoped to do in Glendale last January.

In fact, this win represents the opposite end of the continuum that began with last season's resounding thud against Boise State. So many juniors left that game disgusted, but resolved to make another chance to win on so grand a stage. They, none of them more than Dalton, did exactly that in Pasadena.

Their win puts their class at the top of the heap, shoulder-to-shoulder with the mighty '38 Frogs that claimed a national championship. And while it's true there's probably nowhere to go but down, it's equally true that the view from these heights is exhilarating.