Wrap up: in 2010 the Frogs got the monkey off their back

Share All sharing options for: Wrap up: in 2010 the Frogs got the monkey off their back

Way back on September 2nd (only in football does three months a few days seem way back) the Wimple offered, as a public service, five reasons to curb our collective enthusiasm for the newborn football season. Relax, was the message: 2009 rocked, and there're a lot of good reasons to expect 2010, while good, not to exceed '09. Injuries might raise their ugly heads,

and this year's weakest link is backup quarterback.

"So pray for Andy Dalton’s durability, if you want the Frogs to top 2009 this year. An inexperienced Pachall... isn’t going to best the Utes in Salt Lake City, or manhandle SDSU’s much-improved six-man secondary... in his first year. So let’s hope he doesn’t have to." 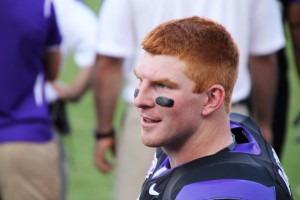 TCU's ginger-headed gunslinger was one of the Frogs' constants in 2010.

And, perhaps remarkably, the redshirt freshmen never had to take a snap with the outcome of the game in doubt. Neither did the Frogs cave under the pressure to be perfect (another potential landmine noted in September), nor were the Frogs' efforts in vain because Boise was more perfect than TCU. In fact, speaking of Boise, perhaps it was a gift that this sentiment was true in September:

"Remember, Boise State put that monkey named You’re Still Not All That right back onto the Horned Frogs’ back in Glendale, and if history, including 2009, proves anything about TCU, it’s that the Frogs never—ever—get the monkey off their collective back."

And since 1938, that had been true, with exactly zero exceptions. Andy Dalton and other Frogs said, over and over, how focused they were on returning to the BCS in 2010 and playing well; on purging the taste of the F-Bowl from their mouths. It was Boise that, by besting the Frogs in Glendale, gave TCU the necessary motivation for success in Pasadena.

That success was a culmination of factors that were visible in September. Two days following the article quoted above, your humble Wimple offered these five reasons to expect 2010 to exceed the heights of '09. (1) Andy Dalton and his receivers were all back; (2) Jake Kirkpatrick and his brethren in the trenches would dictate, not react; (3) the "ohmygawd backfield;" (4) a favorable schedule in which all the good teams came to Fort Worth (or Arlington), except Utah, and for that game Dalton's greater experience than Utah's Wynn's would be the difference; and (5) with such a high starting ranking, TCU wouldn't be passed by one-loss cartel teams. 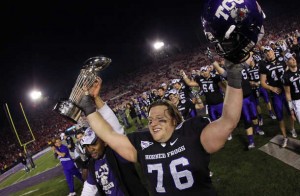 The story of TCU's tremendous 2010 season is no less than the coming-true of every one of those good predictions, and (somehow!) the coming-false of every one of the bad predictions. It is hard to fathom a more perfect season. Dalton and his receivers indeed had a stellar year; Jake Kirkpatrick won the Rimington, and led a line that generally paved over opponents; the d-line was nearly as dominant; the backfield was outstanding; only one team registered a threat at Amon Carter Stadium, and the Utes' poor quarterback was so thunderingly confused by TCU's defense while Dalton had one of the best games of his career; and to top it off, the one-loss cartel teams in fact did not outrank TCU.

It all started in Arlington, where the Frogs steamrolled the Oregon State Beavers, despite costly interceptions. A good run game covers a multitude of sins. After a gimme against a 2A team, the Frogs beat the ever-living snot out of Baylor (a fluke, Robert Griffin later said). Andy Dalton had just the third over-200 passer rated game in his career. He'd tally three more before the Rose Bowl. The Frogs were slow starting in the following week's tilt with the rebuilt Mustangs, but eventually stifled SMU, again. TCU overcame a slow start in Fort Collins to start October, as well; the passing game was frightfully bad, but the rush attack redeemed it, and the Frogs continued their conference winning streak into its third season.

The second half of the season began with a hamstrung Wyoming, which may have been the weakest opponent to enter Amon Carter Stadium since San Diego State in 2006. One shutout later, it was BYU's turn in Fort Worth. The Cougars left the lockerroom arm-in-arm, and returned to it throughly disarmed. It's run defense was stout, but the Heaps-to-anybody connection hadn't begun to click; the freshman may never get to test his mettle against the Frogs' defense again. Last up in a long homestand, Air Force opened with one good drive, and then returned to its usual role (while in Fort Worth) of whipping boy. But not before breaking Kelly Griffin's ankle on a chop block. A late night in Las Vegas was forgettable, win notwithstanding, and then came the breakout. 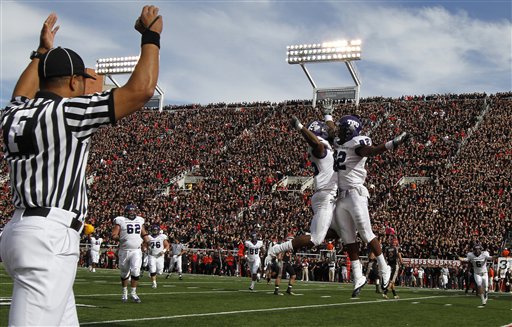 The Frogs whipped Utah in Salt Lake City in the most-hyped regular season game of the year.

TCU had been favored-- usually by a lot-- in every contest so far, and had performed about as expected each week. TCU's return to Rice-Eccles Stadium loomed for months, (years, really) and the hype was red-hot by kickoff. This really was the first nationally relevant game of the year for for both teams, and the result was almost as stunning as it was emphatic. Andy Dalton rated over 200 for the third time this season, and Jordan Wynn couldn't have had a worse day. He was hesitant, harried, and by the fourth quarter, booed by his own fans. This was one of those games where TCU could do no wrong, and the Utes could do no right. Even a botched pitch late in the fourth went the Frogs' way-- Pachall and James missed their connection, but James scooped it up and after a neat move found himself unchallenged to the endzone.

A week later came a close call with San Diego State-- the only close call of the regular season, really since the trip to Air Force in 2009 (not counting the F-Bowl, of course). That five-point win weakened the Frogs' reputation among the pundits, and neither whipping lowly New Mexico nor joining the Big East could restore it.

But a football season is a funny thing. With almost nobody was watching (it was after midnight on the east coast) Boise State more than repented for the F-Bowl by losing against Nevada that week, and suddenly 2010 was looking very rosy indeed in Fort Worth. 11-1 Wisconsin drew the Big 10's autobid to the Rose Bowl, to face the Frogs. 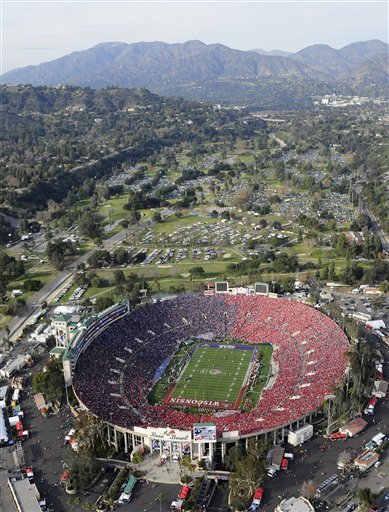 Of course, they saw it the other way around. A cartel-outsider like TCU never belongs in the Rose Bowl, no exceptions, even in years with an exceptional cartel rule. True, the Frogs' conference schedule isn't a killer, but perhaps the powers that be had overestimated Wisconsin's. The matchup was a good one. Nobody runs like Wisconsin, and nobody stops the run like TCU. The deciding factor looked (to the Wimple, anyway) likely to lie in the strength of TCU's passing game.

Sure, Whisky was a good as advertized, but nobody advertized them as a pass-to-kill-you team, and that is what it needed to be to to beat TCU. Tank Carder proved a one-man wrecking crew in southern California, hurrying, hitting, sacking, and batting down Scott Tolzein, while Dalton was unflappable and almost untouched behind his line. When the confetti flew, it was TCU that wore smiles, Gatorade, and tears of joy.

And perfection. They finished perfect, cementing their legacy as the best team of Frogs since the leather helmet era, if not ever. This team, heavily senior-led, was unflappable to the end, and took 44 wins with them on their way-- more than any before them. Their names are indelibly etched in Frog lore: Andy Dalton, Jake Kirkpatrick, Jeremy Kerley, Marcus Cannon, Wayne Daniels, Cory Grant, Kelly Griffin, Tejay Johnson, Jimmy Young, Bart Johnson, Josh Vernon, Jason Teague, to name a dozen and slight half a dozen more.

They are splendid ball players, and shook, in their turns and to their cores, the Mountain West, the BCS, and even the Big 10. These men never let the Iron Skillet out of their grasps; took their lumps and bettered them. It is a proud legacy, which, even if matched, probably will never be exceeded.