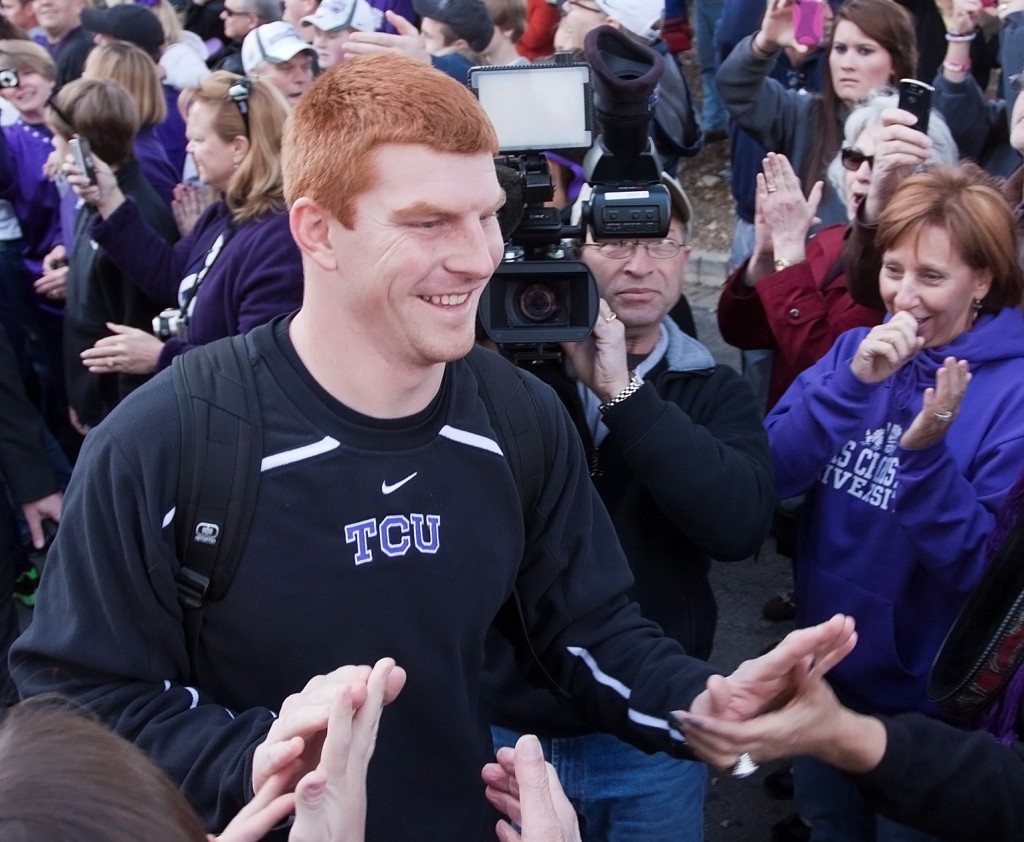 Dalton embodied the Frogs' success since 2008 as no other. (Photo: Keith Robinson)

No single Horned Frog since LT has come to define TCU's success over multiple years like Andy Dalton has defined it since 2008. The red-head saved his best for last, his QB rating exceeding 166 this season, while turning in the fourth-best rush totals on the team. Jeff Ballard's best mark was 138 in '06, with significantly less effective running. And when it mattered most-- on the road at Utah, and in the Rose Bowl-- Dalton was near perfect. He said all year that he and his team wished most to win another chance in the BCS, and to make the most of it, and they did just that. En route, Dalton made the fast-rising signal callers at Baylor and Utah look silly. The quarterback led his team to a second consecutive perfect regular season, and in sharp contrast to last year, Dalton took his team onto his shoulders in the bowl, and led them to victory. The senior thoroughly outplayed his counterpart Badger, who had won the senior quarterback award for the season. "I knew everything they were doing," said Dalton of the Badgers. Wisconsin's quarterback, in contrast, couldn't thread the Frogs coverages often, on those pass attempts when he wasn't being slobber-knocked by purple-clad defensemen. In end Dalton held the better trophy: Rose Bowl Offensive MVP. Likely he'll enter the NFL as a draftee. TCU will miss this senior's experience more than any other's in years. 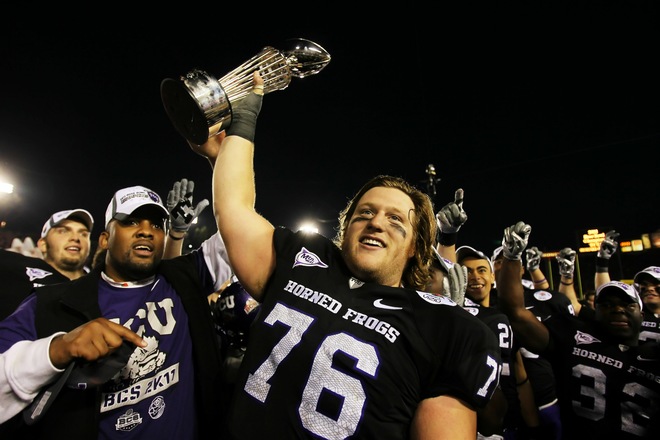 When Blake Schlueter ascended to starting center in 2006, Jeff Ballard said of him, "There is no more imporant man on the team." Schlueter proved his worth, and his replacement, Jake Kirkpatrick, bested it, and snagged the hardware to boot. The Rimington winner's offensive line allowed its QB to be sacked only eight times, and none at all when the spotlight was brightest. Led by Kirkpatrick, a new father, his line seamlessly replaced injured starter Zach Roth at right end, and Kyle Dooley at left guard. This crew of upperclassmen and their fearless leader paved the way for 5.4 yards per carry on the ground, up from 5.2 in '09, which was itself a stellar year for the Frogs' ground attack. 5.4 ypc matches Air Force's '07 tally, which is the highest in the MWC since TCU joined in 2005. 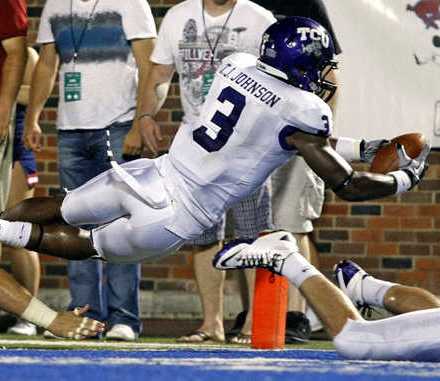 Safety Tejay Johnson has scourged opposing offenses for four years, three of them as the quarterback of the secondary of the nation's leading defense.

TCU has fielded the nation's leading defense three years running, and no small part of that sustained dominance on the field is attributable to Johnson's quarterbacking of the defense from his spot at free safety. For years Gary Patterson has said his team plays better when Johnson is on the field to help get players to the right spot before the snap, and looking for the play after it. No defenseman will have been harder to replace than Johnson is, with his graduation and impending exit in the draft. 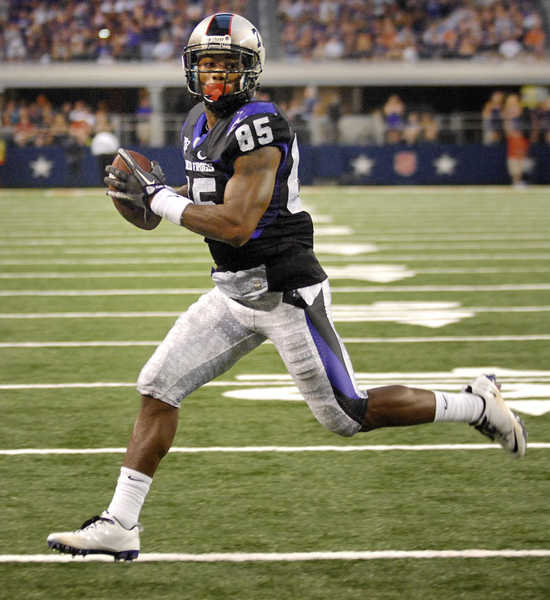 Since joining the Mountain West, TCU has fielded the all-conference return man every season. The last three of those were Jeremy Kerley, who, despite a statistically smaller sum of return yards than Utah's Shaky Smithson, commanded greater respect from the MWC's coaches. Troy Calhoun so feared the speedy Horned Frog that he preferred his quarterback pooch-kick away on fourth down instead of a traditional punt to Kerley.

While the Wimple eschews double awards as a rule, an exception is necessary here. Both of these young men unexpectedly spent time in the background-- Young moving inside this season as the passing game grew to highlight what had been his signature role, and Jones battling a hamstring injury most of last season. Young was unfailingly unselfish, and became a reliable blocker for his receiver brethren. Jones re-won his starting spot at safety for 2010 and made 80 tackles-- second on the team. In some games the senior seemed to be in the backfield more than the opponents' runningbacks. Young and Jones quietly powered the Frogs' dominance on both sides of the field.

Junior of the Year: Tank Carder

While Carder's signature moment (so far) came to clinch the Frog's final victory of the season, the linebacker's play has been notable all season. The junior's stat line doesn't jump out at you (60 tackles, 12 for losses, 5 passes defended, 1 interception) but Tank's growth into the patriarchal role of top linebacker in a defense that has had its last four top 'backers drafted is plain to see on the field. He simply owns the middle of the field, and will be atop every short list for defensive pre-season awards in 2011.

Sophomore of the Year: Ed Wesley

Perhaps no scholarship player on the Horned Frogs' roster came to school with less fanfare than Ed Wesley. The Wimple clearly recalls derision towards this young man's size among regulars at the team's Rivals page. The scuttlebutt was, in 2007, that the Frogs could not bring real talent at runningback to the campus, so Wesley was going to have to do, and that was a shame. And a shame it was-- but not in the way those know-it-alls thought; turns out, the joke was one them. Not long into Wesley's redshirt year reports began leaking out of practice that this kid was hard to bring down. He proved effective beyond his billing as a freshmen, tallying 6.3 yards per carry for 638 yards. But Ed Wesley really turned on the jets in 2010. Still sharing carries with two tailbacks, this year Matt Tucker and Waymon James, the sophomore from Irving upped his per-carry average to 6.5 yards, and was the first Horned Frog to best 1,000 yards since 2003.

Two positions in Gary Patterson's defense are not typically given to freshmen to play: defensive end, and cover corner. In both spots this season freshman (Maponga after a redshirt year, Olabode after just a few days at the end of camp) played, even started (Maponga at DE). This speaks as much of the young mens' football smarts as it does athletic ability. Perhaps just as remarkably, opponents proved mostly unable to capitalize on these players' inexperience. By the time the team rolled into Pasadena, these two players were seasons vets.