In many ways, 2010 was set up to be the Mountain West's coming-out year. Its champion had claimed the non-cartel autobid two years running, and its Big Three were bigger and better than ever (BYU's rebuild notwithstanding). And then the other feet (yes, that's plural) began to fall

, and suddenly the Mountain West began acquiring a certain wacishness, a "haven't we seen this somewhere else" look. Out went Utah, in came Boise. BYU tried to upstage its rival, first by blowing up the Mountain West, then fleeing it. Somehow Nevada and Fresno State were suddenly sitting at the MWC table, and the WAC was feverishly trying to douse the fuse.

So by the time kickoff finally came around, the Mountain West no longer looked at 2010 as its coming-out party. The cartel had, again, won. Peeling off Utah and BYU, the cartel outflanked the MWC's challenge to widen access to lucrative BCS money and bowls by an entire conference. A couple top teams? Sure, there's wiggle room for that change; but an entire conference? Not a chance. Boise State and TCU were left dangling in the breeze, their conference still safely outside the cartel. TCU won ascendence into the cartel later, but only after the threat of a seventh conference claiming a seat at the cartel's table by right had fizzled.

And so instead of a triumphal march for a vigorous cartel-busting crew, 2010 was more a swan song; a dirge. The cartel was going to be dead, but instead it long lives. The MWC's bottom-feeders will remain content to subsist on about one tenth the fodder given to the bottom-feeders among the cartel; the MWC champ will remain forced to achieve perfection, or settle for the Las Vegas Bowl.

Those bottom feeders were, again, New Mexico, Colorado State, Wyoming, and UNLV. But four programs more different (records notwithstanding) one would be hard to find. 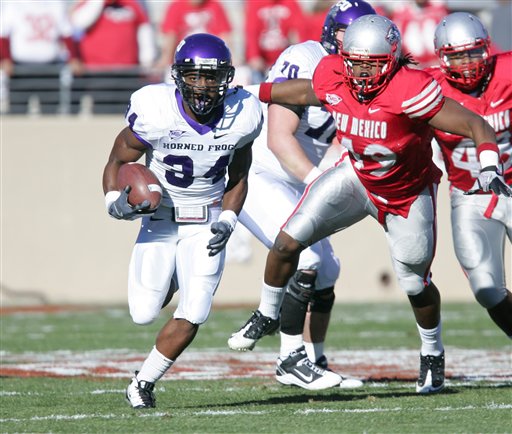 Instead of anchoring a run-stopping front, Ugo Uzodinma (pictured) and the Lobos let teams run over them. (AP Photo/Jake Schoellkopf)

The bottom of the heap is New Mexico, which is in such complete disarray one hardly can discern the beginning from the end. Mike Locksley, while clearly gifted on the recruiting trail, is just as clearly at a loss when wearing the skipper's hat. Were his school able to scrounge up the more-than-$1- million buyout on his contract, he'd be back where he has succeeded before: an offensive and recruiting coordinator at a program located somewhere other than Albuquerque. And his successor would have inherited a talented roster, highlighted by playmaking quarterback Stump Godfrey. Godfrey, a true freshman, burst on the scene at the half-way point of the season, after starter B.R. Holbrooke, and backup true freshman Tarean Austin went down with injuries. The young quarterback led the Lobos in their only win against Wyoming a few weeks later, passing for two touchdowns and running for a third. The freshman is the only player on the roster with a positive touchdown-to-interception ratio in 2010.

Godfrey got little help on the ground, from either his offense or defense. Senior leadership on the lines couldn't improve UNM's push in the trenches; three offensive and two defensive starters up front were seniors. The offense managed only 2.9 ypc, somehow down from 2009's 3.3. Despite an influx of transferred and recruited talent on the line with Illinois transfers Reggie Ellis and Ugo Uzodinma and recruit Calvin Smith on the depth chart, the rush defense went from bad (165 ypg allowed in 2009, MWC second in tackles for loss, fourth in sacks) to catastrophic (250 ypg in 2010-- the worst in 1-A-- and second to last in MWC in sacks and tackles for loss). The pass defense wasn't awful, but teams didn't need to test it very much. Only one starting wide receiver was a senior (Bryant Williams, who led the team in catches), so the returners at QB and WR will have familiarity withe system, what hope that gives. It's mostly Locksley's players now, and with a 2-22 record for their coach, they truly have nowhere to go but up. Whether the move in any direction at all, however, has looked likelier. 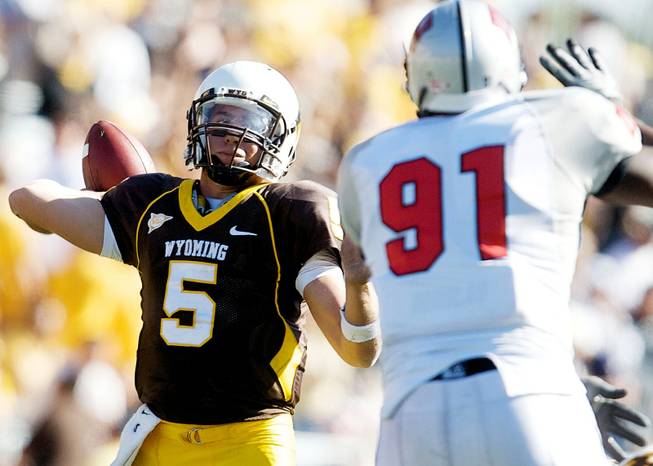 Wyoming's playmaking QB transferred away at the end of 2010, leaving a huge void in Laramie.

Wyoming also failed to achieve the better returns for which it was scheduled in 2010. True, the roster was smaller than usual (at one point this season, only 60-something Cowboys were on scholarship) but the schemes were not new any longer, the quarterback wasn't a true freshman anymore, and several good receivers had joined the ranks. The death of freshman linebacker Ruben Narcisse threw the program off kilter shortly after the season began. Wyoming never got back on track. The passing game averaged six yards less per game; the rushing game almost twenty yards less. The defense was just as porous, and with to punctuate the bad season, Carta-Samuels and safety Shamiel Gary, perhaps the best playmakers on either side of the ball, quit the team.

Bright spots? Wyoming triumphed over rival Colorado State, 44-0 to close the season. Sophomore Alvester Alexander was electric late in the season, average 18 carries for 120 yards in the last four games of 2010, the best in that span coming against SDSU-- not a weak defense. Junior Josh Biezuns took to defensive end well, leading the team in sacks and tackles for loss. The team is very young, and has another year of good grace for Coach Christensen to find a few sparks in its aerial attack before howls begin for his ouster. 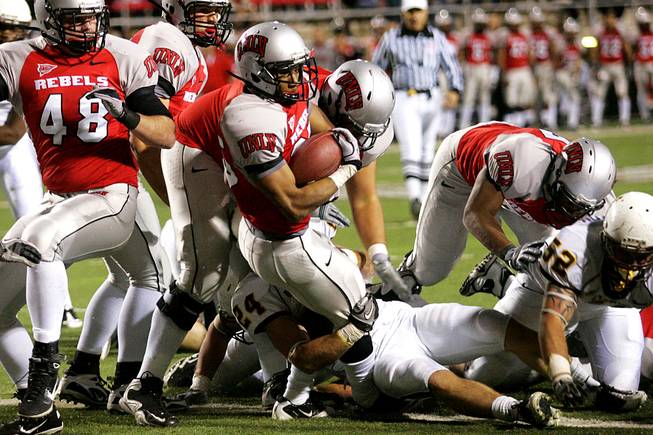 UNLV played like a team unsure of its identity. And no wonder: it was hurled from Mike Sanford's shotgun spread towards Bobby Hauck's (better, Rob Phenicie's) ground- and clock-eating game. The Rebels didn't make it all the way there. Truth is, they never quite made it all the way to Sanford's offense, either. The first year results in Las Vegas were painful. The offense scored about a touchdown less per game than it did in '09, and the defense gave up about a touchdown more. The line allowed about 1.5 sacks more per game over '09, and paved the way for a paltry 3.0 yards per carry, down almost a full yard from '09. By the eleventh loss, Sanford's back-to-back 5 win seasons didn't look so bad.

The good news, similar to Wyoming's, is that the team is young. Granted, the 2010 starters didn't make many waves, but except for QB Omar Clayton, the offensive skill starters all return. The defense, on the other hand, will be substantially remade this offseason, as multiple starters graduate from all three levels, including the team's top four tacklers, S Alex DeGiacomo, LB Ronnie Paulo, LB Starr Fuimaono, and LB Calvin Randleman. 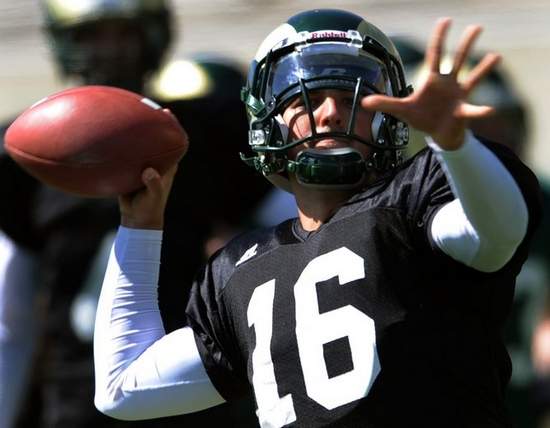 Freshman Pete Thomas laid a solid foundation for a terrific career at CSU.

The MWC bottom-dweller with the brightest prospects for quick improvement is Colorado State. The Rams knew they were in for a steep learning curve in 2010, with a true freshman at quarterback (Pete Thomas) working behind five new starters on the offensive line. Thomas was sacked 44 times in 2010 (six fewer times than Andy Dalton in his whole career!), and threw two more interceptions (13) than touchdowns (11). CSU's linemen allowed room only for 3.5 yards per carry. And despite all that, the freshman completed almost 65 percent of his passes. He and his four returning linemen have more upside perhaps than any returning squad in the conference.

The defense didn't help the offense much, allowing over 34 points per game. Its front couldn't stop rushing attacks, allowing teams to average almost 200 yards. Senior tackles Guy Millier and Ty Whittier, absent for some games at the beginning of the season, did not live up to their billing as run-stuffers; Nuku Latu ended the season ahead of Whittier on the two-deep.

Similar to Wyoming's situation, Steve Fairchild has another year of good grace from the fanbase to develop his players and produce results on the scoreboard. The returns in 2010 were disappointing, but given the inexperience in key positions on offense, forgivable.