Share All sharing options for: Mountain West 2010 Retrospective: The Middle’uns

Air Force, San Diego State, and BYU each beat all of the four bottom feeders in the conference. What San Diego State, BYU, and Air Force could not do was beat TCU or Utah, and that is what made them all "middle'uns" in 2010.

AFA and SDSU would tell you they also both beat BYU, but the record book indicates only the Falcons did; the mini-scandal surrounding BYU's victory over the Aztecs has largely faded away, aided by the "makeup" replay miss in the Holy War that may or may not have cost the Cougars a final conference victory over the Utes. What came around, went around, and more or less the score evened out. 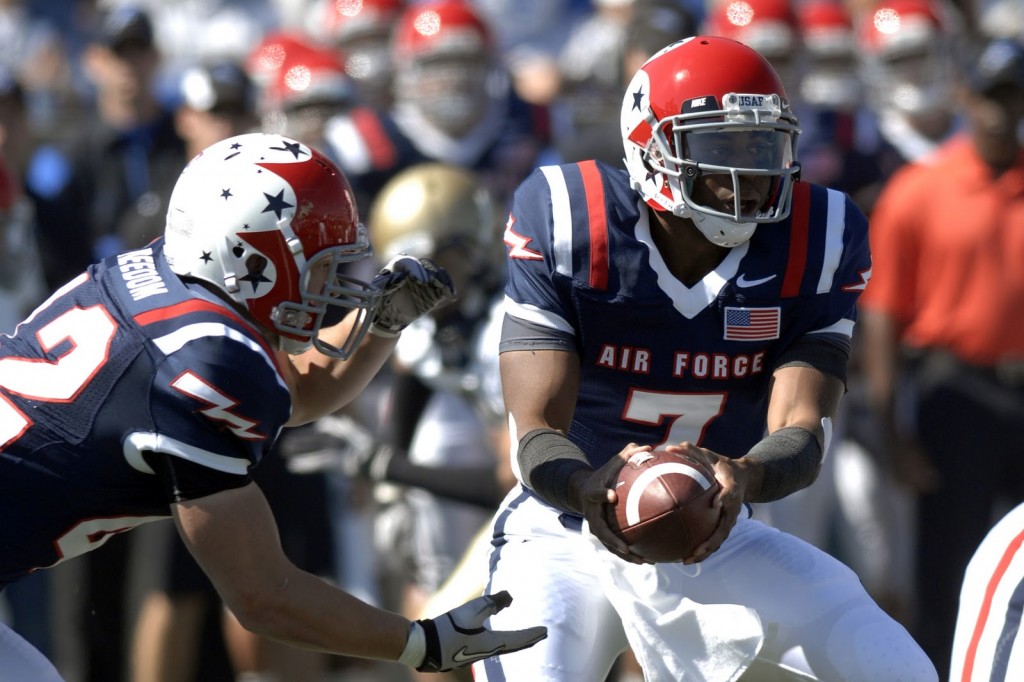 The Mountain West came this close to two major non-conference wins in Columbus and Norman. Missouri Tiger T.J. Moe sprung free (aided by a badly missed call) for a last-minute 68 yard scoring run to secure the win against the surprisingly punchy Aztecs. Earlier that afternoon, Air Force out-gained, out-ran, out-held, and in the end, out-mistaked Oklahoma to lose by three-points. These losses (add SDSU's heart-breaker in Provo) kept AFA and SDSU out of the polls, and dinged the MWC's reputation just enough to keep TCU out of the national championship discussion two months later.

The Wimple was not surprised that the Falcons and Aztecs were formidable. Air Force returned every one of its ball carriers from 2009, and runs the kind of attack that isn't crippled by wide scale turnover on the offensive line. Clearly Coach Calhoun's scheme is humming at a high pitch; his junior-heavy roster is the most talented in many years at Air Force. The team did have to revamp its defensive line, and wasn't nearly as stout against the run as it had been used to with Ben Garland in the middle. But its opportunistic secondary, led by Reggie Rembert, was supposed to be frightful enough to keep teams predictable. That vulnerability began to show in the sixth game of the season, when Garland's replacement, Ryan Gardner, could not play for injury. Colorado State travelled south to Colorado Springs, and out-rushed the Falcons, despite losing 49-27. AFA encountered phenom Ronnie Hillman the next week in San Diego, and lost. More troubling, Ryan Lindley had a pretty good passing day against the Academy.

The following week in Fort Worth the Falcons were thoroughly stymied. After trading scoring drives, TCU outgained AFA 485 yards to 173, 27 first downs to 9, 30 minutes to 24, and most importantly, 31 points to 0. AFA's losing streak extended to three in a frustrating 5-point loss in Salt Lake City, before the Commander-in-Chief trophy win at Army, and a couple gimmes against off-the-rails New Mexico and UNLV. The Falcons' bowl win against Georgia Tech capped the most successful season at the Academy in many years. 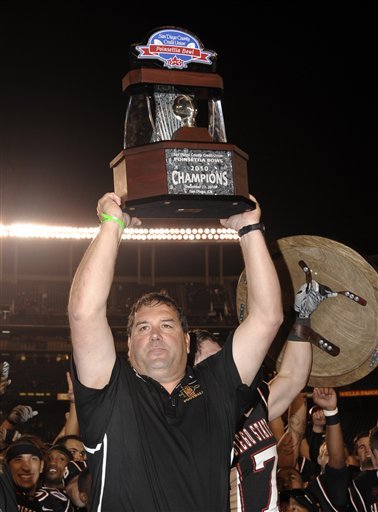 Brady Hoke's last year at SDSU was a breakthrough for the program. (AP Photo/Denis Poroy)

Also enjoying its most successful season in many years is San Diego State. In February, the Wimple predicted that "the Aztecs are precisely one viable running threat away from the promised land," and proceeded to highlight the offensive line as the unit most important in the development of a rushing attack. As it turned out, the JUCO transfers were the spark for a better push up front, but not because they stepped in and took care of it themselves. Instead, the returning starters returned to the weight room and emerged stronger and more determined to keep their jobs. The five of them-- LT Tommie Draheim, LG Alec Johnson, C Trask Iosefa, RG Nik Embernate, and RT Kurtis Gunther-- did not miss a start. With Brandon Sullivan at fullback, they made room for SDSU to double its rushing output in 2010, and to feature for the first time in many years a balanced attack.

And then there's Ronnie Hillman. The MWC Freshman of the Year proved to be Brady Hoke's best choice as head coach at the Mesa. Hillman's other suitors recruited the Californian as a receiver; only San Diego State would promise him a rushing role. SDSU further stuck with the young man through an admissions snafu, and the results were tremendous. Ronnie Hillmans's 1,532 rushing yards is third-best in a season in MWC history, and the best since 2001. Unquestionably Hillman's effort made the difference in 2010; that he was helped by better line play, a good fullback, and a complimentary passing attack is immaterial when valuing his worth to San Diego State. Ronnie Hillman is the most dangerous runningback in the conference, and may be the single most valuable player to his team in the conference.

Only Utah, TCU, and nagging injuries slowed the freshman. Hillman was big in big games, tallying 228 yards at Missouri and again against Navy in the Aztecs' first bowl since the Clinton presidency. He led in SDSU's big conference win-- against Air Force-- rushing for 191 yards and two touchdowns. 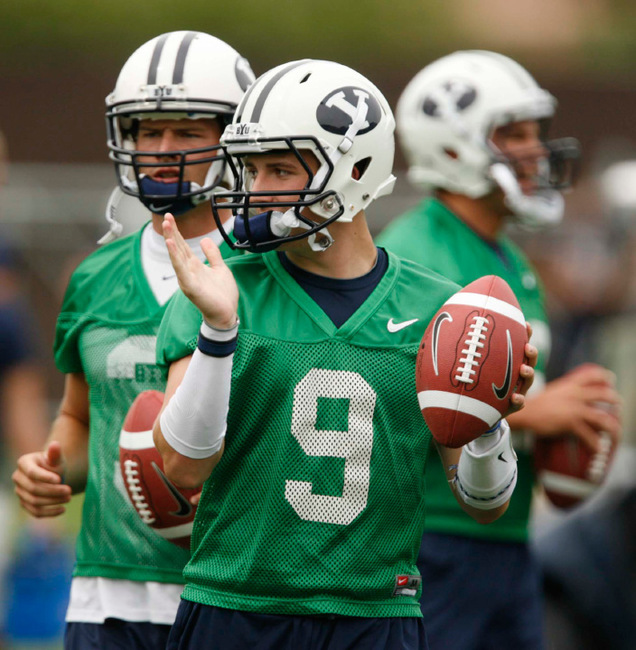 Unlike Air Force and San Diego State, BYU found it necessary to performed a mid-season salvage operation, saving its season and much of its dignity. Heralded true freshman Jake Heaps, despite early enrolling, found the college game too fast and too complex at the beginning of the season. Junior Riley Nelson proved unable to smooth the transition and was knocked out for the season after three games. Through seven games, Heaps through one touchdown and six interceptions. The rushing game wasn't effective enough to make up the difference, and when the Cougars found themselves 1-4, having lost at Utah State, heads began to roll. Truthfully, Nelson's had been first, after three games. The junior did not choose season-ending surgery until after he had been demoted to backup quarterback. Menhenhall fired his defensive coordinator Jaime Hill after the Utah State loss, and assumed those reins himself. The result was immediate: BYU held Ronnie Hillman to 62 yards and no scores. The effort was almost enough for the win; some blatant home-cooking in the replay booth provided the rest, and BYU stopped its losing streak at 4.

BYU lost in Fort Worth the next week, but showed its rush defense was for real, holding TCU to just 43% of its season average rushing. Heaps added the magic touch from then on, almost doubling his quarterback rating, which was a tepid 80.2 through the TCU game, and a tremendous 154.9 afterwards. BYU won out, except for a close loss to Utah, and could hold its head high while exiting the Mountain West.