Share All sharing options for: Mountain West 2010 Retrospective: the Peaks

Peaks has to be plural, because in the conference, Utah beat 'em all too, except TCU.

Utah wasn not ranked to start the season, but steadily moved up to #5 after outlasting Pittsburgh in overtime, and thoroughly dominating its next six foes. Its 68-27 dismantling of Iowa State in Ames raised eyebrows nationally, landing the Utes on the short list of possible BCS busters. Jordan Wynn started six of Utah's first eight wins, with a quarterback rating of 161.8. TCU started the season ranked high (sixth), and rose from there, coming to Salt Lake City ranked third-- its highest ranking since the 1950s. Andy Dalton only improved after his double-interception start against Oregon State, and flew to SLC with a 163.1 QB rating. 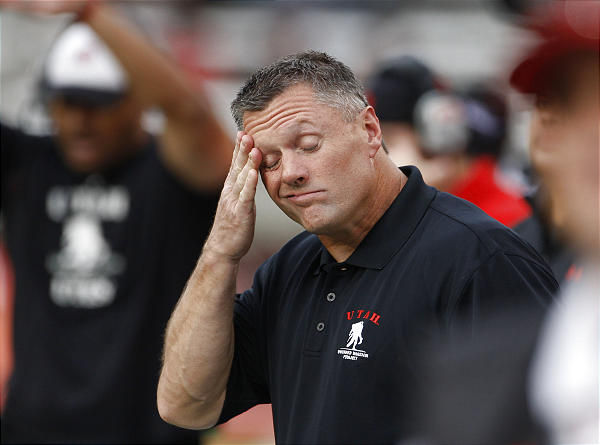 Kyle Whittingham and the Utes, ironically clad in the image of a wounded warrior, never recovered from the pounding TCU gave them in Salt Lake City.

At last came the head-to-head between TCU and Utah, every bit as hyped as the previous year's tilt. The third-ranked Frogs matched the highest ranked team ever to travel to Salt Lake City. ESPN Gameday and the second-biggest crowd in Utah's history on hand had last year's mowing of the Utes in Fort Worth was fresh on the mind, and nobody expected a similar game.

From there two the teams went different directions-- TCU to triumph in the Rose Bowl, the most dominant conference champion in MWC history for the second year running, Utah limping to a 2-2 finish to its tenure in the MWC, its once-proud mastery of the conference a fast fading memory. Jordan Wynn missed the Las Vegas Bowl (which Utah lost 26-3 at Boise State's hand), his TCU-to-finish QB rating 45 points lower that the pre-TCU version.

This was not the valediction Utah planned for 2010, its final season in the Mountain West. Yet it retained its accustomed top-tier finish in the conference, having lost only once to a MWC team this season. Perhaps the disappointment centers in Wynn, who likely has endured his sophomore slump. His junior year is Utah's inaugural in the Cartel, and with the their exit, the Utes leave the Purple Wimple's cognizance, unless the new Pac-12 member chances to catch the Frogs in a bowl. Las Vegas 2011, perhaps? Until then, if ever, happy hunting, Utes. No team (except perhaps Boise State or TCU) has done more damage to the Cartel.

The senior-laden Frogs clobbered the Mountain West in 2010 more thoroughly than any team beat up its own conference in at least five years. TCU out-gained its MWC foes by an average 313 yards per game. Boise's best mark over the WAC? 2010's 262 yards per game. That's the same yardage differential that TCU notched in the MWC in 2009, making TCU's two-year span over the MWC a reign of terror unlike any in at least the sport's last five years.