First in the spring series of previews of each of TCU’s opponents (in the order they complete spring drills) is the Air Force Academy. Come 2011, AFA may feature its best offense in a generation, given the amount of returning experience it will have on that side of the ball. Four starting linemen, the quarterback, both tailbacks, and three of the four receivers on the two deep return. Really there is only one key cog to replace: fullback. 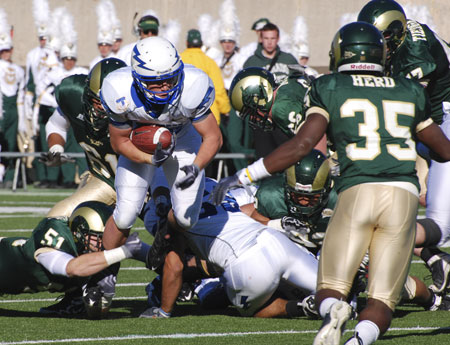 AFA is auditioning three tailbacks and one a third-string backup at fullback to replace Jared Tew (pictured) and Nathan Walker's production at fullback.

But the Falcon attack, that's a big piece of the pie. Seniors Jared Tew and Nathan Walker took 31 percent of the Falcons' carries for 27 percent of their ground yards and 25 percent of their rushing touchdowns in 2010. Three converted tailbacks, juniors Wesley Cobb and Anthony LaCoste and Brent Michaels are in the running to replace that production. LaCoste and Michaels came to mind when Calhoun hinted in February that fullback "might be one of those spots where a young guy might be able to come in and get some snaps." Cobb, who has a season of practice at the position, seemed to be in the lead early. He is a touch small at 5-8, 195 pounds, hoping for 215 by August. "I’m a little undersized but I bring a degree of tenacity," Cobb said. He says may have to settle for 205. Junior Mike DeWitt (who was out most of last season with a knee injury), DeWitt is bigger, at 6-1 and 215 pounds, and is the only player who came to Air Force specifically to play the position. He is still practicing with a knee brace, but said that he should ditch the brace after spring ball.

There are a few more questions in the defense. First is who will replace Reggie Rembert at corner. "You’re talking about a guy that started three-and-a-half years, a bunch of experience, and I think that’s where you miss him most – he has seen a lot," defensive backs coach Charlton Warren said about Rembert. "Now you’ve got to play with guys who are capable but don’t have quite the experience. So we’re going to have to give them a ton of reps." There is some experienced depth returning at the position, with Chris Miller, Josh Hall and P.J. Adeji-Paul (a safety in 2010). Chris Miller, a freshman last season, got some playing time on defense last season. He appears to lead the pack in 2011. Miller, P.J. Adeji-Paul and Josh Hall are the top three candidates to fill the spot.

Inside linebacker looks like a win-win at Colorado Springs, where four players are competing to start, three of whom have a wealth of game experience. Brady Amack and Jordan Waiwaiole started last year but are assured very little this season. Ken Lamendola is back from injuries that kept him out in 2010, and Austin Niklas seems ready to compete for a starting spot as a junior next fall. All four players have rotated with the starting defense during spring football practices. "We’ve got some guys that have been between the lines for us a little bit," defensive coordinator Matt Wallerstedt said. "We’ll be deeper there and more experienced there than we’ve been since I’ve been here."

Waiwaiole and Amack finished first and third in tackles in 2010. Lamendola shone as a sophomore, leading the team with 118 tackles, but was out for most of 2009 and all of his 2010 season with injuries. Lamendola, who plays at 6-2 and 230 pounds, finally practiced during spring ball, in a rare extension of eligibility at the Academy. He was granted an extra semester that allows him to complete his academic and military requirements and play football in the fall. Air Force coach Troy Calhoun is hoping Lamendola can play like he did during his sophomore season. 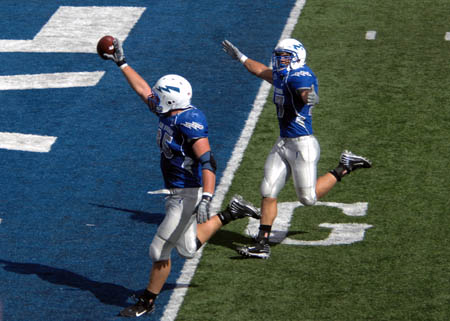 LB Ken Lamendola is again in the mix to start on the Falcon D.

"I'm getting better every day," Lamendola said. "I think I was more cautious leading up to spring practice. It was a little iffy how I was going to do. I haven't played in a game in a year and a half... I was in the wheelchair for 2 1/2 months... I could touch my fingers when I'd put my hands around my lower leg," Lamendola said. "I didn't like to see that, or anyone else to see it." When he returned this spring he was thrust right back into a rotation with the other three inside linebackers on the first and second team. "I’m feeling good," Lamendola said. "It has been fun. I was a little rusty, but I’m getting it back slowly."

Don't look for true freshmen to get many snaps; Troy Calhoun has always said that he prefers to field teams full of juniors and seniors, and for the first time in his tenure, he can do exactly that. AFA Air Force will play Notre Dame and Boise State this season. "There has to be a balance in scheduling for us," Calhoun said, "but I don't think the deck is stacked against us. You better believe we have some good cards in our deck too."

Calhoun talks big about balance he sees in the schedule, but the fact remains his Academy has a grossly imbalanced schedule. After a warm up against South Dakota, AFA gets TCU at home. And that's good news-- the Frogs will be rebuilding their offense almost completely, and have never dominated the Falcons in Colorado Springs like they have in Fort Worth. After a bye, AFA gets another gimmee when Tennessee State comes calling.

Then the chips turns decidely against the blue and white. They travel for the first time to start October to Navy and to Notre Dame before returning home to face San Diego State, somehow keeping the next week's inaugural conference match at Boise State off their minds. The month ends with welcome breather-- at New Mexico. One win in October is an all-too-real possibility; one loss (Boise State) is almost a certainty. Honestly, AFA will call 2-3 fair, 3-2 a good turn, and will be ectastic if it only has to sport one October loss for Halloween.

Army, Wyoming, and UNLV all play at Colorado Springs in November, and the season ends with the grudge match at Fort Collins.

Realistically, the best case for Air Force is 10-2 and its first trip to the Poinsettia Bowl. The Falcons are going to lose at Boise State and at least once to TCU, Notre Dame, San Diego State, or Colorado State (don't laugh). For a better year than that (and it's been a long time since any service academy has had a better year than that) the Falcons are going to have to be lucky. They're talented and experienced enough to earn nine or ten wins without relying on so fickle a friend as fortune; should the ball bounce their way in 2011, undefeated is only a possibility if Kellen Moore is injured, Notre Dame doesn't improve, Ronnie Hillman has a sophomore slump, and TCU's young starting quarterback hasn't pulled it together by week two.