All eyes will be on the defense, whose new mastermind is Phil Bennett, ex-SMU head coach, via a successful stint running Pitt's defense. Wacoans are on the bandwagon. "Phil knows how he wants to coach and how to get it done," head coach Art Briles said 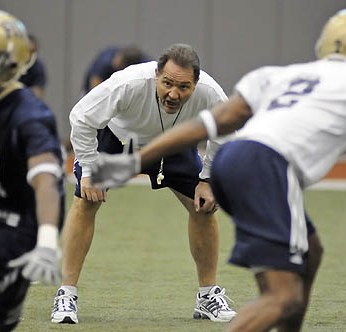 Phil Bennett takes the reins of the miserable Baylor defense.

not intending to up the pressure on his newest best friend in any way, surely. Bennett inherits a defense that was, simply put, bad. From 2009 to 2010, it got even worse in four of the seven defense statistical categories measured by the NCAA—pass defense, pass efficiency defense, scoring defense, and total defense. In other words, your humble Wimple could have passed successfully against the Bears. The improved categories? In only one did the Bears improve to top 80th nationally— Baylor had the 79th best rush defense. The weight of this legacy is not lost in Waco. Bennett said, "I asked one of the kids if he had played on a great defense while he’s been at Baylor, and he said, ‘No.'"

So what's the new coordinator going to do? "Get the best athletes on the field," says Bennett. I think we’ve got guys who are athletic and hungry and can run. We’re definitely a work in progress, but I see some very good possibilities. I’ll be extremely disappointed if we don’t come a long way by April 2." Getting them all out there has entailed a laundry list of position changes, especially along the defensive line. 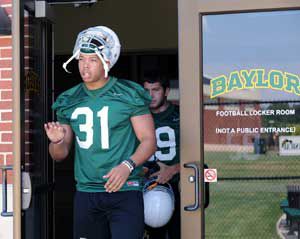 Chris McAllister, once a linebacker, is now a defensive end. "It’s a game of speed, and Chris McAllister reminds me a lot of (Oklahama defensive end) Jeremy Beal," Bennett said. "With Tevin Elliott and Gary Mason, I think we’re going to have a good combination of ends." McAllister has added about 15 pounds since the end of last season and now weighs 255. "At defensive end, you’ve got to make sure nothing gets outside of you, so there is a lot of responsibility there," McAllister said. "I’m getting better every day at the little things and learning the techniques. Coach Bennett’s defense is all about alignments and stuff. It’s real intense and it’s going to work." McAllister has gotten a lot of snaps, with Gary Mason and Tevin Elliott and tackle Dominique Jones all sitting out spring with injuries.

In the interior, where Bennett is looking for a big body to replace Phil Taylor, the Bears switched two offensive players, fullback Kaeron Johnson and lineman Nick Johnson to defensive tackle. "They’re both big 300-pound athletic guys," Baylor defensive coordinator Phil Bennett said. "They’re strong, and Kaeron is physically off the charts in about all our testing. Nick has come in this spring (from Navarro College) and has a future. He’s a little raw right now, but has a lot of want-to." The move reflects a near-universal facet of the college game. "Finding defensive linemen is tough, and when you have a guy who can contribute, you put him there," Briles said.

Baylor should still have some depth at defensive tackle with the Johnsons joining veterans Tracy Robertson, Nicolas Jean-Baptiste and Dominique Jones and young players like Sean Watson and early enrolled Trevor Clemons-Valdez. "Right now, we’re mixing and matching and trying to get the best guys on the field," Bennett said. "I really believe we’ll have four or five guys who can play defensive end. Tracy and Kaeron are both getting better." 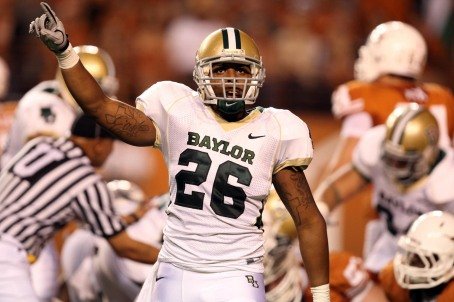 The Bears are rebuilding their linebacking corps around Rodney Chadwick.

At linebacker, the depth chart could hardly be more fluid, and their coach new to Baylor, but not to Phil Bennett. Jim Gush worked with Phil Bennett at SMU, Kansas State and Iowa State. With McCallister's move to the line, exactly two players from the 2010 two-deep remain: Rodney Chadwick and LeQuince Call. Position switches bring two new outside linebackers—safety Prince Kent and quarterback Brody Trahan. Chadwick started last season; Kent played with the twos in the secondary. Elliott Coffey started in 2009 and probably will start again in '11 at middle linebacker. Trahan and Bryce Hager are pushing the older players; Trahan even taking snaps with the ones.

Which leaves the secondary—much maligned, and deservedly so in 2010—and very young in 2011. The elder statesmen is safety Mike Hicks, fully a junior. Tyler Stephenson (a ripe old sophomore) and redshirt freshman Chance Casey look to start at each corner. Sophomore Ahmad Dixon probably will be the other safety. This group will be hard pressed to be worse than their predecessors—but not because they're not trying. Every quarterback on the roster passed with ease this spring, even Nick Florence. The spring game did feature five sacks, six TFLs, and six consecutive scoreless possessions despite a few bogus first downs in an effort to create more snaps for the offense.

"Fear of failure is a great motivator," said Bennett. And failure happened this spring—the offense's 587 yard spring game was a 300 yard improvement for the defense over one of the scrimmages. There is plenty of motivation to go around on that side of the ball in the leadup to 2011. 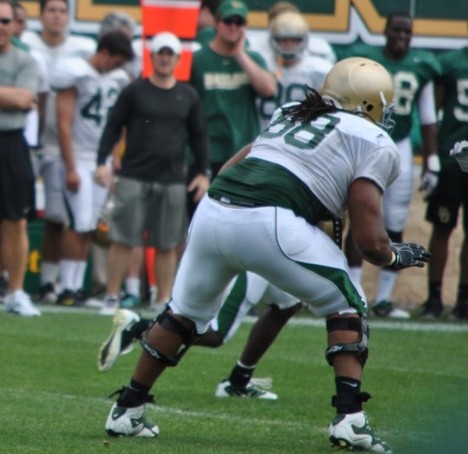 Cyril Richardson moves to left tackle in '11, and is the young gun on a very experienced offensive front.

On offense, the only real question is at runningback, because so much of last year's machine returns. Only left tackle Cyril Richardson is new to the line, replacing Danny Watkins. Briles thinks Richardson "will be a force in the Big 12 this year," Briles said. "We’re not waiting for him to explode in two years. He’s dang good and physical and strong." Pro-turning DT Phil Taylor remembers Richardson for his size. "He’s a big boy. He’s young and up and coming, and he’s going to be the next good one to play left tackle for us." Richardson, who went from 360 pounds to 320 in the last year, says "The redshirt year kept me in shape and knocked some pounds off me,"

"All five of those guys have started," Briles said, and that may be the second-best reason to be confident the Bears will return to the post season. The line Richardson-Kaufhold-Blake-Griffin-Wade has 76 starts under its belt (Richardson with one start at right tackle), and will try and keep opponents off of Robert Griffin, the quarterback.

They did not succeed in the spring game, but that didn't stop Griffin and backups from having a(nother) field day spreading the ball around. That is, after all, their job. "Last spring, Robert didn’t get to do any of this," Briles said. "To me it's like he's getting ready for his sophomore season because he played, sat, played. So the thing you also have to think about is this is also his fourth year here in spring, so he's got a lot of experience. A lot of game experience."

Part of the Bears' success in passing is a terrific receiving corps. Kendall Wright, who seems to be in his eleventh year on the Brazos, is the unquestioned leader of the pack. Josh Gordon, Terrance Williams, Tevin Reese, Lanear Sampson also all return, and probably Gordon has the best upside of the group. In the spring game, Griffin and Florence and Petty combined to throw for 587 yards and four touchdowns and threw to 17 different receivers. Eight different receivers had at least four catches for the day. Terrance Williams had nine catches for 123 yards and two TDs; Josh Gordon had seven for 69 yards, while Darius Jones and Levi Norwood had five apiece and Kendall Wright (4-91, TD), Antwan Goodley, Tevin Reese and Lanear Sampson each had four.

It is easy to lay the Bears' improvement in passing from 2009 to 2010 (37th to 19th) at Griffin's and his receivers' feet. But the Wimple suspects it had more to do with the Bears' newfound offensive balance (rushing game in 2009: 108th; in 2010: 24th). Because no viable replacement for all-Big12 back Jay Finley has emerged to date in Waco, it seems probable that all aspects of Baylor's offense will suffer next year. Imbalance is a defensive coordinator's best friend, and Baylor may sprout it in spades.

Seniors Terrance Ganaway and Isaac Williams, junior Jarred Salubi and sophomore Glasco Martin are all in the mix to tote the rock next season. Ganaway and Salubi averaged 6.4 and 6.7 yards per carry, respectively, last season. Salubi added 25 catches for 188 yards. Martin was still gaining confidence in his knee after tearing his ACL in 2009. "I’ve been working on getting my knee back," Martin said. "I wasn’t 100 percent last year, and I was kind of limited with my cutting. But I feel like I’ve been getting my cuts back, and I’m also running hard and breaking through tackles. I think I can get the dirty, grimy yards."

"They’re all good football players, so it’s going to be great competition to the end," Art Briles said. "We’d like for one or two to take charge, and I think that will happen as things progress... We will probably be jogging out for the first series against TCU (in the season opener) before we’re really sure who we’re going with. They’re all going to play. We’ll try to make it situational where we can use them as we need them... We’ll put all those guys out there and see what happens."

Seeing what happened in the spring game—the running game was barely discernable—does not bode well for the green and gold this fall.

Baylor throws its questionable rush attack into the fire right out of the chute, opening against TCU in Waco, followed by an off week and a 2A team (Stephen F. Austin) and then Rice to recuperate. Its Big 12-minus-2 schedule opens at Kansas State (which, if RB Bryce Brown isn't allowed to replace Daniel Thomas without the usual ineligible year for transfers, will bea considerably less formidable than last season) and then returns to Waco for Iowa State. 4-1 is a distinct possibility for the Bears prior to Columbus Day. After that, however, things get dicey. At A&M, Texas, at Oklahoma State, then Missouri make three likely losses, if not four, before a breather in Kansas. Oklahoma comes to Waco, and the season concludes at JerryWorld against Texas Tech.

If the Bears generate a running game that passes the laugh test, it'll be a second consecutive bowl season on the Brazos, barely.