The Louisiana-Monroe Warhawks have played football as a junior college since the depression, winning the JUCO 1935 national title. ULM began play as a four year college in early '50s, and won the 2A title in 1987, seven years before jumping into 1A. Although the Warhawks have never bowled, they have flirted with bowls at least twice.

ULM went 6-6 in 2009, and came within a missed extra-point in 2010 from six wins. It still counts its appearances on national TV, and occasionally jumps up and bites a big dog. TCU is the first such beast on ULM's schedule in 2011. 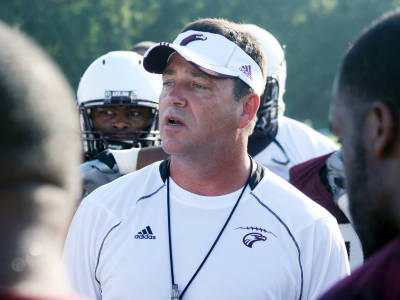 The Horned Frogs are a familiar foe to head coach Todd Berry.

While ULM is unfamiliar to most Frog fans, the Warhawk coaches are very familiar with TCU. Six of ULM's coaches have gameplanned against TCU in recent years, including the head coach, Todd Berry. Berry was UNLV's offensive coordinator and quarterbacks coach from 2007 to 2009, and the head coach at Army from 200-2003. No Berry-coached team has ever defeated the Horned Frogs. Berry brought Leon Lett (defensive line) and John Greico (strength and conditioning) with him from UNLV when he returned to Monroe to coach the Warhawks. Greico had faced the Frogs for four years in Las Vegas; Lett for just one. Berry hired a former Wyoming runningbacks coach, Bryan Applewhite, who coached in Laramie from 2005-2008 (highlighted by the excellent duo Wynel Seldon and Devin Moore). 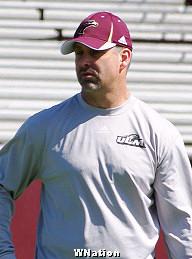 Reffett runs the 3-3-5 scheme that Rocky Long made famous in Albuquerque. Berry noticed his defense was susceptible to the play-action pass, and tried to remedy that this spring. "A lot of it is because we commit so many people to the box, but some of it is our eyes and where our eyes are at and what we're reading," Berry said. "So we worked on some of that today in terms of some of those really strong play action looks that you can get out of some people that are two back with a tight end — that type of thing. You don't see that a lot in college football nowadays so when it comes up it can take your guys off guard, and so we worked on that."

Todd Berry thinks that the variety in schemes—both on offense and defense—in the college game today is the main reason for parity in the sport, and not from the scholarship limitations that the NCAA imposed in the mid-nineties. "The game has changed so dramatically and people don't understand that," Berry said. "So now you've got to pick your route combinations, however many you have, and you have to be prepared to run them against 167 different looks." Berry said in his first year as a head coach an offense might see 20 coverages total in a season. He got to work in more prep than usual this spring for the variety of looks his team expects to see in 2011. Berry had his offense work on reading zone blitzes, and his defense work on play action. "Generally, I've always done it the last practice. I've never done it two practices before, but I feel like we're in pretty good shape." 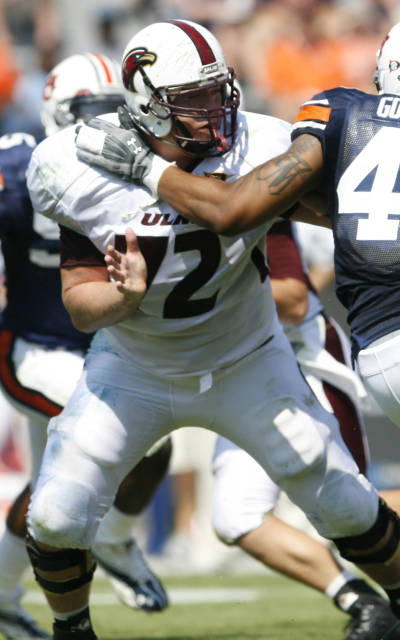 That pretty good shape in running his own offense—a shotgun spread, usually with a tight end—comes largely from the very high number of returning Warhawks. "I'm as excited as I've ever been for a spring," Berry said. "We have so many players coming back that have played so much football. It doesn't mean that we're old. It means we've got a lot of guys that have played alot of football."

Up front, the starting o-line features four players who saw starts last season. The interior—LG Justin Roberts, C Ryan McCaul, and RG Jonathan Gill are the anchors, with 70 starts between them. Gill went to South Grand Prairie High. McCaul was the left tackle in 2010, but now plays center ahead of Josh Allen, last year's starting center. Tackles Patrick Dvoracek and Anthony Montgomery are new as starters.

The line is blocking for returning runningbacks Jyruss Edwards and Centarius Donald. Arkansas transfer Mitchell Bailey was expected to lead the pack after his mandatory year off the field, but he failed to make the post-spring two-deep. Perhaps this is a motivational move for the off-season. The other hot-shot recruit is DeVontae McNeal, who arrives on campus in a few months from Quitman, Texas. These gents have room to improve; ULM managed only the 96th best rushing attack in the nation last season.

All of these players are playing second-fiddle to QB Kolton Browning and WR Luther Ambrose. Browning had the second-highest completion percentage in the conference (61.9%), fourth-highest yards (2552), third highest touchdowns (18), all while being sacked the most (tied with Florida Atlantic's Jeff Van Camp, at 34 times). Browning is something like Colorado State's Pete Thomas, except that Browning can run. He tallied 385 rushing yards (14th best in the conference) in 2010, second best on the team. (Pete Thomas doesn't run, at least not forward. He netted -117 yards last season.) In an interesting twist, Todd Berry plans to use Cody Wells as a second QB in a two-QB system in 2011. Wells saw only about 20 plays last season, but the report from spring was that this scheme looked good. Wells out-played Browning in the spring game.

Dual threat QB Kolton Browning is the focal point of the Warhawks offense.

Wide receiver Luther Ambrose leads a young Warhawk receiving corps. Ambrose's 65 receptions for 752 yards was fifth best in the conference. Tavarese Maye, Anthony McCall, and Brent Leonard return with Ambrose (Leonard, from Keller, is the elder statesman of the group, and is only a rising junior) and bring with them 70% of last year's receptions, and 77% of last year's receiving yards. Browning and his receivers ran the 56th best passing attack in the nation last season. Because they all return, that number should improve in 2011.

Across the trench, coordinator Troy Reffett runs Rocky Long's famous 3-3-5, and emphasized stopping the run, although his '09 Warhawks were much better at it (20th in the nation) than his '10 team (67th). His defensive ends, Ken Dorsey, an all-SunBelt player, and Troy Evans, are returning starters and rising seniors. Evans battled injuries last season, but has reclaimed his starting spot. At tackle, sophomores Kentarius Caldwell (from Richardson) and Emanuel Jefferies have vied for the starting role in the spring, Caldwell winning the top spot.

Behind them, all-SunBelt Cameron Blakes leads the linebacking corps that replaces one starter, at middle linebacker. Senior Jason Edwards is expected to fill that spot, and another senior, Lincston Jones, returns at the third starting spot. 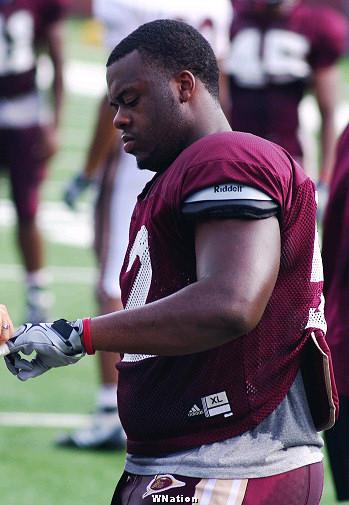 In the secondary, ULM dismissed a returning sophomore corner, and sophomore Vincent Eddie, from DeSoto, will start in his place. Eddie will work under the watchful eye of seniors Nate Brown and Darius Prelow, an all-SunBelt selection in 2010. Prelow has moved to the Warhawks' version of the Lobo back, made famous in Albuquerque first by Brian Urlacher under Gary Patterson's defense, and then by Rocky Long. Prelow is the quarterback of the defense, similar to the free safety at TCU. He plays a hybrid position, coming up to stop the run as often as he can. He's the tallest player in the secondary on ULM's two-deep, at 6-0, and the heaviest, at 204 lbs. Otis Peterson, from DeSoto, is the other corner, and Isaiah Newsome the other safety. Peterson's backup is Rob’Donovan Lewis, a Memphis transfer who has garnered plaudits this spring.

ULM opens at Florida State before a gimme at home against Grambling State. The Warhawks likely will be 1-1 when they travel to Fort Worth for their tilt against the Frogs, and, barring a major upset, 1-2 when travelling again to Iowa. ULM starts conference play at home, after a bye, against Arkansas State, before the road trip to always-tough Troy. If ULM is healthy by then, it may be favored to win both of those. Its second trip to north Texas, this time to North Texas, precedes its second gimme, at home, against Western Kentucky. The rivaly game against Lousiana-Lafayette is in Lafayette this year, before ULM gets both Middle Tennessee and Florida International in Monroe to close out November. If ULM can split those though home games, it may have 6 wins under its belt in time for the season finale, after another bye, at Florida Atlantic. Seven wins are the practical threshhold for bowling, though with new bowl games certified for 2011, six may do the trick. Given good health, this 2011 Warhawks will be the first ULM team ever to go bowling.