As far as the Wimple is aware, the only news outlets that regularly pay more-than-twitterable attention to the New Mexico Lobos have retreated behind pay walls. Therefore this preview is only a preview of those slivers of the spring drills that have drawn notice from the school newspaper—the Daily Lobo—and the Rivals report of the spring game.

Large chunks of a full analysis are therefore out of bounds here, including any look whatsoever at the offensive line—a big issue at New Mexico. Although the defensive line did not draw express attention, the lopsided running totals throughout the spring indicate that it is, again, in sad shape. That’s not good news for long suffering Lobo fans, and their coach, who sits on perhaps the hottest seat in all of D1. 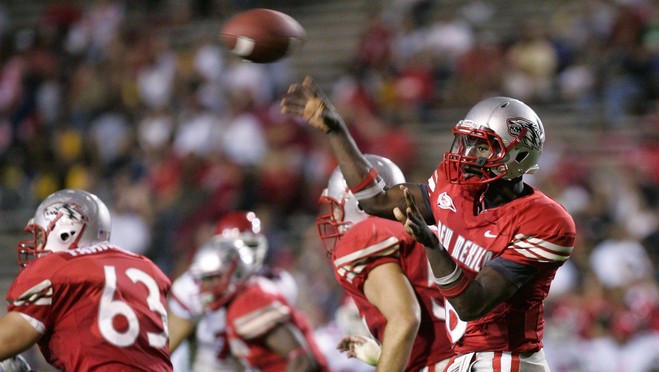 Tarean Austin appears to be the leading Lobo for 2011.

Notwithstanding (or perhaps because of?) the veritable oven under his posterior, Coach Locksley had the usual praise for his team’s athleticism and unity. Locksley did not comment publically about whether or not his offensive and defensive lines can generate more push; his job depends on it, however. After one blowout in a scrimmage, the defense did respond and turn in "probably the best practice we’ve had under my tenure," said the embattled coach. Linebacker Carmen Messina, who had six tackles at that practice, said "We were thinking about what they did to us last time," he said. "It was time for payback. … We wait all week for them to put those red jerseys on. We’re not going to be careful for anybody."

The on-field performance that draws the most focus is at quarterback, where true sophomores Tarean Austin and Stump Godfrey are battling for the starting role. Last year's starter, at the start, was B. R. Holbrook, who spent most of the season injured, watching the shiny newness come off of true freshmen Tarean Austin and Stump Godfrey. Holbrook is again injured, and in non-contact mode for spring drills. He's still the starter presumptive, but only on a technicality. Locksley doesn't let a starter lose his spot due to injury. But when asked about the quarterback battle, the head coach said, "this race will go into two-a-days and, of course, we would like to make a decision as quickly as possible," said Locksley. "I've been pleased with the competition this spring." The competition this spring hasn't included Holbrook, and it appears the team is going to Austin's or Godfrey's to lead, come September. 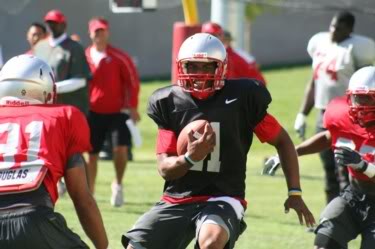 "Tarean [Austin] is a thrower and we were concerned whether he could run the ball effectively. He has proven himself in this style of offense, but that doesn't mean Stump hasn't looked good, too. Tarean has made huge strides in the running game and Stump is coming along as a passer," said Locksley. In first scrimmage, Austin, went 12-of-15 for 165 yards for three touchdowns. "I felt pretty calm," Austin said. " … Once you put the ball in their hands, it’s like a show. Now you’re in the stands." He was injured in the second scrimmage, but returned to be the star of the spring game. Austin had a bad first half of that game, throwing two interceptions. However, he changed teams (does that sound weird to you, too?) at halftime and went 8-for-9 in the second half without an interception. All told, Austin was 14 of 27 passing for 206 yards with two interceptions.

Meanwhile, Stump Godfrey went six of 14 in the first scrimmage, and rushed for 44 yards. He called the quarterback battle between him and Austin "neck-to-neck. It’s like that every day. Neither one of us turned the ball over, and that’s what it’s all about." In the spring game, Godfrey went 11 for 24 with no interceptions, but had no scores. Austin had four.

Neither Holbrook, Austin, nor Godfrey played enough even to register on ESPN’s Mountain West quarterback stats. But of the three of them, only Godfrey had a positive touchdown-to-interception ratio (5:3) and a QB rating over 92.1 (Holbrook’s mark). Godfrey turned in a 117.5. Whichever signal caller starts in September only has to beat very low expectations to look much improved. 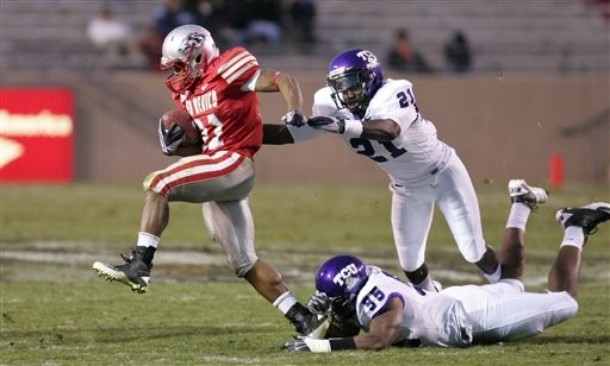 Having confessed ignorance about the personnel and push provided by the offensive line, the Wimple suggests that the Lobo quarterback in 2011 will get slightly more help from the running game in 2011, only because there’s no way the ground attack can be worse than it was in 2010. The anemic Lobo running game managed only 2.9 yards per carry last season, led by Kasey Carrier, James Wright, and Stump Godfrey. I guess doing it yourself isn’t always the worst option. Sophomore DeMarcus Rodgers has impressed this spring. In the first scrimmage, Rodgers tallied 105 yards and three touchdowns. "All spring long, when he gets the ball in his hands, he’s been the guy who’s made plays for us," Locksley said. Carrier, Wright, and Rodgers feasted on an apparently soft rush defense in the second scrimmage, averaging almost 4.4 yards per carry. Locksley said, of the effort, "I thought consistently we were running the ball the way we need to." Godfrey led the pack in the spring game, with 77 yards on only 10 carries. Wright, Rodgers, and Carrier had 179 yards between the three of them, Wright looking the best.

At wideout, the Lobos have reason for genuine excitement. Junior Emmanuel McPhearson moved from defensive back to receiver, and has been unstoppable. Ohio State transfer Lamaar Thomas has finished his mandatory year out, and is showing big play capability. "Obviously he’s a talent," Locksley said. "We’ll continue to game-plan and find ways to get him involved in our offense." McPhearson and Thomas were not part of last year’s passing game, which returns in 2011 almost to a man. Of the team’s regular receivers last season, only Bryant Williams was a senior. Receivers (and runningbacks) accounting for fully 79% of last seasons receptions return this year.

The Lobos have won exactly two games in two years. While bowling certainly would take the heat off of Locksley, the Wimple guesses that probably five wins will buy him another season, especially if some of the losses are not blowouts. That kind of improvement is predicated on a much better defensive showing, and the Wimple sees nothing in the (admittedly scant) spring news to indicate this kind of upgrade is in progress. UNM’s schedule (confidently labeled "2011-2012") opens with a conference tilt in Albuquerque, against Colorado State, which would be an upset win. The Lobos’ non-conference games follow: a road trip to Arkansas, Texas Tech, Sam Houston State, and New Mexico State at home, and Nevada on the road after a bye. There have been no gimmes under Locksley, so a good start to 2011 would be to stay mostly healthy, beat Sam Houston State, New Mexico State, and to pull off one upset between CSU, Nevada, Arkansas, and Tech. 3-3 before the trip to Fort Worth would mark otherworldly improvement; 2-4 with a lot of injuries is a lot more likely.

Conference play resumes on the road against TCU; Air Force comes to New Mexico; the Lobos travel to San Diego State, and probably all of those will be losses. UNLV comes to Albuquerque in mid-November, in the Lobos’ first very winnable conference game. Road trips to Wyoming and Boise finish the schedule. Assuming wins against UNLV and Wyoming, the Wimple sees four winnable games on the schedule. That means two surprises will be required for a bowl bid; only one for Locksley to coach another year at University Stadium.