The Purple Wimple welcomes back Jake, now a recidivist guest contributor about BYU at the Wimple, to look ahead at BYU.

BYU’s last football season started off as a train wreck. After the loss at Utah State the Cougars were 1-4, their worst start in nearly 40 years.

However, the Cougars gained momentum as the schedule eased up, as quarterback Jake Heaps gained confidence in the pocket, and the defense solidified as Bronco Mendenhall seized the reins in mid-season. Returning 16 starters (9 offense, 7 defense) the normally terse Bronco Mendenhall stating said this spring, "I loved the way spring practice went." 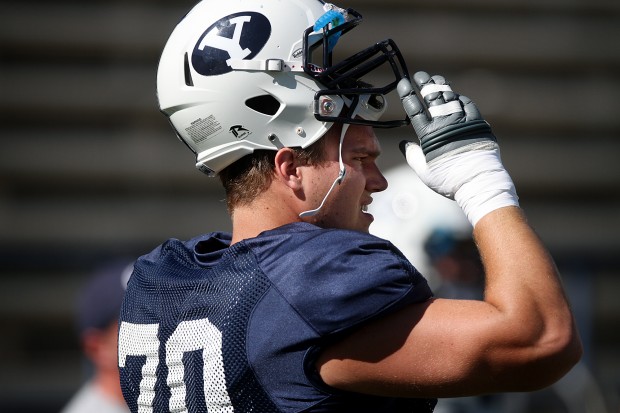 LT Matt Reynolds finally has a start in a spring game under his belt.

Certainly Mendenhall loved the fact that he had enough healthy linemen to hold a spring game. The past two years, BYU has cancelled its spring game partly for lack of enough healthy bodies on the offensive side of the trench. Also lovable was how little BYU had to work to determine who will start in 2011. Only Jason Speredon is gone from the starting o-line; Nick Alleto, a regular backup, also graduated. The star of the line is LT Matt Reynolds, a likely first-rounder after the '11 season. Junior Braden Hansen returns at left guard, senior Terence Brown at center. Look for junior Walter Kahaiali’i to start at right guard. Junior Braden Brown returns at right tackle. The four returning starters have fully 106 starts between them, making them one of the nation's most experienced starting fronts. Expect the line to go about nine deep with senior Marco Thorson, sophomore Houston Reynolds, junior Ryan Freeman, and sophomore and Manaaki Vaitai rotating in.

The beef need only plan to protect one starter in 2011. Mendenhall and newly anointed OC Brandon Doman, promoted from QB coach, made it clear that Heaps is the man in for 2011. They gave most of the first-team reps to Heaps this spring hoping to accelerate his development. Although Doman has stated that he intends to fashion his offense after the pass-happy system that put BYU on the map in the 1980s, don't be surprised to see Nelson (a 50% passer in '10, with 31 rushes for 148 yards) get a few direct snaps, given his propensity for making things happen with his legs. 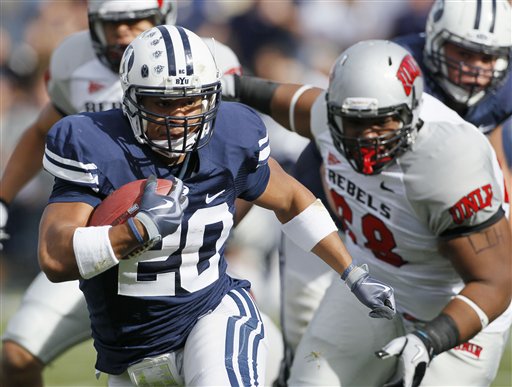 Fullback gains importance as the Cougars go under center more in 2011; the position will be manned by returning starter Zed Mendenhall and converted linebacker/recently returned missionary Michael Alisa.

At receiver, the future looks bright with Cody Hoffman and Ross Apo. Hoffman finished 2010 with 42 receptions, 527 receiving yards and seven TDs, including 137 yards and three TDs in the bowl. Apo redshirted last year, and was uncoverable in spring. Bruce Feldman named him a top 10 redshirt freshmen for 2011. McKay Jacobson slid further from the hype that accompanied his return from a mission prior to the '09 season, and moves to the slot this season. Maybe Hoffman’s and Apo’s ability to draw the safeties' attention will open the way for Jacobsen to shine again.

BYU did not emphasize the tight end role last season, having no experienced players to navigate in the wake of standouts Dennis Pitta and Andrew George. Five different tight ends played in 2010, and this spring the coaches thinned the herd by moving several to new positions. The remaining, most promising contributors are Devin Mahina and Richard Wilson to lead the way. 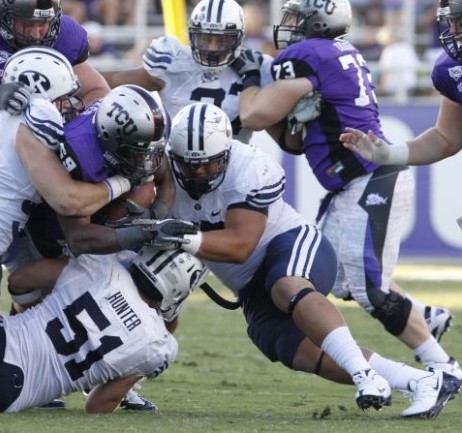 Eathyn Manumaleuna has solidified his role as a starting lineman.

BYU must replace All-MWC first-teamer Vic So’oto at defensive end. Tackles Romney Fuga and Jordan Richardson continue to recover from injuries that cut their 2010 seasons short. Fuga appears ready to go after a very impressive start to the 2010 season, and the Cougars got an infusion of new talent at the DT spot with the transfer of Hebron Fangupo from USC. Fangupo does not have to sit out the season due to USC’s sanctions. Fangupo impressed throughout the spring, and the Cougars’ ability to frequently rotate Fuga and Fangupo in BYU’s 3-4 base will anchor the Cougars' run defense. Redshirt freshman Travis Tuiloma participated in the 2-deep in the spring in Fuga’s absence and should also earn valuable playing time in 2011. Eathyn Manumaleuna returned from a church mission in 2010 and shifted from his pre-mission DT spot to DE, where he appeared to thrive in locking down a starting spot in the spring. He will likely be joined by Matt Putnam who started nine games at DE in 2010. Also in the mix is Graham Rowley, a redshirt sophomore.

Linebacker, both inside and outside, is BYU’s deepest and most talented position on either side of the ball. Outside, Kyle Van Noy returns after a solid freshman campaign, as does Jordan Pendleton, BYU’s resident wildman whose 2010 campaign was cut short due to a knee injury. Their combined speed and range are the best BYU has had at the position in recent memory. Pendleton’s health, however, remains a concern as he sat out 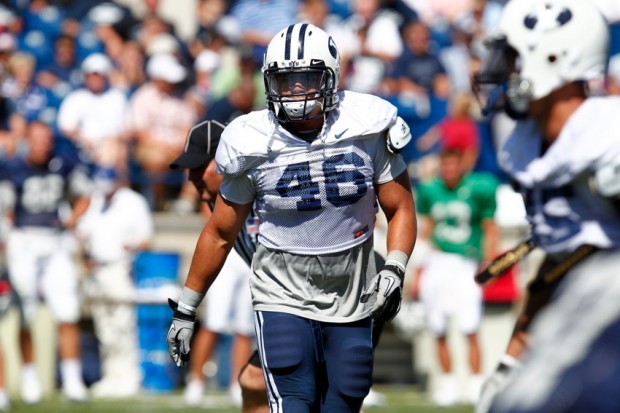 BYU's best weapon on the defense may be USC transfer Uona Kaveinga.

spring drills. In his place Jameson Frazier, a 2010 starter in his absence, continued to receive first-team reps this spring. In the middle, Uona Kaveinga, another USC transfer who sat out the 2010 season, locked down one of two 2011 starting spots in the spring and gained unprecedented praise from Bronco Mendenhall, calling him "currently THE leader on our defense." The other starting spot will likely be manned by Brandon Ogletree. Several other players, including Frazier, returned missionary Spencer Hadley and Zac Stout will rotate in frequently; the depth of the linebacking corps and Mendenhall’s willingness to go eight or even nine deep at the position throughout the course of a game will undoubtedly be the strength of BYU’s defense in 2011.

Probably no departing player from BYU’s 2010 squad will be missed more than strong safety Andrew Rich, who finished 2010 with 111 tackles and 5 interceptions as the other All-MWC first-teamer on BYU’s defense. His spot will likely be manned by a combination of returned missionary Daniel Sorenson, whom Bronco Mendenhall dubbed the "heir apparent" to the spot, and Mike Hague, a converted fullback and a terrific athlete who has lost nearly 50 pounds and significantly improved his conditioning in the offseason. Also departed from BYU’s 2010 defense are starting boundary (short side) corner Brandon Bradley, largely a run-stopper most famous for his fumbled interception that turned the tide in the Cougars’ loss to Utah, and starting field corner Brian Logan, who became a fan-favorite for playing much larger than his 5’6" stature. The leaders for the corner spots in 2011 are junior Robbie Buckner and senior Corby Eason, Bronco Mendenhall’s favorite corner blitzer in 2010. Redshirt freshman Jordan Johnson and JC transfers Preston Hadley and DeQuan Everett will also be in contention (Everett may also see time at a safety spot). Travis Uale, who finished 2010 as the starting free safety, should hold down that role in 2011, with Jray Galea’i also receiving playing time there. 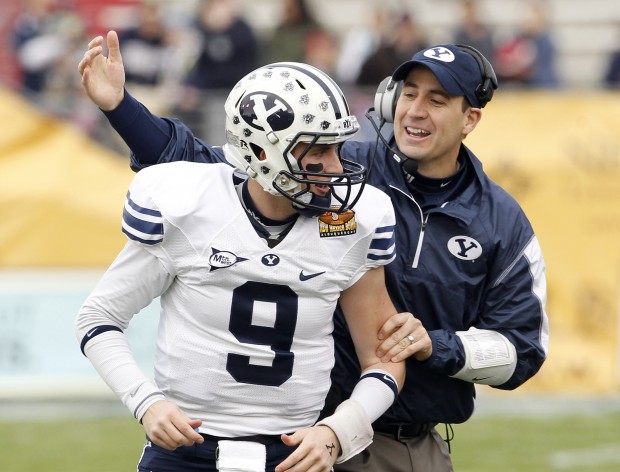 1. How will new OC Brandon Doman, entering his first season with coordinator duties, direct the Cougars’ offense? Departed OC Robert Anae was often criticized in 2010 for his conservative play-calling and refusal to let Jake Heaps loose early in the season. Doman has stated that he plans to move to more under-center formations for Heaps, using play action to open up the passing game and throw downfield early and often. Cougar fans expect that a Doman offense should provide for more fireworks, but Heaps is still a young gun, and wholesale offensive changes after his freshman year could prove challenging.

2. How will BYU replace the departed experience of Rich, Bradley and Logan in the defensive secondary? Mendenhall has stated that he feels this team is likely his deepest yet, and that includes the secondary, as Hadley, Johnson, Everett and Sorenson, among others, appear to be a step up in athleticism from prior years. But Rich, Bradley and Logan were all multi-year starters in the secondary--losing three of those in the same offseason is a tough pill to swallow, regardless of the quality of athletes looking to step in.

3. How will independence affect the team’s mindset? BYU will play its first season as a football independent in 2011, and many have wondered openly how an early-season loss may affect the team’s motivation down the stretch, given that there is no conference championship to play for if the team’s BCS hopes are dashed. This is a particularly acute concern where three of BYU’s toughest games--at Ole Miss, at Texas, and Utah--come in the first three weeks of the season. BYU needs to win at least two of these games in order to build momentum in advance of subsequent matchups against Oregon State and TCU.

4. How will BYU’s kicking game fare should they need a clutch field goal in a tight game? The Cougars must replace Mitch Payne, a reliable if unspectacular four-year starter at kicker. Justin Sorensen returns from an LDS mission to man the spot in 2011. Sorensen was touted as having one of the strongest legs in the country coming out of high school, but he was somewhat inconsistent in spring practices.

5. Can Jake Heaps continue his development from 2010 against stiffer competition? Heaps piled up his impressive late-season numbers last year largely against the likes of UNLV and Colorado State. BYU’s 2011 schedule has its share of weaklings, but the schedule is front-loaded with tough matchups which will challenge Heaps’ confidence and playmaking abilities. And Cougar fans don’t even dare to think of how quickly the promise of the 2011 season could evaporate if Heaps suffers any form of injury.

I consider the most likely losses on the Cougars’ schedule to be Texas (yes, the Longhorns are rebuilding from a tough 2010, but there’s plenty of raw talent in Austin and playing at Darrell Royal is never an easy proposition) and TCU (the Frogs lose a lot from 2010, but given the results of the past three years, I have to assume the Cougars won’t top the Frogs until they prove otherwise). The Cougars should have the talent to top Ole Miss (still in a rebuilding phase) and Utah (who barely slipped by a still-maturing BYU team last year), but both will be challenges, as will Oregon State, whom BYU bested in the '09 Las Vegas Bowl. Central Florida and Hawai’i (particularly given the Cougars’ recent track record on the islands) will both be sneakily tough. However, it’s hard for me to envision the Cougars dropping any of the other games on the schedule barring some unforeseen disaster (i.e., a serious injury to Heaps). The optimist in me says the Cougars go 10-2 with losses to Texas and TCU, and even those games are winnable if all the pieces come together quickly. However, the Cougars could easily slip to 7-5 given the challenges posed by Ole Miss, Utah and Oregon State.