This is the spring of Year Four of the June Jones revival on the Hilltop. Nobody questions that coach Jones has brought the Mustangs to a higher plateau, or that the Ponies are going to be bowl eligible most years. But, in a subtle tribute to Jones's success, that's no longer enough.

This team probably isn't going to contend for the non-cartel's autobid to a BCS bowl (emphasis on probably) but the Wimple believes it will show consistency on offense fit to match its aggressive style of defense. It will not take an upset for SMU to snag eight wins in the regular season. 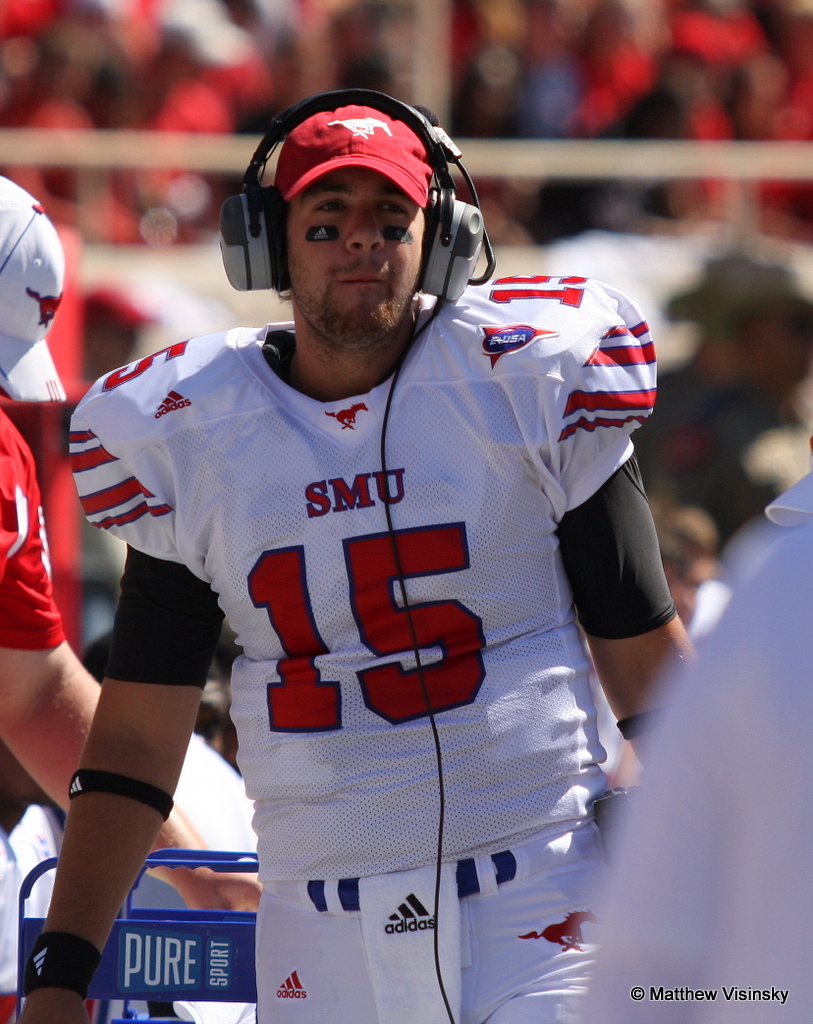 The unquestioned captain of SMU’s run-n-shoot is quarterback Kyle Padron. Playing his first full season as a sophomore, Padron’s QB rating dropped about 14% to 137.4. He was upright a lot more, though—taking just over two sacks per game, instead of the 3.14 sacks per game in his first year. Part of that improvement comes from better performance from his o-line and running game (138 yards per game in '10, up from 109 a year before); but another part comes from Padron getting rid of the ball faster. There’s no question this is Padron’s team in 2011. With so much experience in June Jones’s system, expect Padron to thrive as a junior.

Padron’s backup is J.J. McDermott, who sat out 2010 for his transfer penalty. McDermott was limited in the first half of spring drills, but looked good halfway through spring as he played more. He showed good accuracy on passes over the middle and downfield. McDermott really shone in late spring work on red zone offense, tallying a long streak of completions.

The new guy in the rotation is much-hyped Conner Preston, who early enrolled. He needs to learn to take some of the mustard off his throws, as many freshmen do early on.

For the first year since in June Jones's tenure, SMU is going to field an experienced line. There's not an underclassman on the first team line of Kelvin Beachum, Josh LeRibeus, Blake McJunkin (or possibly Bryce Tennison), Kelly Turner, and J.T. Brooks. They're not huge, averaging almost 6-3 and 305 pounds, but they've been together a few years now, and have learned to expect to win. With McJunkin at center they have 110 starts to their credit; with Tennison they have 118. They're also athletic— 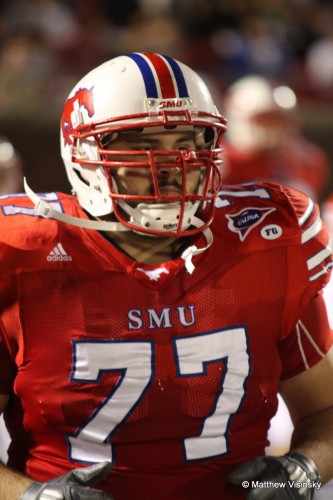 After a year off for grade recovery, Josh LeRibeus will be the star of the Mustang offensive line.

Kelvin Beachum moonlight on special teams a few times in the spring. The star of the line, Josh LeRibeus, has yet to start a game. The coaches pull him to left tackle, and even all the way over to right; he plays bigger than his 311 pounds.

Whom the line will be blocking for is a fortunate battle in which the incumbent, Zach Line, never participated fully in the spring. Line suffered a broken lumbar bone in his lower back late in the season, and played through the injury chalking up his discomfort to "normal soreness." He finally had a bone scan months after season’s end, which revealed the fracture. His doctors determined that simply resting — no more work than riding a stationary bike—would allow it to heal. Line's 1,494 rushing yards lapped the next leading rusher in the conference, but he's feeling pressure from Darryl Fields and Kevin Pope. Fields was the speed guy when he arrived a year ago, and Pope was supposed to be a power back. Fields is visibly stronger, and Pope spent several practices working at linebacker—all according to plan—but returned to the backfield, where his acceleration and ability to change direction quickly appear improved over last fall. 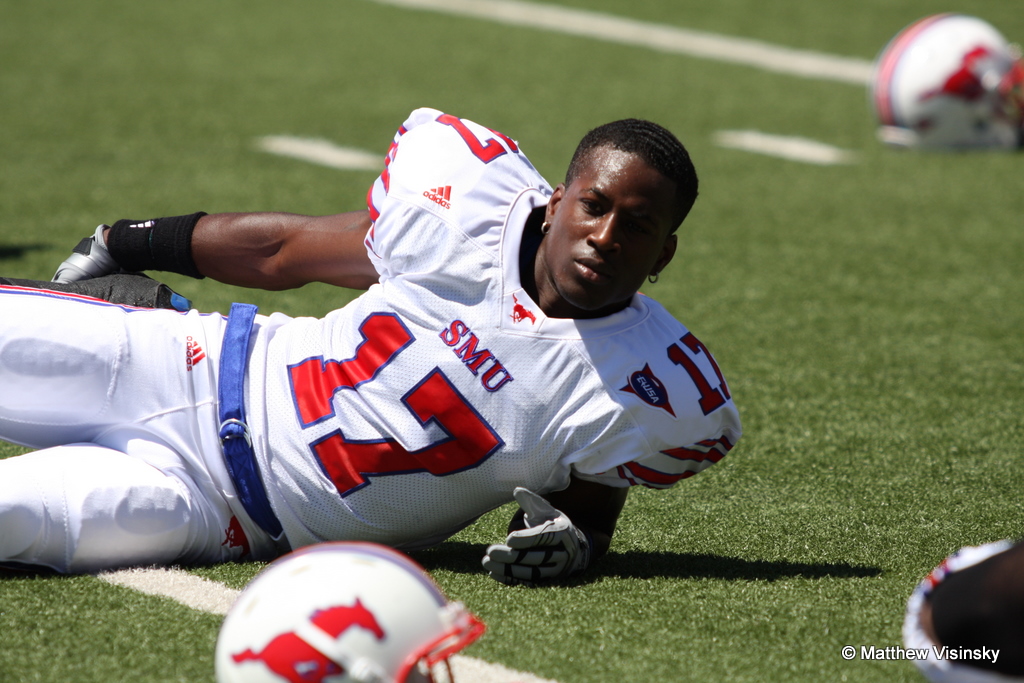 SMU looks like it is finally going to have a receiving corps worthy of its coach, scheme, and the rest of its team. The Mustangs return players who hauled in about 75% of their receptions last season, for about 65% of their receiving yards. A redshirt freshmen—Jeremy Johnson—appears the most likely to join the two leading returners—Cole Beasley and Darius Johnson (whom receivers coach Jeff Reinbold says is playing more consistently)—as a top threats in 2011. Reinbold was impressed by Johnson’s improvement. Like Darius Johnson, the young receiver has put in a lot of time with strength coach Mel de Laura and his staff. Also impressive in spring were redshirt freshmen Uchenna Nwabuike and Keenan Holman, who also appear to stronger after a year in the program. Holman has added about 10 pounds, and says he is practicing "faster" than he did in the fall is making difficult catches look routine. Nwabuike also has taken staps at linebacker.

Amusingly, June Jones had Cole Beasley take some snaps at defensive end, until guard Kelly Turner —121 heavier than Beasley— picked him up and carried him out of a play. "Those TCU defensive ends are pretty quick," Beasley said later. "I was trying to exaggerate that." They are fast, gents—and not too keen on bodily removal from the playing field. 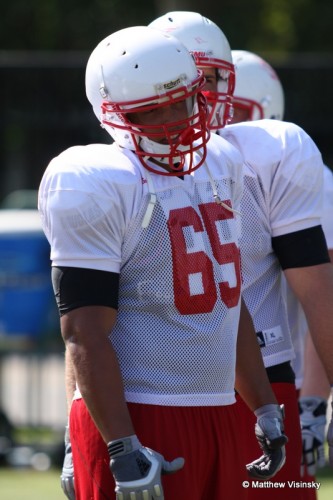 Jordan Favreau was the only starting D-lineman to play all of spring.

Across the neutral zone, SMU’s defensive line spent much of the spring in rehab. End Margus Hunt was very limited, recovering from offseason shoulder surgery. He reported feeling dizzy early in spring drills after running for the first time in seven weeks. The other end, Taylor Thompson, missed the second half of spring drills after tearing his labrum, prompting surgery to repair it. Both ends are expected to be fully healed in time for summer conditioning and preseason workouts in August. In their places, redshirt freshman Beau Barnes and Szymon Czerniak worked with the first team. Marquis Frazier moved to end from tackle, and Forrest Hagar moved to end from linebacker.

Inside, redshirt freshman backup Mike O'Guin suffered a significant knee injury during a full team drill, and was out for the spring. Jordan Favreau was the only starting lineman to make it all the way through spring.

The meat of SMU’s 3-4 defense is its linebacking corps. Fully 18 players practiced at linebacker this spring, including Kevin Pope, who returned to runningback before spring concluded. Defensive coordinator Tom Mason raved about Pope's ability to pick up the system in his first week with the SMU defense, saying "has a chance to be great." Staying in the new position are former safety Cody Worthen, running back Travis Carlile and receiver Jordan Miller. 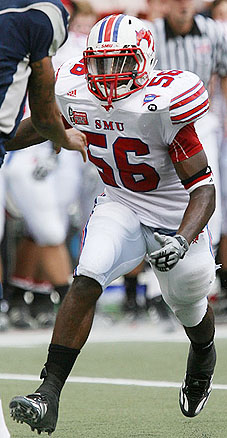 Three of the starting four seem set: Ja'Gared Davis who led the team in sacks and tackles-for-loss by a mile (but wants to get a lot more of them—18 to 20 in 2011, he says), and occasionally field punts, Taylor Reed and Cameron Rogers. Rogers piled interceptions in the spring. Davis, playing at 225 pounds, is watching more film than he ever did before, and is emerging as the leader of the defense. "‘JG’ has learned how to use his hands a lot better," said Kelvin Beachum, Jr., who sometimes has to block Davis in practice. "It used to be, he could run right by you. But now he can dip (a shoulder) and rip. He’s strong, too — stronger than he looks... One thing he does that you don’t see unless you’re looking for it is he twists his body away from you, so he’s almost coming at you sideways. He takes away the surface area that you see, and gives you less to get ahold of."

The story of the Mustangs's secondary seems to turn on the play of its corners. Senior JUCO transfer Richard Crawford returns as starter at one corner position. Last season, Crawford admits he was a little lost. Defensive coordinator Tom Mason said the transfer earned the starting job for his intelligence and his athletic ability. This spring he is giving some of his reps to younger teammates, a sign that the coaching staff believes the veteran players have a better grasp on things, from schemes to terminology to specific techniques. "Now that I’m more comfortable with the defense, I want to be more aggressive, I want to learn (receivers’) splits, learn their stems (groups of pass routes)," he says. 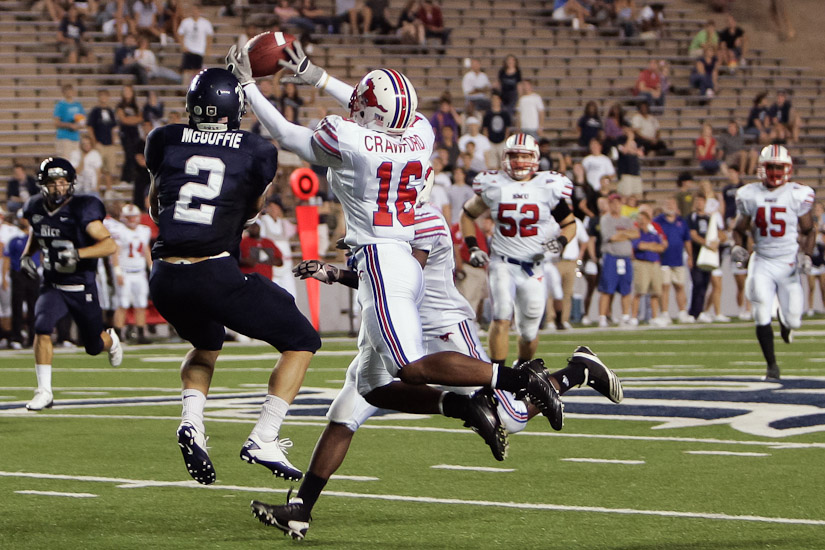 "[Last season], I wasn’t taking as many chances as I should have," he said. "What got me here was taking chances and making plays. When we were getting ready for the (Nov. 20) Marshall game (secondary) Coach Odum told me to relax. He told me, ‘just do what you do.’ That’s when my success really started."

This year, Crawford said he plans to be more aggressive and force opposing offenses to make a perfect play to beat him in 2011. "I need to force the play more — that’s what I did a lot of in the spring: pressing more. I’d rather make them throw over the top with a perfect throw. If I’m in a good position and use the right technique, I can still make plays if they go over the top. All of our corners can."

Crawford spends hours in the coaches’ offices, talking defense and watching film, and when other cornerbacks were on the field during spring workouts, he did mental reps. The time spent as an observer also allowed him to assess the progress being made by some of his teammates, including Keith Robinson, who ran with the first-team defense at the other cornerback spot, opposite Crawford, in spring workouts following the graduation of former starter Sterling Moore. "(Robinson) has really quick feet. He backpedals fast, and he comes out of his breaks really well, and for a guy who isn’t that tall [5-9 on the roster, so call it 5-8 in shoes] he really gets up well and battles for the ball at the highest possible spot." 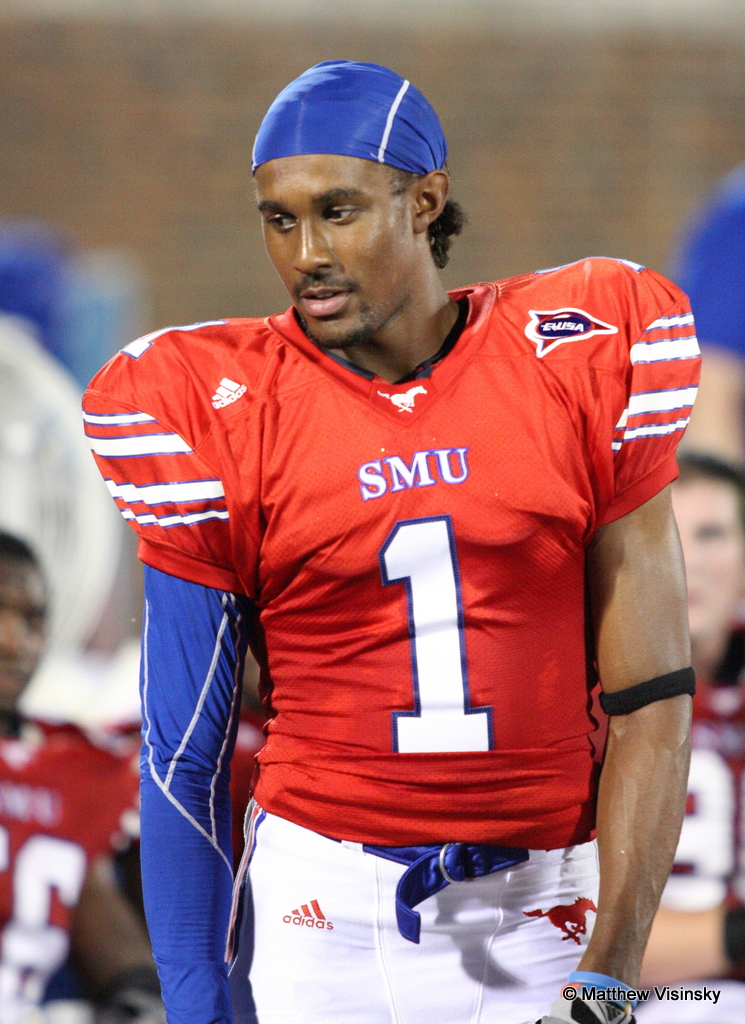 Fast-riser Chris Parks will debut at corner for SMU this year.

Keith Robinson and Chris Parks were sensational in spring drills, intercepting and breaking up passes from the first week. SMU has better depth at corner than it has had in years.

Both safety starters—Chris Banjo and Ryan Smith—return, as do both backups—Jay Scott and Justin Sorrell.

The 2011 schedule is distinctly three-part. It opens in College Station against the Aggies, followed by three must-wins, UTEP and Northwestern State in Dallas, and the conference-opener in Memphis. If SMU is worse than 3-1 leaving Memphis, something will have gone wrong.

The middle third of the schedule is brutal. The Mustangs travel to Fort Worth on a Friday to face TCU, followed by a week to recover before getting Central Florida at home, with trips to Southern Miss and Tulsa in mid-October. Only because just one of those games comes against a division-foe (Tulsa) does the tenor of the Mustangs' season not rest on a winning record in October.

Tulane and Navy come calling to start November, before the likely division-defining road trip to Houston. Rice concludes the regular season in Dallas.

If SMU can win its home game in October (UCF) and knock off either Tulsa or Houston on the road, it likely will win a second consecutive berth in the C-USA title game, likely another tilt against Central Florida. Another loss in that game, or another loss to TCU, will leave the team distinctly hungry. Winning the Iron Skillet or a berth in the Liberty Bowl would be new heights for June Jones's program, and a very satisfying launching point to 2012.