Nigel Burton, the new head coach of the Portland State Vikings last season, installed a balanced attack (with lots of running from the pistol) in the pace of a pass-happy run-n-shoot. Surprisingly, his inaugural campaign was pretty good on offense. But terrible on defense.

Cory McCaffrey and Willie Griffin combined for 140 rushing yards per game on average, McCaffrey gaining the lion's share. The passing attack was very average, not quite tipping 200 yards per game. Connor Kavanaugh and Tygue Howland shared quarterback duties, Howland in a sixth year of eligibility. Burton said a lack of depth, especially on defense, really hurt the team when a rash on injuring struck. "It was tough in that you would anticipate getting better as the year went on and all of a sudden the depth was being reshuffled," he said. "The system is what allowed us to be close in a lot of games but those games, however many of them there were, that came down to the wire, we didn't necessarily have a guy who stepped in the huddle and said throw me the ball or stepped in the huddle and said I hope they run it my way so I can end it," he said. 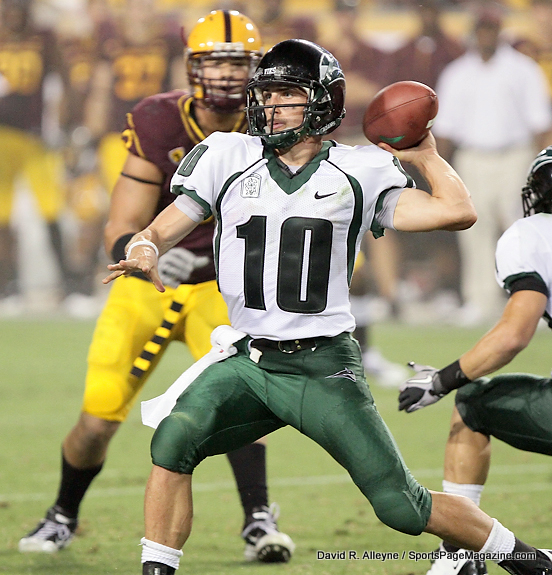 Connor Kavanaugh (unless Drew Hubel returns in strength this fall) will lead the Vikings' balanced offense again in 2011.

All told, the crew only managed 23 points per game, while giving up over 40. That 17-point disparity is to blame for the team's 2-9 record. Coach Burton hopes that increasing the level of competition in spring will help him improve that win total. His team's year learning together makes him optimistic that his 4-3 defense and pistol offense can succeed in the Big Sky Conference. "Everything was different," he said, comparing this year’s first day to last year’s. "Our guys know what to expect, they understand how practice flows, they understand the tempo, they understand the organized chaos and the pace we move whereas I think last year it was all form and pushing now, it's just going." Kavanaugh agreed: "(Last year) I don't think anybody knew each other," he said. "This year we know exactly what we have to do. We know the goals and guys are definitely excited."

With 21 starters, 49 letter winners and 19 redshirts returning, plus a handful of junior college signings slated to participate in spring practice, Burton is optimistic he has found the depth needed to right the ship. "I think there are several positions where we'll have a returning starter who probably won't start," he said. "There aren't any clear number ones," he said. "The only things you can pretty much bet on at this point are that (safety) DeShawn Shead will play somewhere, (running back) Cory McCaffrey will play and probably (offensive lineman) Dustin Waldron. Other than those three I think everyone is fighting for their job."

On incumbent starter who facing a serious challenge is senior quarterback Connor Kavanaugh. The senior was the more accurate passer last year, but lacks a secure hold on that spot. Kavanaugh became the starter when Drew Hubel, a three year starter, suffered a shoulder injury prior to the 2010 season. Nigel Burton did not consider Kavanaugh a starter this spring, saying he had "about a toenail up" on the competition. But Hubel was still limited in practice due to his shoulder surgery, and senior Justin Engstrom and redshirt freshman Josh Milhollin could not wrest the starting snaps away from Kavanaugh. So, going into fall, it appears Kavanaugh still has that toenail hold on the starting job. Engstrom ran the twos in the spring game, primarily the read option. Milhollin is more of a passer, but still is catching up to the speed of the college game. "Each one of [the young backups] has something they can add," he said. "Connor is still that field general. We know that Drew can sling it. The young guys, we got them more reps towards the end of spring, and they did a nice job." 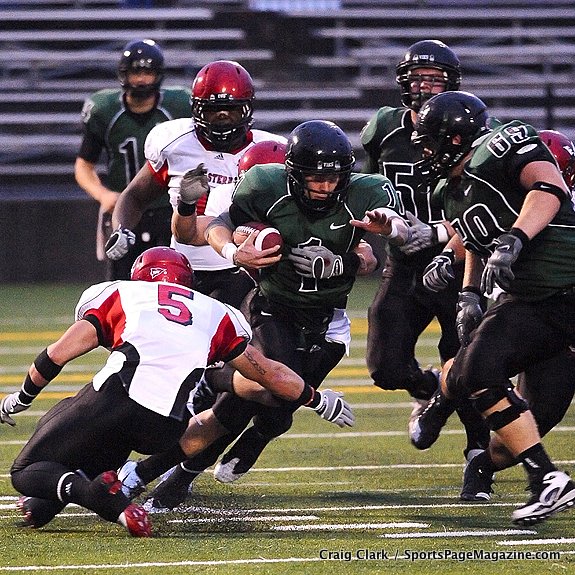 Blocking for Portland State's pistol attack will be five starters who all have a year's experience running the pistol. Senior LT Dustin Waldron, and junior LG Kyle Ritt have 45 starts between them. Of the new starters, C Adam Kleffner and RG Bruce Seumanutafa are upperclassmen, and are the line's big men. Kleffner is 6-3, 310 pounds, and Seumanutafa is 6-5, 350 pounds (down 50 pounds from last season!). Sophomore RT Mitchell Van Dyk is the only underclassman on the line, and he played in three games last season.

Backup LT Joey Esposito is recovering from a second bout of testicular cancer, and played at about 75 percent this spring. Offensive line coach Brad Davis says Esposito epitomizes everything he and his fellow coaches hope their team stands for. "You can't put a heart inside of somebody and make them tough," Davis said. "He had that. He learned it a long time ago. I didn't reach him that. He was a diamond in the rough for us."

The star of the team, Big Sky's first-team all-conference back Cory McCaffrey, is not a big back. At 5-9, 185 pounds, the senior had (as a junior) 231 carries for 1,287 yards and 10 touchdowns, including eight 100-yard games. Also as a junior, the change of pace back, Willie Griffin is even shorter (5-8) but stockier (195 pounds). The coaches kept McCaffrey from contact drills this spring.

The Vikings were not going to punish through the air last season, but hope to develop some punch this season with one steady returner, and several compelling new threats. Junior Justin Monahan, who rose to a starting position because of his work as a blocker when Burton was first installing his offense in early 2010, hauled in 30 passes for 369 yards and a pair of touchdowns last season. Now he's the senior statesman of the receiving corps this season. Tight Ends Kyle McMillin are Kalua Noa are upperclassmen, but Noa was a rarely-used receiver last season, and McMillin played mostly on special teams. A JUCO transfer, Gage Loftin from Snow College and freshman Roston Tatum bring talent to the corps. Intrigue (and height) come from the basketball team—in the person of tight end Tree Thomas, who had never played football before this spring. He's 6-8, and was not a disappointment in spring drills. 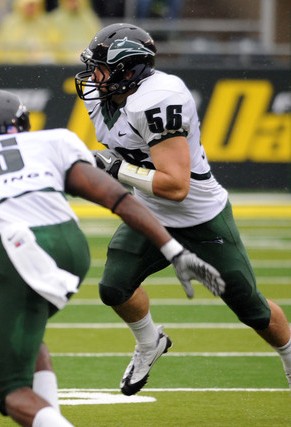 Any life at all in the defense would mark distinct improvement over 2010's dismal showing. Nigel Burton, whow as Nevada's defensive coordinator prior to assuming the top job at Portland State, says his crew has done more than just improve. "What I really appreciate is the way the defense stepped up," he said. "They're playing with pride, they're getting after it, they're tackling better, they're causing takeaways, they're doing the things that we're going to need to do in fall to compete for a championship as opposed to just having a winning season." In the spring game, the defense forced three-and-outs on half of the offense's possessions and forcing two turnovers. Granted, the D didn't need to stop Cory McCaffrey, but it did hold the offense to 2.5 yards per rush attempt. A slew of newcomers—either new this year, or emerging from redshirt seasons—are now on hand, hopefully to boost the team's performance.

Up front, coach Burton was particularly excited about the improvement he saw on his defensive line. The Vikings play a 4-3 defense, and three expected starters on the line have starting experience—LT Jack Forbes, a JUCO transfer, is the exception. LT Alika Vaiese, RT Julious Moore, and RE Carl Sommer return for 2011. Sommer is the star, racking up 45 tackles, 11 for losses, last season.

Nigel Burton expects his linebackers to be the key to the defense, particularly two JUCO transfers who redshirted last season, junior linebacker Ian Sluss and Dionte Brooks. "They've been outstanding in offseason workouts and I have a lot of expectations for them," he said. Sluss emerged as a leader in the spring, including tallying three tackles for loss in one drive of the spring game. Brooks and Sluss are presently listed as backups behind returning starters Ryan Rau and Shane Melbo. Joel Sisler and Khalil Bass are competing to start on the strong side. 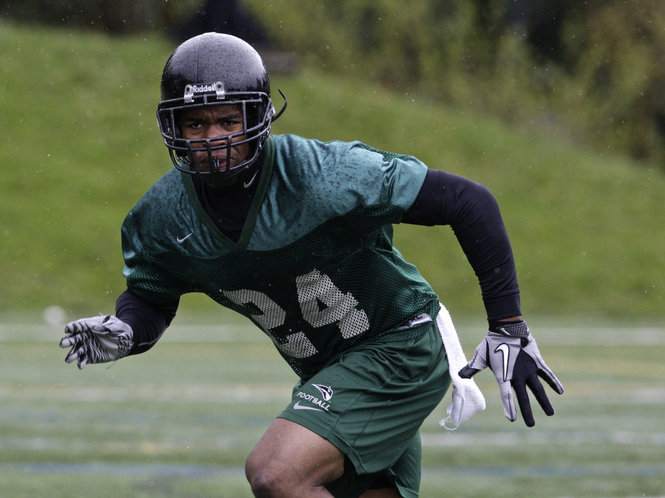 Nigel Burton is shaking up his secondary, looking for improvement. He's moved second team all-conference corner DeShawn Shead from corner to safety, and brought in JUCO transfer Aaron Kincy to challenge David Ross at the other corner spot. Manoa Latu returns at the second safety spot, and Michael Williams starts at the other corner.

One area where Portland State did not do poorly last season was kicking and punting. Kicker Zach Brown returns to pad his career lead at the school for field goals—presently at 36. Braedyn Eagle has been the Viking's only long snapper for three years, and returns for a fourth. The new player is punter Thomas Duyndam, from Australia.

The Vikings open 2011 against a D-2 team, Southern Oregon-- similar to a 1A team opening against a 2A team. After a bye, Portland State begins conference play at home against Northern Arizona, a middle-of-the-pack Big Sky team. PSU's first road trip is to Fort Worth the following week.