Aside from the obvious replacement issues that face the Frog offense at quarterback and wide receiver, perhaps the most pressing part of the present rebuild is on the offensive line. 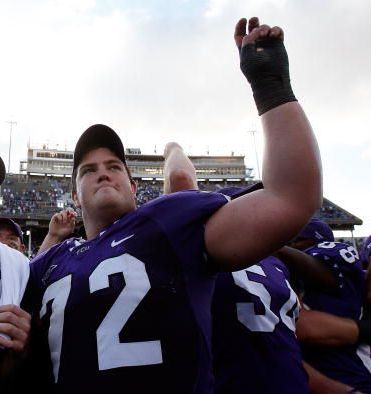 Left guard Kyle Dooley is the senior statesman on the line.

Right guard Blaize Foltz has played several years at the position, and even started a couple times, and looked great this spring. "Center is [still in flux] but the guards aren’t, we know Foltz and Dooley, we know where we are with all that," said Patterson. "He’s a 550 bench and we stopped him, that should let you know how strong he is and how he does things." John Wooldridge appears to be in the mix to back up Foltz, and career utility man Spencer Thompson is as solid a second-team guard as there is.

James Fry was Kirkpatrick's backup at center, and appears to have held off charges for starting snaps from Eric Tausch and Michael Thompson, although Thompson's challenge is, by all accounts, only going to get more impressive.

The real question—and perhaps the single more pressing issue remaining at the end of spring ball—is the left tackle position. After expressing satisfaction with his centers and guards, Coach Patterson says, "Our tackles right now for us to even be close to where we want to be next year we really have to improve there. "Number one we’re still not even close to where we need to be at offensive tackle... We have one older guy and the others have to grow up... We just moved Fabuluje up, somebody is going to have to play. Somebody is going to have to step up. As I said starting spring, the most important position not quarterback, are on our offense to get better and find players is offensive tackle. We’ve lost three or four offensive tackles to the NFL in the last two years... You’ve lost four guys that have played. Outside of Olsen, all the rest of those guys have got to grow up." 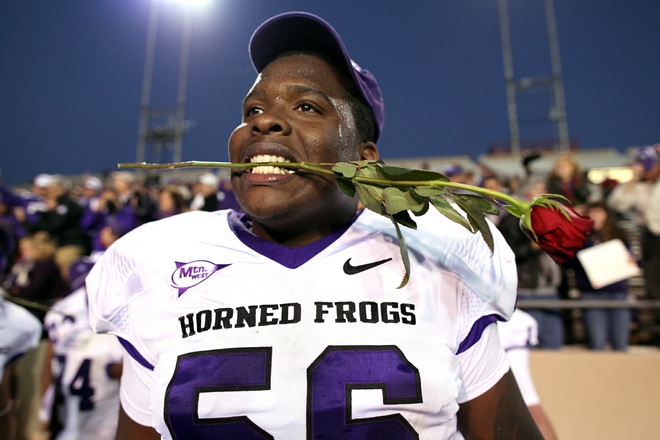 Left tackle James Dunbar did not have a rosy enough spring to win a starting spot in April. (Photo by Eric Draper/Getty Images)

James Dunbar backed up Marcus Cannon last year, as a redshirt freshman, but did not have an inspiring spring; unfortunately, neither did his competition, redshirt freshman Nykiren Wellington (who was injured near the end of spring drills, but is expected to return for August camp), and BYU transfer Tayo Fabuluje. The coaches rotated Jeff Olsen and Ty Horn through the position, as well, but to no avail, yet.

"They just keep rotating them, he’s just preparing them for next year. Right now we’re trying to make sure we can get through," Patterson said. "Tayo Fabuluje was over there too. Right now if I had to list two starters it would be Horn and Olson. To be honest with you we only have one starting tackle as far as I’m concerned and that’s Olson. Hopefully we find out by our first ball game who the other guy is."

Tayo Fabuluje is the biggest player on the field, measuring 6-foot-7, 317 pounds. TCU is hoping to get a waiver that allows him to play as a sophomore this fall. Transfers normally have to sit out a year. Fabuluje attended Arlington Oakridge before taking a scholarship to BYU. "I've seen a lot of guys who look good but not play worth a dang, so we'll see," Patterson said. Fabuluje spend a few practices at defensive tackle, but returned to the offensive line to left and right tackle.

So, given the left tackle position is a toss-up right now between Fabuluje, Dunbar, and Wellington, and that none of those players have ever started, what is known is this: LG Kyle Dooley, C James Fry, RG Blaize Foltz, and RT Jeff Olsen have 32 starts between them, 26 of them Dooley's. One program insider tells worry warts not to worry; these growing linemen are practicing into the fiercest pass rush in the nation, and that if they can manage in the season's first two games, they will thrive. "Trust in [offensive line coach] Eddie [Williamson]," he says. "He has been a miracle worker in the past, the best teaching o-line coach in America." 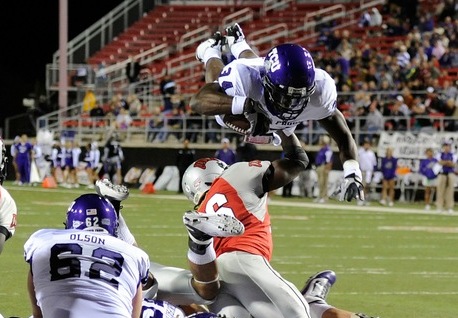 Starter Ed Wesley was limited in spring, but is expected to by flying at full strength in August. (Photo by Ethan Miller/Getty Images)

So the Frog offensive line ends spring 2011 in much the same position it ended spring 2010—on the lookout for a standout at tackle, but otherwise chugging along pretty well. Less experienced, sure; but not expected to be a weakness of the team, if the tackle position solidifies in August.

At backfield, the situation couldn't be rosier. Gary Patterson thinks he has the deepest corps of ballcarriers he's ever coached. "Obviously the depth all the way to Jercell Fort, it always helps you because everyone can get in the rotation and everybody stays healthier because you’re not taking as many reps. All of that helps your team because the key is to get them to the ball game."

The five players expect to get carries in 2011 are returning starter Ed Wesley (junior), backups Matthew Tucker (junior) and Waymon James (sophomore), utility backup Aundre Dean (junior) and phenom Dwight "The Myth" Smith (redshirt freshman). All took snaps behind the first team line this spring, and all had good runs this spring. 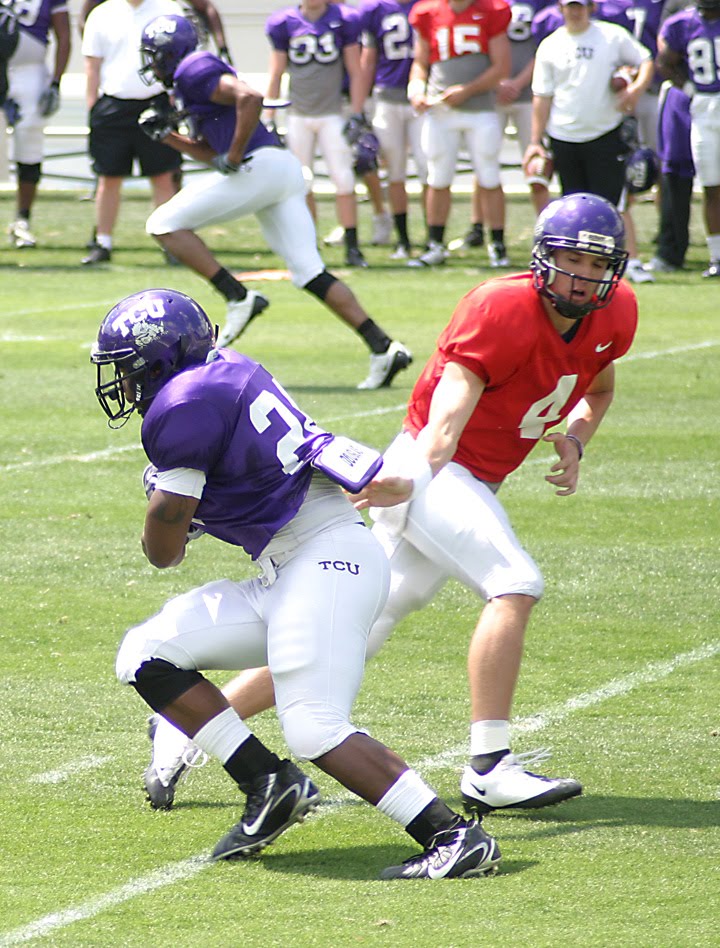 Is this the Frogs' winning combo for the future: Casey Pachall and Dwight Smith? (Photo: David May)

Dwight Smith and Aundre Dean shone between the tackles. Smith is great at making the first guy miss and can pick up the tough yardage between the tackles. He showed what everyone has talked about with how quick and agile he is for his size. Did I mention quick? Hardly a spring practice report lacked exclamations about Smith's speed, which, for his size (218 pounds) is remarkable. In the spring game he was jittery (his family said he was shaking with anticipation before the game, really his first snaps for a crowd in a full year) and disappointed some by dancing around more than plowing ahead. In his defense, he didn't have much room to run, and his two fumbles had as much to do with nerves as hard hitting. He showed his strength, and rekindled expectations that he will be a game changer once he gets on the gridiron. 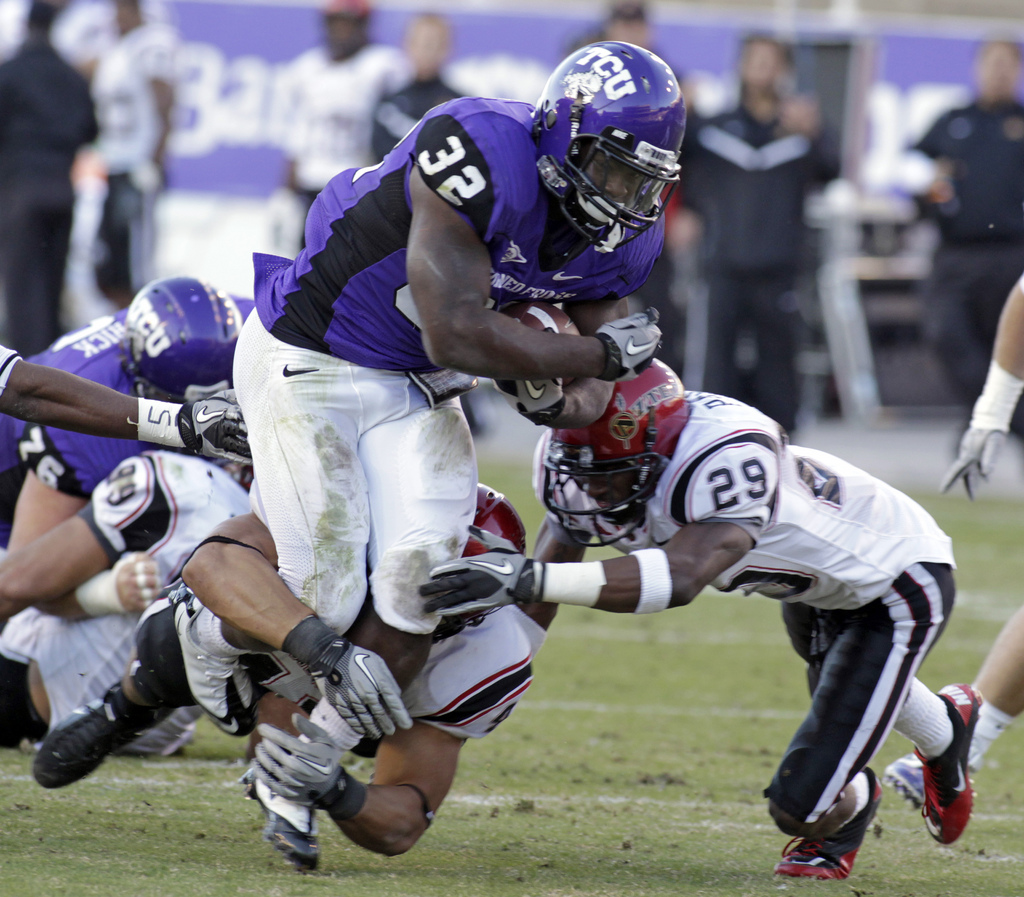 Waymon James remains the best pass catching back on the team. Ed Wesley was limited this spring, but is expected back at full strength in August.