A Tale of Two Programs

Share All sharing options for: A Tale of Two Programs 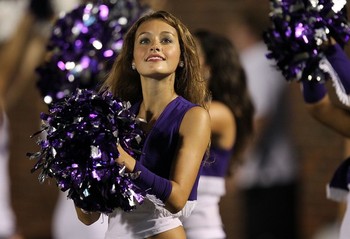 Well, TCU is on its farewell tour of the Mountain West Conference, and is poised to jump to what is currently a BCS conference. Perhaps with TCU's help, it will stay that way . . . that is, if West Virginia stays (I don't have any info that says they won't, except my own rank speculation that if the dominoes start falling, and superconferences get created, the SEC or ACC are likely to pick them up). Geographically, the Big East is not exactly a natural fit, and God help us in basketball, but nevertheless, TCU will finally have the "just win and you're in" path to BCS bowl games.

Things have never looked Rosier for the Frogs -- coming off a perfect season, a Rose Bowl crown, a new stadium, and recent accolades naming Patterson the best coach in college football. The press articles on TCU are finally discussing how TCU is merely "reloading," even after losing its QB and an awful lot of other strong contributors on both sides of the ball.

Is there still some disrespect? Sure. Boise State joins the MWC and suddenly, TCU is projected to finish second. While Boise State hogs all the press for BCS busting teams, TCU continues to merely dominate its opponents and, together with its brethren of perhaps this one year, serve as the poster child as the counter-argument against all those who still cling to the "lesser conferences can’t compete" theory.

TCU will represent "little guys" everywhere, again, in the season opener when TCU heads to Waco the opening week of the season to play the Baylor Bears. Baylor will attempt redemption after last year's abysmal showing in Ft. Worth. In 2010 TCU was dominant on both sides of the ball. Baylor, the perennial bottom dweller of the Big 12’s former southern division, could not compete. This year's game may be closer (it almost has to be), but no one who is not a Baylor alum is putting money on the Bears. Even with Griffin, there is more than an hour and a half stretch of interstate separating the programs.

There is some irony here . . . of which we are continually reminded by the seemingly continual conference realignment shenanigans. As every Texan knows, Baylor used its political weight to bar TCU's entry into the Big 12 at the time of the Southwest Conference break-up. Granted, TCU's record on the gridiron didn't do it any favors, but still. It is a wound that still runs deep, and TCU has been wandering in the wilderness ever since.

Baylor’s move no doubt was financially rewarding in the short term (and perhaps in perpetuity), but at what cost? Baylor doomed itself to play in a division of a conference that almost guaranteed they would remain an option for everyone’s homecoming.

Meanwhile, I’m sure there have been moments of sulking, but TCU has made the most of its situation, compiling the best record in NCAA football against BCS conference schools, and winning conference championships. It appears hell bent on doing more than that.

Where would Baylor be if it had given itself a legitimate chance to win some games in a lesser conference? This is the second summer in a row where we almost saw. Last summer, most viewed the PAC-10 grabbing Colorado as a preemptive move to foreclose Texas from insisting on bringing Baylor to the party. It worked, but perhaps it was also the poison pill to the entire deal. Baylor continued to insist on not being left out. It continued to use any political savvy it had to either: go wherever UT, A&M, and TTU went, or keep the Big 12 together. To their credit, they succeeded. They didn't count on A&M growing up and deciding they can live without being UT's little brother, however. If the detente is broken, Baylor could be left without a home in the very near future.

Thus far, Baylor has proven itself a survivor, but I have to ask, is Baylor too good for its own good? How good could Baylor have been it had the opportunity to compete against programs and universities its own size, even for a little while . . . thereby giving themselves a chance to establish a winning culture and a chance to grow? It’s highly speculative to say that Baylor could have been another TCU had it walked in TCU’s footsteps, but what if it had? Where would the program be now?

Where would TCU be if it had it's way back then and squeezed into the Big 12??? Could TCU compete in the Big 12 now? Absolutely, and now that it has had a chance to regrow, it could year in and year out. Will it be just fine in the Big East? I think it will establish itself as the elite in the conference. The question is, would TCU be as good as it is now, had it not had to wander for a decade and a half in non-BCS conferences? I wonder....

I can tell you this . . . I don’t care what BCS school you want to use as your example, no one schedules TCU for its homecoming . . . and no one will in the foreseeable future.