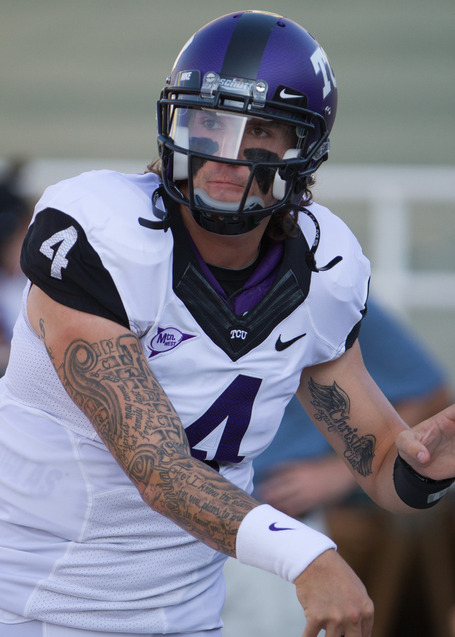 While usually a very difficult choice, picking the single standout on TCU's football team in 2011 is just not that hard. Pachall was widely regarded as entering his starting career clearly behind the line established by Andy Dalton, albeit with plenty of upside. But as has been noted elsewhere, the lanky tattoo enthusiast blew that narrative out of the water in Waco. Much is being made of Casey Pachall's breaking Andy Dalton's single-season records for completions (228, Dalton's record: 222 in '07) and yards (2,921, Dalton's record: 2,857 in '10). More important are Pachall's touchdown to interception ratio, which is a sterling 25:7, and yards-per-attempt, also sterling at 8.52. Dalton didn't best the TD:INT mark until this fourth year starting, and the yards-per-attempt until his third year (beating it by one-hundreth of a yard).

Pachall has far outperformed expectations, and not quite breaking all of Andy Dalton's best marks is not the measure of the tattoo-ed one's season. Rather, that he ran the offense efficiently-- sometimes brilliantly-- and made detractors look to the defense for discussion is evidence enough that passing of the baton from the Ginger Avenger entailed no slowdown at all for the Frogs. 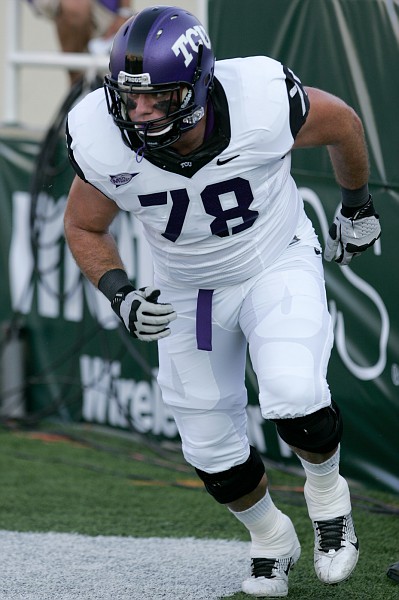 Robert Deck probably did not land a single post-season award in his entire football career at TCU. But the simple truth is, he may have saved the Horned Frogs' season in 2011. All he did was convert from tight end to right tackle and solve the most pressing problem on offense that TCU faced-- how to keep the quarterback upright after several key graduations off of 2010's line? Deck was the right man for the right job at the right time, and because he performed so well, all of our focus could be spent on how good the offense was in the first year A.D. (that's "After Dalton") and how bad the defense was (after Tejay Johnson's departure, but "ATJ" doesn't make as catchy an acronym). 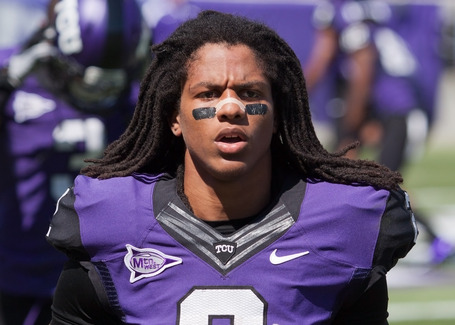 This JUCO transfer brought his gnarly dreds to TCU and, after a tough introduction to the Heisman in Waco, became TCU's best cornerback. That might not be saying just a whole lot, but Verrett's improvement and resilience in 2011 bodes very well for 2012. And his dreds are epic. 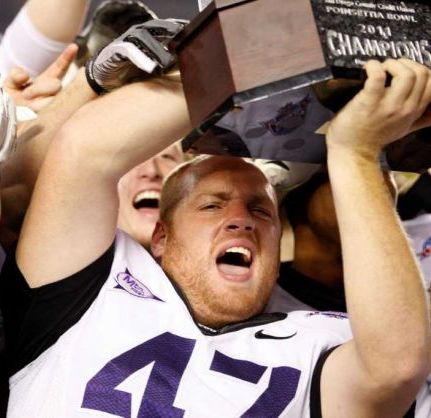 No, Kelton's yards-per-punt isn't going to put fear into his replacement. And, sadly, we never got to see the 280 pound punter knock a return-man into next week. But we also never saw a long snap get away-- not this year, and not last year, and not any year recently, that I can recall. Anson Kelton took punting off of TCU's worry list for four years. (And he avoided burglary-- however justified-- at the end of his career, ahem!)

Senior of the Year: Greg McCoy 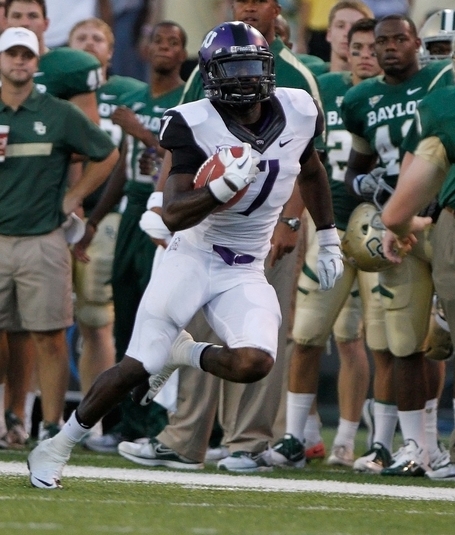 What can't we say about Greg McCoy? He's maddening-- sometimes playing so very forgettably. And then sometimes he's simply phenomenal. His kick returns in Waco kept the Frogs in the game; his man coverage kept them out of it! He was always fun to watch, but he leads the least-remarkable senior class to graduate TCU in several years. That class-- so unremarkable-- won more games than any other to wear purple and white.

Junior of the Year: Kenny Cain 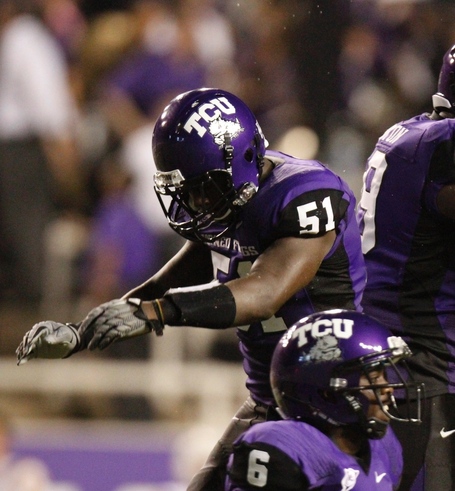 Kenny Cain reminds me of Robert Henson. He won't be scheduled to start a full season until his senior year; but he is such a playmaker! When Tanner Brock went down in the first quarter of the opener, Cain (who had been making waves all off-season as a force with which to reckon) stepped in, and stepped up. He inherits Kris Gardner's emotional leadership of the defense, and is on the short list for defensive players of the year next year. 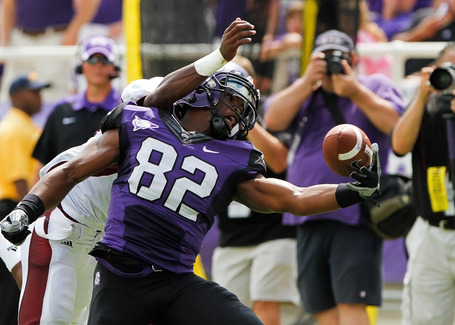 Boyce is the second of TCU's terrific trio of sophomores-- Pachall and James (see below) are the others. These three are simple stupendous. Do you need an improbable third down converted? A long touchdown? A jaw-dropping catch? A short route? A long one? Inside? Outside? This kid does it all, and so very well. Boyce will be one of the Big 12's best receivers in 2012. 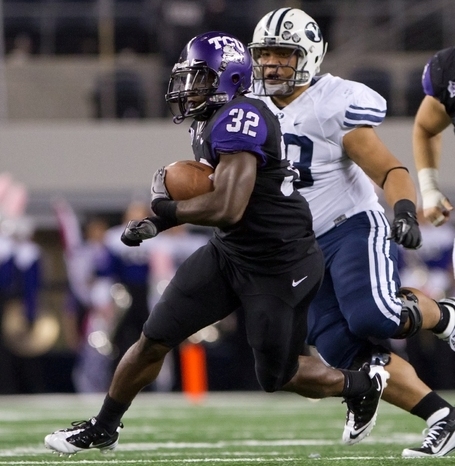 Also on the Big 12's best in 2012 will be Waymon James, at runningback. James gets hard yards, the inside ones that require a slippery back who is strong enough to shake off tackles, and fast enough eat green in big chunks. It's almost a shame he has to share carries with two other very good backs-- but fresh legs are part of the magic.

Freshman of the Year: Brandon Carter 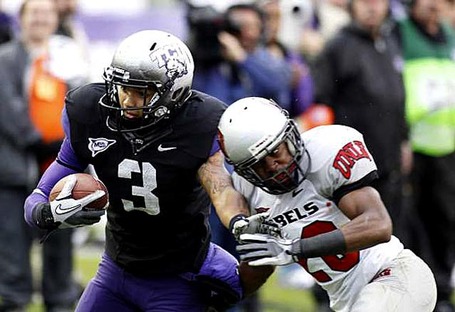 Perhaps the single most memorable moment of 2011 is Carter's ultimately athletic touchdown in the fourth quarter in Boize; that he has three more years to dazzle Frog fans (and worry the Frogs' opponents) is too good to be true.

Can't Wait to See Next Year: Trevone Boykin (and Nykiren Wellington, LaDarius Brown, Chris Hackett, Tanner Brock, and Quincy Aldridge; but really I can't wait to see the QB battle Matt Brown for the backup spot, and begin to show the world why he was the best quarterback recruit in Texas last year.)