Frogs O' War watches the tape from Tech/West Virginia to see what to expect from the Red Raiders on Saturday.

Welcome to the Frogs O' War video rewind, where when we finally have a game that I would love to watch over and over again I can't get the tape anywhere. As a result we'll instead be looking at our nemesis of the week, the Texas Tech Red Raiders, in their extremely impressive beatdown of the formerly #5 West Virginia Mountaineers. As always we'll go through some of the key plays, good and bad, and hope to get a better idea of what to expect from Tech when they head to Fort Worth on Saturday. Sound good? Well we're doing it anyway.

What went right for Tech #1: Teach me how to Doege

The key for how Texas Tech plays is in how their senior quarterback, Seth Doege, plays. Doege had an excellent and efficient game against West Virginia, throwing one pick (that wasn't his fault) and one that didn't show up on the stat sheet because West Virginia lined up offside compared with 6 TDs. Here Tech lines up in the shotgun with four wide, two on each side and a running back to Doege's right. West Virginia is in a 3-4 with one OLB down on the line without a hand down and will play zone behind them. 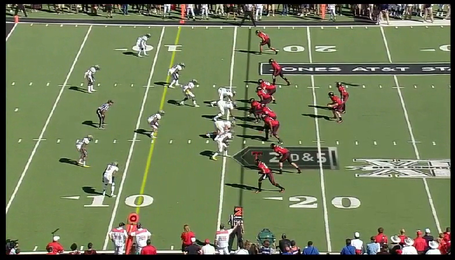 West Virignia's corners are playing well off of the line and as a result Tech's receivers are able to get up to full speed without issue. The linebacker who was on the line has dropped into the flat instead of rushing, meaning West Virginia is only sending three. As a result the pocket is clean. 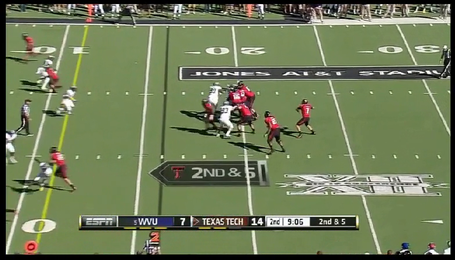 Doege has plenty of time, and the West Virginia cornerback on the near side didn't turn to run with the Tech receiver. Doege correctly identifies this and knows that if he throws the ball to the back of the end zone, his man will be there. This is why the #1 rule of zone coverage is that when you're playing deep don't let a man get behind you. 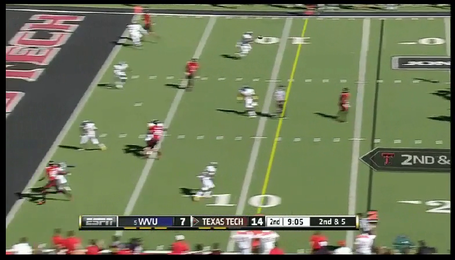 As a result of the corner being late to turn, receiver Marcus Kennard is able to run right by him and catch the ball without any interference. This is about as close to all alone as you get in the red zone. 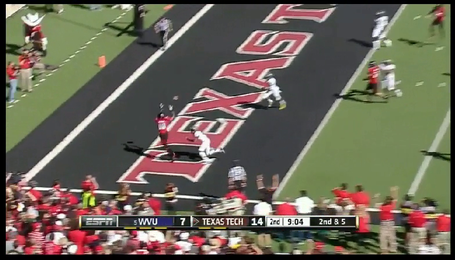 This was a fairly simple throw, but a good read of the corner by Doege. TCU will run a great deal of zone on Saturday, so when we play off the ball Patterson and company will be sure to drill it into the secondary's heads that if a man gets behind you, Doege will deliver.

What went wrong for Tech #1: The middle.

West Virginia didn't bring a whole lot of heat in this game, playing a lot of max cover zone to try and slow down Doege's passing. The problem they encountered was even in max cover they weren't able to stick with the Tech receivers. They would likely have been better served to bring pressure and try to bring the issue to Doege early, as the Tech line had issues, particularly inside. Tech is in the pistol with two receivers spread out on each side, while West Virginia is still in the 3-4 and will again only rush three. 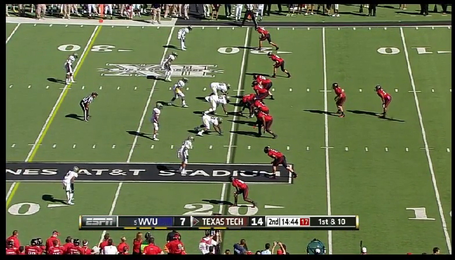 Doege looks downfield, but his first read on the outside is covered decently. Tech's left guard (#72) is already losing his man, however. When you can see that much of a guards number on the quarterback's blind side there's trouble. All of this has happened in the space of about a second. 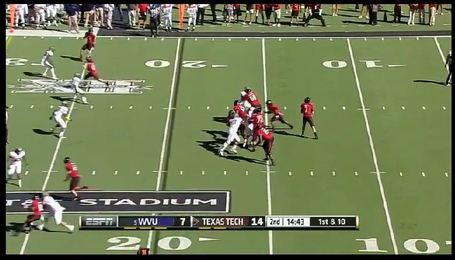 Doege looks to his second read, the inside receiver but is wrapped up before he can even think about throwing it away. West Virginia rushed three, but one sacked Doege and another looked like he would have had the play gone another second. That's two seconds for those counting. 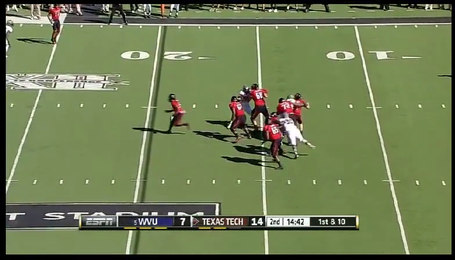 What does this mean for TCU? Expect the Frogs to supplement their general pressure on the inside by sending Kenny Cain up the middle often against Tech. This possible weakness in the middle will be exacerbated by Tech's starting center Deveric Gallington sitting out the first part of the game after getting tabbed with a drunk and disorderly charge after Tech's upset of West Virginia (For any Frog fans who might think about it, don't try to give Tech fans a hard time over this: Substance abuse is not something we can probably ever throw stones about again) which means that Tech will be starting a true freshman at center for the early part of the game. If the frogs bring a variety of pressure up the middle this could lead to bad snaps and possibly turnovers, so expect Patterson to bring heat up the middle early to see how the freshman responds.

What went right for Tech #2: Not the Pirate's Tech team.

Tech will still be living in the Shotgun/Pistol all night with at least three receivers, but the biggest difference from when Tech last visited Fort Worth will be in the running game. Tuberville is a coach who made his bones in the SEC and whose best season at Auburn was highlighted by two first round draft picks at running back. This is a coach who knows when to run the football even in a throwing offense, so expect actual runs on Saturday to go along with the typical swing passes and bubble screens to receivers. In this play Tech is in the shotgun and has two receivers on each side once again, with the running back lined up to Doege's left. There are 45 seconds left and fifty three yards to go, so West Virginia is thinking pass sitting back in their 3-4 but with the safeties back deep. 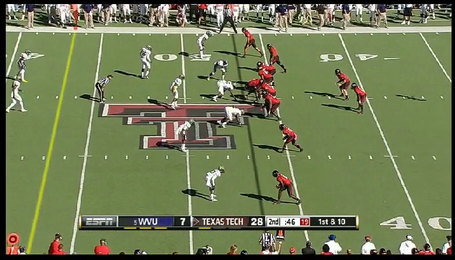 West Virginia is rushing three once again and as a result Tech has numbers at the point of attack. Doege makes the handoff to SaDale Foster and the right guard has pulled into the hole on the left to clean up the unengaged linebacker straight ahead. 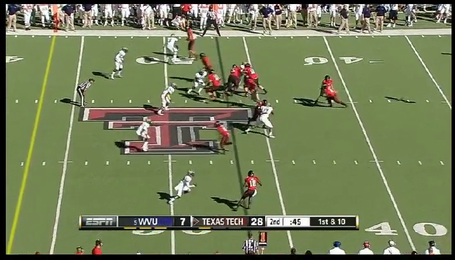 With the linebacker now snugly in the arms of the Tech right guard, Foster has a chance to make this into a huge play as Tech blocks solidly downfield. 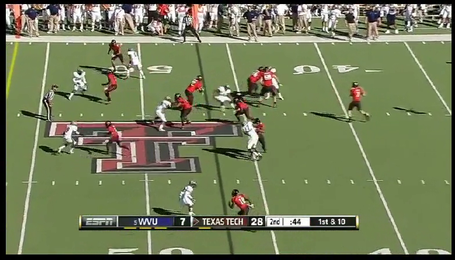 Foster probably has the momentum to pick up the first down going straight up the middle, but Tyson Williams (#3) for Tech has done a masterful job finishing his block and is in the safety's way. Foster sees it and takes a good angle to get to the outside 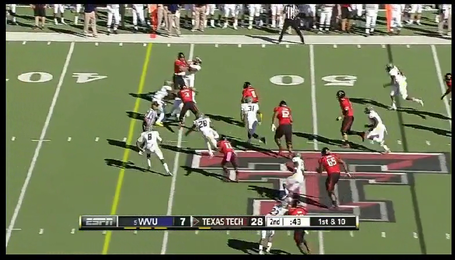 The West Virginia pursuit is slipping as Foster turns upfield at the sideline, and as a result he's able to turn on the jets and head straight up the sideline for a touchdown. 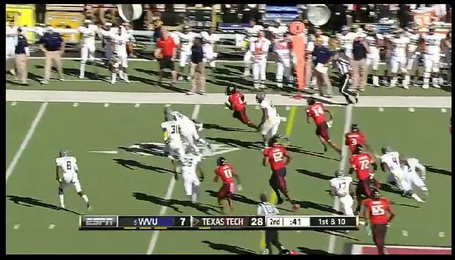 Tech will look to set up the run with their quick passing game, which means it will be critical for the frog defensive line not to lose contain. Losing contain is what gave the Jayhawks almost all of their success on the ground a few weeks past, so this will be a good opportunity to see how much our young DT pair has matured.

What went wrong for Tech #2: Visions of Boykin to come

A caveat: This most certainly did not go wrong for Tech against West Virginia. Tech did absolutely everything it wanted to accomplish on defense, giving up short yardage throws and making sure tackles on the catch. Geno Smith respondedby playing a bit like Reggie McNeal in 2005 in this game, which I'll certainly have to explain. In 2005, Texas A&M quarterback Reggie McNeal had the nation's longest active streak of attempts without an interception and... it went to his head. He stopped being willing to take the risks that are necessary when you play the quarterback position and it just hung over his head until he finally threw a pick and the weight came off. Smith seemed in that same boat, as many of his deep throws could have been successful if they were thrown a bit tighter. This play is illustrative of what Boykin will do in two ways, so despite it being another failure for the West Virginia offense it bears study. West Virginia lines up in the pistol with three receivers to Smith's left and one to the right. Tech is in a 4-3, but the linebackers are shifted toward the three receivers on the left. 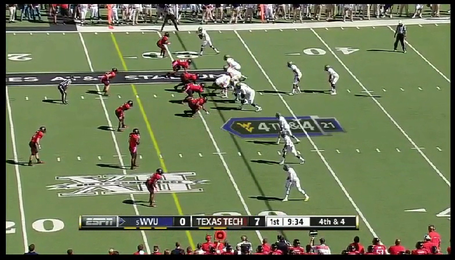 Tech rushes four and the West Virginia line holds up well as the receivers break into their routes. Tech's coverage is tight on the left side though, and Smith holds onto the ball, but doesn't check the backside receiver who will have separation. 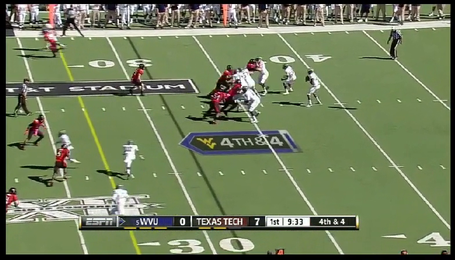 Pressure finally comes to Smith and he rolls out, keeping his eyes downfield on those three receivers that are still covered. What he doesn't appear to see is that to keep those receivers covered the entire left side of the field is open. If he tucks and runs he picks up the first down with little effort and probably not even a hit. 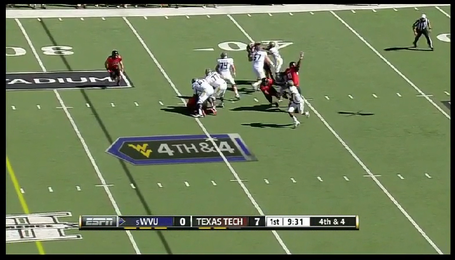 Finally Smith throws the pass, but look at how much open running room there was under where the ball is passing. This is the kind of thing that caused Dana Holgorsen to pull out the hair on top of his head. 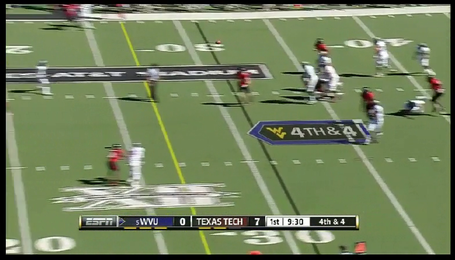 The pass is too high for Smith's intended receiver and lands harmlessly on the ground, but the first down was there for the taking, which would have given West Virginia another four downs to keep from falling behind by two touchdowns early. If West Virginia had immediately tied up the game after Tech's first score the game could have been very different. Tech would probably have still won, but it wouldn't have been as much of a butt kicking as it ended up being.

What does this mean for TCU? TCU will spread the field in much the same way that West Virginia did, and with TCU's receivers being at least as dangerous as West Virginia's, when the coverage is good Boykin will have to do what Smith did not- tuck and run. Fortunately for the frogs, Boykin is a much more confident runner than Smith (perhaps too confident) and will not hesitate to pick up the first downs that are available to him. If Boykin can be efficient running the ball the Frogs chances to win this game will dramatically improve.

That's it for the rewind this week as much of Tech's offensive highlight package won't have a lot of bearing on the TCU game for the simple reason that West Virginia's secondary is a tire fire (or at least a couch fire) and TCU's is not. Additionally Tech's man of the match, Tight end Jace Amaro, is unlikely to play in the TCU game this week- which is fortunate considering what Iowa State's excellent tight end did to us the last time out at Amon Carter. Happy friday frog fans and have a great time at the game tomorrow, it should be a great one.