Coming off an up and down 2012 season which ended against UCLA in the Super Regional Round of the NCAA Tournament, TCU looks primed and ready to take a big step forward in 2013. However, many questions remain following the end of fall practice.

You would have to be a fool to not look at 2012 and say, "Wow, how did we survive that season." At times, things looked so desperate just about everyone was willing to give up hope and move on. And then, a late season run took the Frogs through the regional vs. Texas A&M and into UCLA in the Super, a magical two week run that saw the Frogs seemingly grow up before our eyes.

The magic ended there, though, and the Frogs headed into the offseason knowing their would be many questions facing them in 2013. Many Frogs are gone, lost to the graduation and dreams of a future professional career. Many remain, and a cast of new faces has joined them to battle it out in a new conference, the formidable Big 12.

With fall practices having wrapped up with a scrimmage on Sunday, it is time to pull back the curtain of TCU Baseball 2012-2013 and take a first look at just what this team will bring next year. First up, a look at the new guys (freshmen and transfer) who will take the field next spring.

- The fences are moving in! 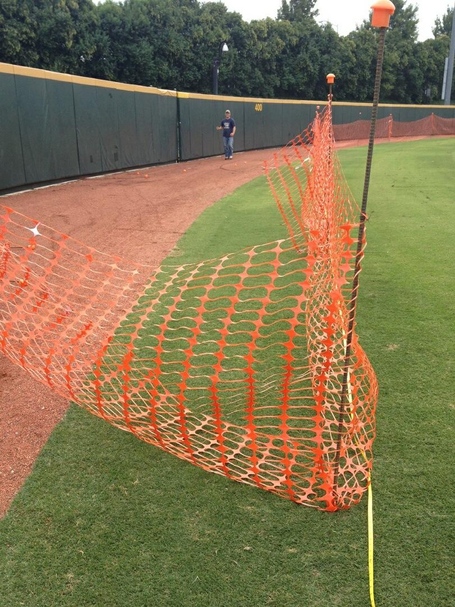 The final distance was TBD when I checked awhile back, but it will be a significant change no doubt.

- Other renovations and changes are also expected (although not all right now), including a revamped locker room, meeting rooms, addition of an outfield sitting area to replace the right field hill and a reconfiguration/expansion of both bullpens and batting cages.

- The Frogs have a new pitching coach! After Randy Mazey left for WVU, Jim Schlossnagle brought in Cal-State coach Kirk Saarloos to take over, and he has already made a significant impact with the staff and on the recruiting trail.

- Seven are pitchers (2 LHP/5 RHP) and nine are position players (Two IF, Three C, Five OF [Guys are playing in multiple spots]).

- The total roster, as I have it right now, sits at 36. The full roster should be available soon on GoFrogs.com.

- Riley Ferrell and Alex Young have really emerged as major factors on the mound for the 2013 team, both showing fantastic stuff and an advanced feel for the game. Ferrell MIGHT just be the next great arm to roll through TCU, showing plus, plus stuff with an advanced presence and feel for the game. Alex Young is extremely strong from the left side and can also flash nice radar gun readings, but was slowed some in the fall due to a minor injury. Mitchell Traver, who isn't expected back in 2013 after TJ Surgery earlier this fall, could also be a major addition to this staff in 2014... He had been projected as a top draft pick before injury in the spring, often flashing a plus fastball and breaking ball to go with a very advanced and projectable body.

- Tejay Antone has really turned heads this fall, very strong sinking fastball 88-91 who will likely be called on frequently in 2013. Future starter or closer? (Who knows) Brian Trieglaff and Garrett Grim both have been working through some minor injuries so it is hard to say what we have there, but both were highly touted coming out of high school with Trieglaff drawing a lot of attention in Houston with an (at times) strong fastball and secondary offerings.

- Trevor Seidenberger is going to play a big role in 2013, that much is clear. The lefty JUCO transfer isn't going to light up the radar guns but his solid repertoire is good enough to get a lot of outs at this level, and he is pretty much addicted to throwing strikes.

- Paddy O'Brien came into the fold following the dismissal of several athletes from the 2012 team, including catcher Braden Mattson. He has a plus arm (clocked in low-to-mid 90s in HS) and is a very good blocker behind the plate.

- Colton Turner is a plus athlete that could play at a number of spots for TCU in the future, as could Boomer White who might be another option at catcher or left field (or DH, for that matter). Both have shown early ability with the stick.

- Cody Jones is incredibly fast with an advanced eye at the plate, your stereotypical plate setter at the top of the order for the Frogs, expect him to man CF everyday barring injury.

- Kyle Bacak is your probable starting catcher, he didn't get to play much in the fall due to a minor injury but is expected to be fine in the spring. He came to the Frogs as a top defensive catcher at the JUCO level and should pick up the mantle left to him by Holaday and Elander, although it would be unfair to hold him to that standard just yet.

- Kevin Daniels and Dylan Fitzgerald are both JUCO OF'ers who could factor into either corner spot this fall... Neither flashes tremendous power potential but both are adequate defensively at the COF position.

- Paul Hendrix is a highly touted and sought after MIF who, assuming he can make the everyday play, will be your starting shortstop in 2013. Despite the question about his defense on routine plays, his bat is not at all in question and the Frogs are going to find a way to get him into the lineup next year.

- Mitchell Traver had TJ surgery, out until fall 2013 at the earliest.

- Alex Young had a minor injury, will be throwing through Christmas to be ready for the spring.

- Boomer White had a minor injury that limited his participation, should be cleared soon and be ready for the spring.

- Derek Odell had a minor injury that limited his participation, won't effect him playing come spring.

- Kyle Bacak had a minor injury that limited his participation, should be cleared soon and be ready for the spring.

- Garrett Grim has been working through some minor injuries all fall and has yet to practice much, he hopes to be back soon!

- Brian Trieglaff has been working through some minor injuries all fall and has yet to practice much, he hopes to be back soon!

FALL BALL QUESTIONS THAT NEEDED TO BE ANSWERED

Q: With Josh Elander gone, what will the options be at Catcher?

- Truly, there are many, and they likely all start with Kyle Bacak. If he is fully healthy come springtime, he will likely get the nod over Jerrick Suiter and Paddy O'Brien. If it isn't Kyle, Paddy O'Brien is the better defensive catcher while Jerrick Suiter can hold his own (including a + pop and arm). All three could play this spring, although I expect Bacak to get a lot of the early starts until injury, cold bat, ect. get in the way. Either way, it is entirely possible if not likely that these guys could all see time in 2013, meaning the days of having one "rock" of a catcher are over.

Q: Who will take over in the outfield for departed multi-year starters Coats, VT, Rivera?

- Cody Jones is penciled in as your everyday CF'er and leadoff hitter, the guy is incredibly fast, a better defender than VT and should be able to produce the same kind of strong OBP that you want to see from your leadoff hitter (not to mention, more speed and instinctiveness on the basepaths). Brett Johnson is probably your starting LF, although he could also play in right. Part of his mission was to prove he could play in left this offseason, and with the shorter fence I expect his range will be adequate there with a plus arm to boot. Right field could be as simple as Jerrick Suiter, but having him there is the "nothing goes wrong situation." Assuming something goes wrong (which it always does) and Suiter has to catch, a whole host of bodies could see time in RF including Dylan Fitzgerald and Kevin Daniels.

- This is likely an ongoing question, one that was not totally answered this fall. Keaton Jones proved two things in 2012: He can make every play at short including the easy ones, and his bat likely isn't going to provide much. So, in comes Paul Hendrix, a very solid MIF that has a plus bat and definitely has dynamic talent defensively at the position, but can he make the easy play? Can he make the simple throw every time (are you having flashbacks yet??? LOOKOUT VISITING TEAM DUGOUT!!!)? If he can, the job is likely his to lose. If he can't, Keaton Jones will likely retain the spot and Hendrix will have to be fit into the lineup elsewhere, possibly in RF or second base (with Odell playing at first or in the OF). There are any number of possibilities for this contingency, let's just hope Paul can lock it down. If he can, the Frogs will take a big step forward in 2013 towards postseason possibilities.

Q: Can Andrew Mitchell be this teams lock down closer?

- The answer coming out of the fall is unequivocally YES. Mitchell was anywhere from 93-95 with his fastball in all his appearances, topping out at 96 in one scrimmage. Basically, Mitchell will look to be that back end, high leverage arm that comes into games to do one thing: Throw some cheese and get outs. Looks like the Frogs have found their man.

Q: What do we do with the rotation, bullpen and all these new arms?

- The rotation is certainly up in the air still and entirely depends on how the young guns develop over the next many months. Right now, you have to assume Morrison, Finnegan, Crichton, Ferrell, Seidenberger and Young are all going to figure into a starting role, with Trey Teakell also moving into the discussion. Now, let us make some assumptions: Finnegan continues to develop, Ferrell is incredibly dominant and Seidenberger is a dependable Sunday starter... Morrison and Crichton in middle/late relief is an incredibly effective duo, and something to dream on. But, more likely than not, Morrison, Crichton and Finnegan is your weekend rotation with Ferrell, Seidenberger and Teakell figuring in as a reliever and Tuesday starter.

CRYSTAL-BALLIN: LOOKING AHEAD TO FEBRUARY 2013

- Now, who knows what will really happen, just about anything is possible. But, if you are a dreamer like me, this kind of exercise is always fun to do. And, it may just be me, but that is a fairly salty lineup we have there... It won't set the school record for runs scored in a season, but it should get the job done.

And that is your fall recap! A lot of the talk between now and opening day is going to be about these freshman arms, how will they all fit in and where will we see them play... There will also be talk about this team being an early favorite for the College World Series, there already has been and there will be more to come.

Do yourself a favor, ignore all of it. ALL OF IT! Just show up on February 22nd at Lupton Stadium to see the Frogs take on the Cal State Fullerton Baseball-ers and bask in the glow of knowing that baseball is back..................