Frogs O' War looks back at Trevone Boykin's snaps to analyze the good and the bad that we've seen from our new starting quarterback this year.

Well, all that effort waiting around for my SMU game film to arrive kind of went out the window with Casey's arrest. The idea that I had been rolling with was to show that Casey had been delivering the ball exceptionally well against SMU, the receivers just weren't catching it- and that Casey was taking too many shots to last the season. Well yesterday Casey's TCU career was put on indefinite hiatus for taking too many shots of a different sort, and showing how accurate Casey was and how butterfingery our receivers were in the rain would only serve to depress me at this point.

Let's look instead at the suddenly most interesting man on the TCU campus, our new starting quarterback for this season and probably beyond- Trevone Boykin. Boykin's only extended playing time was against Grambling, so we'll be looking at some of his snaps against the Tigers, as well as his spot appearances running the ball in our other games to determine what we're likely to see on offense when the Frogs take on Iowa State tomorrow. Strap yourselves in, it's a new era at quarterback whether you like it or not.

A key thing to watch with young quarterbacks, particularly the mobile variety, is that they tend to overestimate their athletic abilities based on what they were able to do in high school. Boykin took a redshirt year, but in his first collegiate snap he showed that he is not immune to this problem.

TCU lines up in the gun with Waymon James in the backfield with Boykin, and Brandon Carter motions across the formation to give the frogs two receivers on each side. 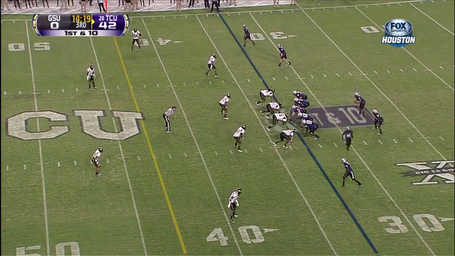 TCU is running option to the left, and so the left defensive end is left intentionally unblocked. Boykin's job is to read the DE and pitch if the end takes him. 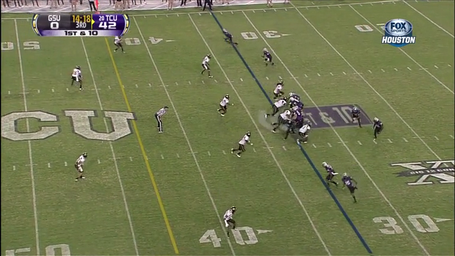 The end is now fully committed to taking down Boykin on this play, David Porter and Brandon Carter have their eyes on their men, so this should turn into a good gain for the frogs when Boykin makes the pitch. 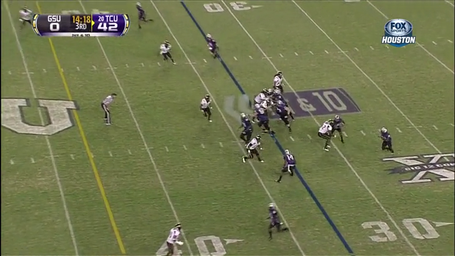 However, Boykin is seduced by belief in himself on this one and he decides to spin inside on the defensive end. Although this does work and he finds himself with some running room, just look at the running lane that James would have had if Boykin had made the pitch as he was supposed to. 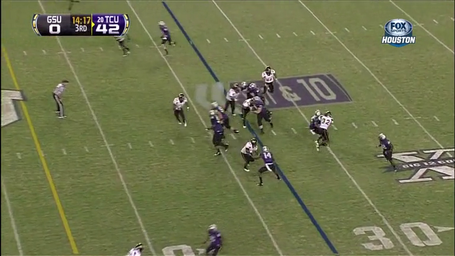 Boykin stumbles getting the end off of him and is now in traffic- he'll end up with ten yards on the play, but it could have been a touchdown or at least a much bigger and safer gain if he made the pitch to James. This will be something that Patterson has drilled Trevone on since the Grambling game, but it's a habit that can be hard for a young player to break until they're hit a few times. Right now Boykin still has the mindset of the guy who scored thirty(!) rushing touchdown his senior year of high school, so keep an eye on Boykin's pitch decisions when TCU runs the zone read and option on Saturday.

Things to watch out for (good edition) #1: Boykin is faster than Casey. By a lot.

One nice thing about Boykin though is that as opposed to Casey's awkward drunken lurchings when he decided to run the ball, Trevone Boykin is as smooth as they come running. This means big plays can happen out of nowhere, which can make a big difference in turning momentum in close games. In this instance, it's third and six and TCU lines up in an empty backfield, three receivers left and two right. 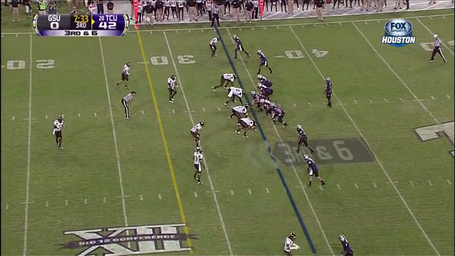 Boykin drops back into the pocket and keeps his eyes downfield, but will have to step up as he feels the pressure coming from the edge. Our back up RT Halapoulivaati Vaitai is beaten badly by the rush on the outside, which doesn't make me feel fantastic about our OL depth. Vaitai will be awesome in time, but he's not there yet. 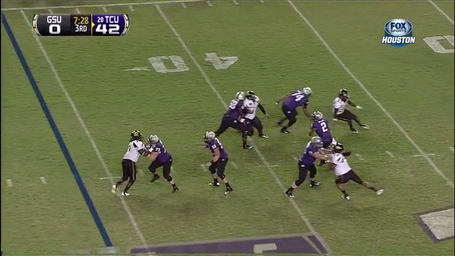 Now that he's stepping up Boykin notices how much green there is in front of him, and makes the correct decision to take off. 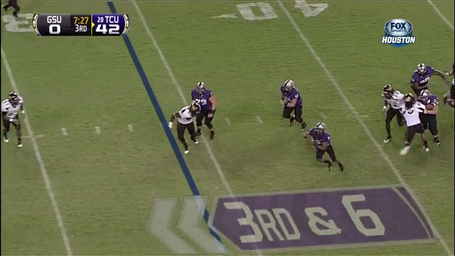 Boykin just plows straight ahead and gets the first down, which is key because he didn't try to do anything spectacular until he was sure that TCU would have a fresh set of downs to work with at the least. Casey would get the first down there too, but Boykin has the advantage of being Trevone Boykin. Where Casey lowers his head here and takes the hit from the approaching safety, Boykin keeps his head up and spies a lane to keep the carry alive. 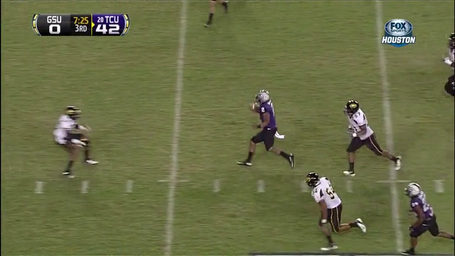 And do a simple, but devastating cut that leaves the Grambling player flailing at Boykin's arm 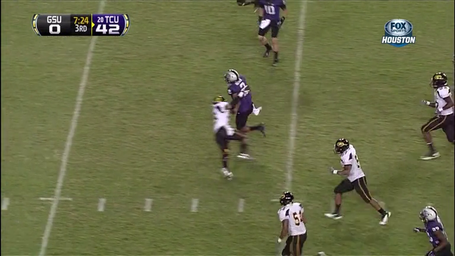 Now Boykin is faced with another decision. He has the safety closing in on him, and he could probably keep going straight ahead and let his momentum carry him forward another four or five yards at worst or break the tackle at best. However, Boykin sees the safety has a poor angle, and he slows up, leaving the safety in an awkward position- he has the wrong leg down to be able to do anything about the cut that's coming. 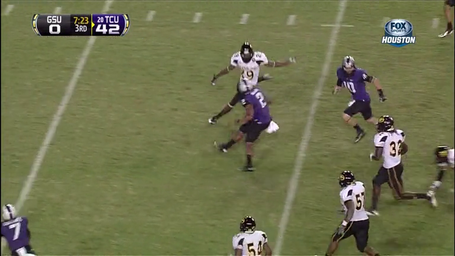 Boykin's stop forces the safety to fly by him, and our intrepid young quarterback is free to think bigger things- touchdown things. 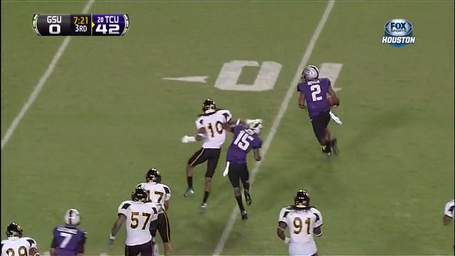 And after running all that way, Boykin is not about to be denied- he even keeps both hands on the ball as he reaches past the pylon! Casey, if you ever play football anywhere again, this is a lesson for you. 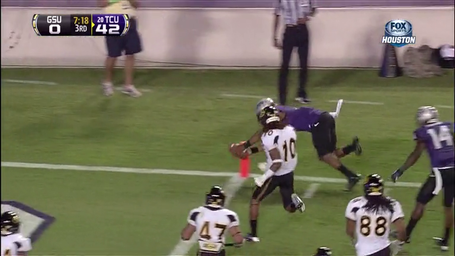 Things to watch out for (good edition) #2: Throwing Darts

We haven't seen Boykin throw a deep ball yet, as his only extended throwing action was against Grambling, and Patterson isn't the sort to aim for the big score when he's already up seven touchdowns. Still, the point of Boykin being out there was to run the offense, and that means throwing the ball occasionally. Apart from a screen for a loss of one in the SMU game Boykin hasn't thrown much in his non-Grambling outings, so let's look at one of his tosses against the Tigers. TCU lines up with an empty backfield, three receivers left and two to the right. 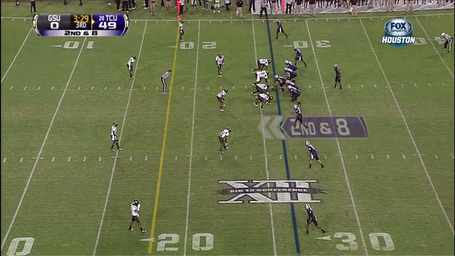 Grambling is giving the receivers sizable cushions, and TCU is running fast breaking routes to take advantage of that. Boykin sees his target break and doesn't hesitate. 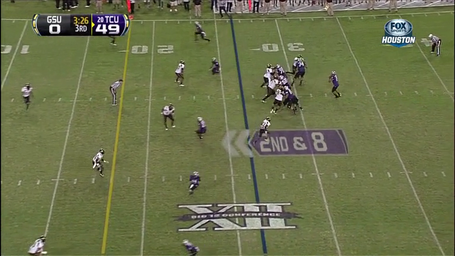 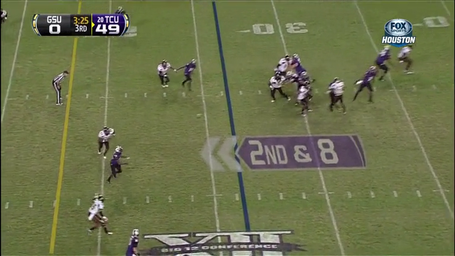 And he hits his receiver right on the money. It's not an impressive looking throw, but throwing to receivers breaking away from you is a tricky business and Boykin puts it right on the numbers for B. J. Cataon. 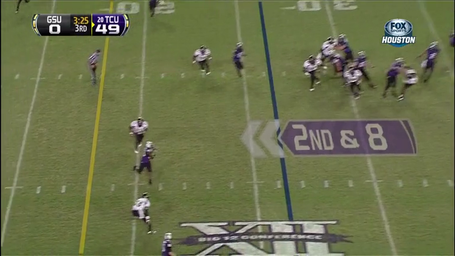 It's a good throw, but it's his most difficult one so far which really doesn't give us much information. Boykin had a deep ball in the SMU game that he slightly underthrew, but SMU committed pass interference so it's just not a load of date. What we do know is that Boykin is good at getting the ball to receivers in space, and given the exceptional quality of the TCU receiving corps he shouldn't have much trouble. Look for Iowa State to press our receivers to try and throw off the timing though, it can cause all manner of headaches for a young quarterback.

Things to watch out for (bad edition) #2: Predictability

With Casey the entire offensive playbook was open, and with TCU running one of the most varied playbooks in the nation- I formation, spread, pistol and more- it hummed like a well oiled machine when the weather was nice. The issue with Boykin's appearances in TCU's non-Grambling games is that the frog playcalling didn't give him a lot to work with. I know that in places where you want to throw the ball it's better to have your star quarterback out there, but it's just as important for the health of your wildcat package that the pass is played as a legitimate threat. Apart from the pass interference drawing deep ball against SMU Boykin was a designated keep it himself player when he came in and it showed. Here TCU lines up in an empty set, SMU is in a 3-4 with one of the OLBs spaced out to line up over the additional receiver. 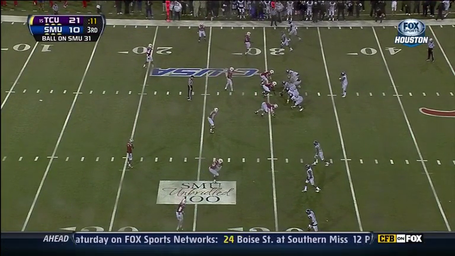 The formation they're in screams pass, but the quarterback that's in screams run, so SMU plays the run and with a single slippery step from Boykin the mustangs have time to start congregating at the dive point. 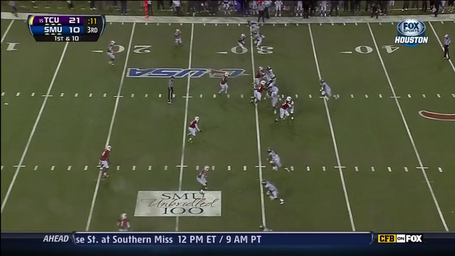 Boykin drives into the hole, but there are SMU defenders all around as our RT Avante Collins didn't get a good seal on the SMU end, meaning that he's wrapped up almost immediately 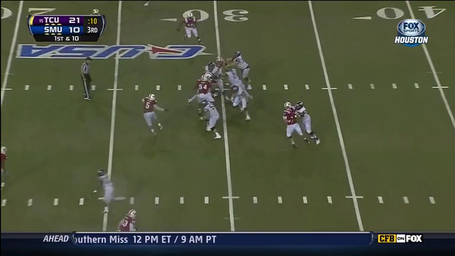 However, because he's Trevone Boykin, Boykin still gets a few yards by keeping those legs churning and spinning forward, but it's a gain of just four.

There are two issues with the play- the first is that it's a QB dive all the way, without bringing the ball back and looking like you're going to throw you don't get the linebackers taking that crucial first step backwards. When the momentum is drawing you back Boykin could feasibly turn this into a six-eight yard gain. Secondly, it's a QB Dive that SMU could see was coming- TCU has run it quite a bit when Boykin comes in (and out of the wild frog last year) so there's just not the sense that he's going to try to beat you over the top, even if he can. What this means for Iowa State isn't necessarily clear, as obviously TCU will be running a lot more than just QB dives and swing passes against the Cyclones D. However, it will be important to see just how much of the playbook we're going to put on Boykin's plate right away and what we're going to do on third down. The safe inclination is to do QB draws and options on third and medium because Boykin is great with the ball in his hands, but if we don't show that we're willing to throw it on third it will be just as predictable as running QB dives in the rain. Still, whatever happens Boykin is our quarterback for the rest of the season and hopefully beyond, so get out there and cheer your heart out tomorrow. Go Frogs.

(Here is a bonus video of Boykin's 40 yard scramble and fumble vs. Virginia)