We are back with the Monday Morning Quarterback, where we are musing about a loss for the first time in 2012. By this week last year, we had two losses. By the end of the year in 2012, we could have a lot more. In fact, we likely will have a lot more. But, forget all that right now, let's look back to Saturday and figure out where things went wrong. 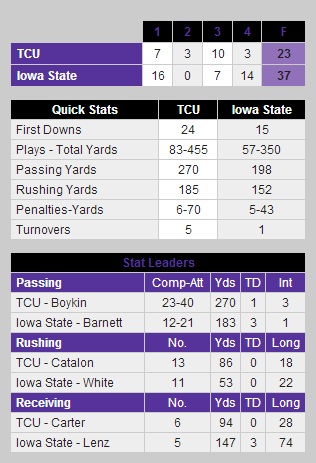 TCU didn't play as good as this line looks, but they also didn't play as bad. Boykin had four turnovers (3 INT, 1 FUMBLE) but I don't think you could expect more from one practice and zero prep. Catalon was also fairly impressive, minus the fumbles.

I swear, if we can just fix the damn turnovers, this team is OK. With those turnovers, week after week, we will continue to lose.

THE GOOD
Um, nothing?

Skye Dawson in the return game was good.

The defensive line was impressive for the entire game for the first time this year.

Oberkrombie was awesome, but we know this.

THE BAD
Everything. The team seemed totally unprepared on both sides of the ball. From just watching the game, we didn't seem prepared on the defensive side of the ball and our offense was not running. Now, I give a pass to the offense because they had no time to prepare a game plan for a totally new quarterback and they are dealing with injuries to their top running back and second wide receiver.

But, the defense. I can't believe I am saying this, but I feel most safe with the secondary right. Olabode, Hackett and Verrett are all league average and Kevin White is coming along. The first big touchdown was a major push off, I don't put that on White. The second one was on them, but I can't ask them to be perfect all the time.

The defensive line is my middle tier group, they have some good and some bad. They have improved with each game and I can't hate them, but they still need to be able to rotate more guys in, depth is a major concern there. One injury to one DE, oh my...

The lowest group for me is LB. I love Cain, I think he is good, I wish we had more of him... But, we don't. We have nothing close. Is it the scheme? Is it the positioning? Mentality? Depth? All of the above? Likely.

I just....... It is so frustrating. I don't want to admit it, but we might as well start lining up for 2014 tickets, maybe 2013 if Casey magically reappears. But, after watching Geno Smith last night, I can't help but hope we are seeing a more mobile version of that developing at TCU. But, we simply seem so far away from that right now. So, so far. I am trying to imagine people, I am trying to dream, but my brain isn't working right now.

I was actually impressed with Skye Dawson on his kick returns. Dawson is much better at returning kickoffs than punts. Dawson's 163 yards on kickoff returns was tied for fourth in a single game at TCU.

I also liked what I saw from Jaden Oberkrom. It is nice to have a little bit of confidence in your kicker. I don't want him kicking 50 yard field goals on the reg, but it's nice to know he can make them.

THE BAD
Everything...but seriously...can I say everything? I will start with the turnovers. I can't take much more of this. PLEASE hold onto the ball. How many times is TCU going to shoot themselves in the foot? You will not win many football games turning the ball over five times.

Kevin White, you cannot get beat like that. White gave up two long pass plays that I can remember. There were probably more.

I don't agree with all the penalties that were called on Saturday, but nonetheless, the Frogs have got to stop with the costly flags. There are two things that deflate defenses quicker than anything and that's penalties and third down conversions.

THE OTHER
I thought Trevone Boykin was decent. I had no idea what to expect headed into the game, but his performance didn't surprise me. He will definitely get better as he gains more experience. The two biggest issues I noticed with Boykin were his reads and his touch on passes.

I felt like Boykin missed a couple of wide open receivers because he didn't scan the full field. This is to be expected from a young QB, but TCU cannot afford to have Boykin stare down WR's. With more experience he will be able to read his progressions better.

I also thought he was off a little bit with his touch. There was numerous times where he either threw the ball too far behind or too far out in front of receivers. Once Boykin gets more reps with the wideouts, I expect this to improve also.

I'm not trying to be over critical in his first start, but those were just a couple things I thought could be improved.

Carter was six yards away from his third 100 yard receiving game of the season. Carter built a fantastic repertoire with Pachall, and it seems like he has started to do the same with Boykin. Carter is on pace for 55 receptions, 965 yards receiving and 10 touchdowns.

Meanwhile, Jaden Oberkrom hit a 50 yard field goal, along with two other field goals and two extra points. So far on the year, he's perfect on extra points at 18 for 18, and has hit on eight of 10 attempted field goals (One miss was his first collegiate attempt, so we'll give him a pass there, and the other was a 54 yard attempt into the wind and rain at SMU, so he gets another pass there as well).

Five turnovers will get you beat every single time. Three interceptions from Boykin really hurt this team, especially the one returned for a touchdown. In his defense, tackle Aviante Collins was beaten like a drum on this play, allowing David Irving to get his hands up to pick off the pass. It wasn't the only time Collins broke down on the play, as he was consistently getting pushed around during this game.

Also, what the hell is going on with Stansly Maponga? He had two 15 yard penalties against Iowa State, and he has 5 on the season. He needs to mature quickly. If he keeps making poor decisions on the field Patterson won't have any choice but to pull him.

THE OH MY GOD THIS SEASON IS DOOMED
I can't tell you how many times I cursed Casey Pachall under my breath on Saturday. His game management skills, his maturity in the pocket, and his ability to get the ball to the second or third receiver on a play have been absolutely under appreciated. However, he is an idiot.

Boykin played about as well as we could have asked him to on two days notice, and now he has a full week to prepare for Baylor, and will receive the majority of the snaps with the first team. He's going to be hard pressed to catch up as quickly as he needs though, and teams are going to force him to use his arm to beat them. He has the ability, as he showed on Saturday, but now he needs to develop some rhythm with his receivers, and he needs to get through his progressions a little quicker.

The Frogs are going to be an underdog in every game the rest of this season, and they're going to be hard pressed to win. With two wins to get to bowl eligibility, they're in jeopardy of even making a bowl at this point.