It was a perfect evening for a stadium debut, and that was the focus of this week's game as TCU brought in a clearly inferior opponent for slaughter. Grambling State never put up a fight, and TCU fans got to see lots of new shiny things: A stadium, and although we didn't yet know it, the quarterback of our future. 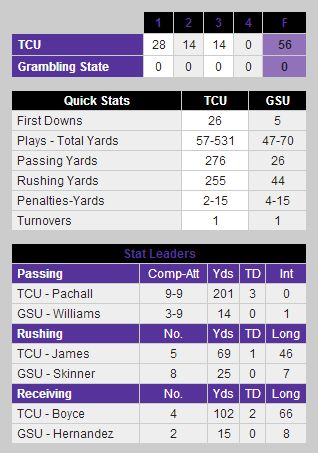 - TCU was opening up the new Amon G. Carter Stadium, which was pretty sweet. The game was boring, but only because Grambling never showed up. TCU had a totally dominant start, Casey Pachall was perfect through the air and the TCU defense literally did whatever it wanted too.

- We saw the emergence of Devonte Fields in this game, our first glimpse at what would turn out to be an incredibly dominant freshman campaign.

- We saw Trevone Boykin for the first time, during the second half, which featured some good throws but mainly a dynamic scramble for a score that really wowed TCU fans, vindicated the Boykin lovers and, although we didn't know it yet, set the table for what would be a wild second half of the season.

- This game really showed us nothing about this team, it simply allowed our freshmen to get their feet wet in a life atmosphere vs. another team, and it gave fans a chance to look around the new and beautifully redone AGC.

- Looking back and watching this game, it makes me incredibly sad to watch Pachall at quarterback and think of what might have been. Now, of course I want him to be healthy and I want him to have a good life, but you wish the kid would have figured it out before messing all this up, who knows where we would be right now.

- Enjoy the game, it is full of highlights. Next year's debut game will likely not be as flashy.