Keeping an Eye on Kansas

TCU vs. Kansas: Keys To the Game 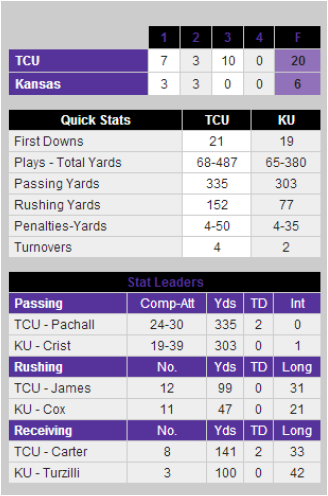 It certainly wasn't a pretty game for the Frogs, who may have had a few nerves heading into their first every Big 12 Conference game. Despite four turnovers, TCU managed to shut down Kansas and earn their first conference win of four on the season.

Looking back at this game again, it's still somewhat infuriating that the Frogs didn't win by 40. All four of their fumbles came in the redzone, and all four of those drives should have resulted in touchdowns.

Despite three fumbles on the day, Casey Pachall threw for 335 yards and two touchdowns, and Brandon Carter was the main beneficiary, with 141 yards receiving and two touchdowns. Pachall completed 24 of his 30 passes attempted against the Jayhawks, a completion percentage TCU fans longed to see again during the second half of the season.

Waymon James ran for 99 yards on 12 carries before tearing his ACL in the fourth quarter, an injury that would leave the panic meter on high for me for the remainder of that week. In fact, I still wonder what would have happened in games like the OU game or Kansas State if we could have moved the ball a little bit better on the ground.

All in all it was a sloppy game. However, it was the first Big 12 Conference game the Frogs won, and for that, it will go down in history.