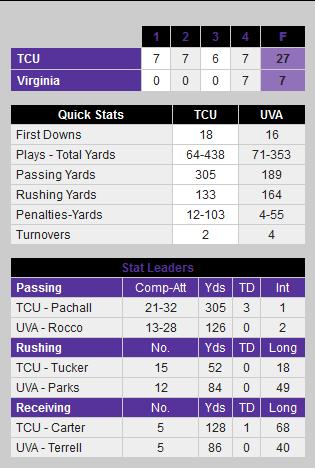 - It was the Frogs second home game and their first true test of the season. The Virginia Cavaliers came to town with a 2-1 record and were looking to upset TCU who was coming off a poor showing against Kansas.

- The game was tight at the half with the Frogs only having a 14-0 lead. TCU didn't have an offensive series that lasted longer than seven plays in the entire first half. TCU had five first half possessions, two of them ended with a punt, and another ended with an interception.

- You can call this game the Brandon Carter and Kenny Cain show because both players completely balled out. Carter had 5 receptions for 128 yards and 1 touchdown. You can add two spectacular catches to that stat line as well. Cain intercepted 2 passes and recovered a fumble.

- Casey Pachall was 21-32 for 305 yards, 3 touchdowns, and 1 interception. What we all didn't know was that this would be the last game for Casey Pachall at Amon Carter Stadium in 2012.

- The Frogs hadn't allowed a touchdown all season until Virginia scored with 4 1/2 minutes left.