After a horrible week that saw Casey Pachall arrested for DWI, TCU sent in the backup Trevone Boykin to try and make something happen vs. Iowa State. It wasn't very pretty, and TCU dropped their first game of the season. 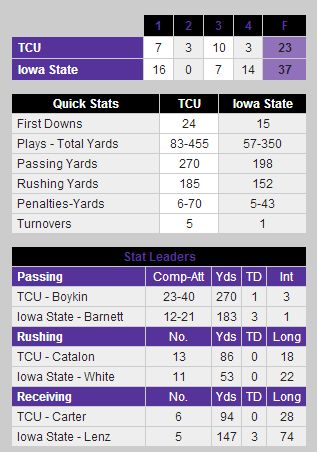 - Even the defense was off in this game, although you couldn't expect much. After such a crazy week, the chances of us doing anything remotely spectacular were probably zero.

- This was one of those games where we saw the potential of BJ Catalon, the speed and the burst looking very solid. I really like the guy, runs north and south with good instincts and natural speed, perfect. There should be a large stable of backs in 2013, but something tells me Catalon is going to work his way in quite a lot.

- Iowa State wasn't a bad team in 2012, but they weren't good either. Paul Rhodes is doing good things at Iowa State, but they still seem to have a talent deficit that will be tough to overcome. TCU was a battered and bruised team before they stepped onto the field this week, prime for a beating. But, something tells me that 2013 will be a different story, and Casey Pachall will be along for the ride.