TCU righted the ship by beating the tar out of Baylor, not only avenging the loss in 2011, but establishing the future of TCU football, led by Trevone Boykin.

Getting to Know U(niversities): Baylor

Keys to the Game: TCU @ Baylor

Inside the Numbers: TCU tops Baylor 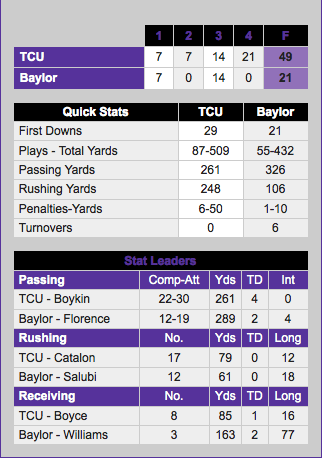 Game two of the Boykin era was much, much better than game one. Infinitely better. Of course, it had a lot to do with the porous Bears' secondary, but that's neither here nor there. It was after this game that I thought things were going to be okay.

And they were, at least for a little while.

Boykin had a near perfect game, accounting for five touchdowns, four passing and one rushing. We saw a bright flash of what the future of TCU football may have in store for fans: a true dual threat quarterback.

TCU's defense forced Nick Florence into throwing four interceptions (it should have been five, but Kenny Cain's was ruled an incomplete pass). Baylor's fans exited the stadium midway through the third quarter and never came back.

Most importantly though, it got the Frogs one win away from being bowl eligible, and it reasserted TCU atop the Frog/Bear rivalry.