It was one of the most thrilling games of the college football season, but the Frogs couldn't pull out the win.

TCU favored by 3 over Tech

Keys to the Game: TCU vs. Tech

Six Questions with Viva The Matador 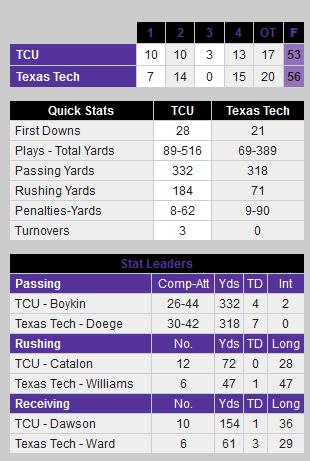 47,894 people packed the Carter which made it the second largest crowd in TCU history. The combined 109 points were the second-most in school history. The city was electric, the atmosphere was great, but the Frogs came up short 56-53 in triple overtime.

TCU had more first downs, more total yards, fewer penalties, and controlled time of possession but still couldn't pull out the victory. Trevone Boykin was 26-44 for 332 yards, 4 touchdowns, and 2 interceptions.

The stars of the game for TCU were Skye Dawson and Jaden Oberkrom. Dawson made 10 receptions for 154 yards and 1 touchdown. He also added 61 punt return yards and 34 kick return yards. Oberkrom was 6 for 6 on field goals and 5 of 5 on extra points. Oberkrom scored 23 points (6 field goals, 5 PAT), setting a TCU record for points scored by kicking in a game.

It was an amazing game and one of the best I saw all year in college football. The Frogs just couldn't come up with a play when they needed it most. The loss dropped TCU to 5-2 on the season.