The Frogs, coming off a tough loss to Oklahoma State in Stillwater, take on a tough Mountaineers team on Morgantown... It is a close fight throughout, but the Frogs pull off the upset in the end with some amazing heroics. 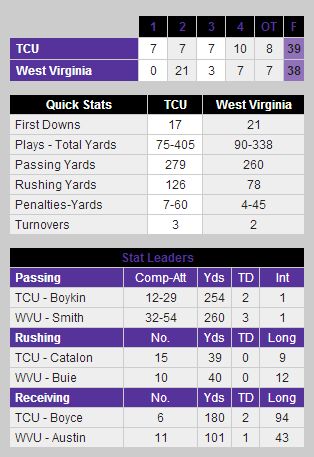 - Just finished watching this game, what a wild run... Coming off the Oklahoma State game, you would have thought this team would be down on themselves, looking for answers... But instead, they come out and put up a fairly amazing performance against what was admittedly a flawed Mountaineer team.

- But, let's not kid ourselves... If the defense had not lost Boyce on that late fourth quarter catch and run, TCU would have probably lost this game. And if Boyce had not perfectly cradled the 2-point conversion, TCU would be looking back at this and wonder, "Why?"

- This is also a game where I think I first thought that Boykin was starting to figure things out... The kid grew up a lot this year, and although I am not sold on him as the quarterback in 2013, I am certainly not afraid to run him out there.

- Do yourselves a favor, load up the game film above and start watching this... Start with the fourth quarter, it makes it way more tolerable.