The Frogs came home to Amon G. Carter on a high after beating West Virginia in overtime. Unfortunately that momentum wouldn't carry over against the Wildcats.

Getting to know U(niversities): Kansas State

Klein Will Likely Play vs. TCU

Keys to the Game: TCU vs. Kansas State

Six Shooter: Six Questions with Bring on the Cats

Inside the Numbers: TCU Falls to Optimus Klein 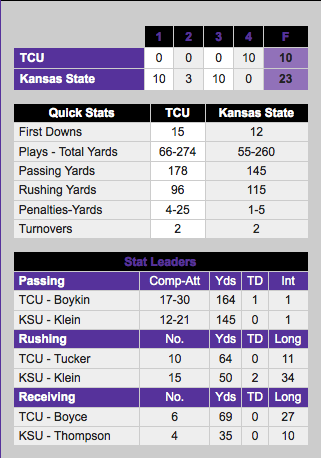 This was a defensive struggle from the get go, with both Trevone Boykin and Collin Klein struggling to get their offenses moving early. Klein threw an interception on Kansas State's opening possession, and finished the game with only 145 passing yards and 50 rushing yards.

For Klein, it was his lowest offensive output of the season, and the only time all year he totaled less than 200 yards of offense. However, two of his carries went for touchdowns, and that was plenty for his defense.

Boykin injured his shoulder in this game, which sent me reeling, thinking of what the rest of the season would be like in the Matt Brown era. Boykin would return, but he was definitely not right, and he couldn't really get the offense going against a dominant Kansas State defense.

TCU's only touchdown came late in this one, with Brandon Carter scoring in the waning minutes of the fourth quarter. The TD kept the score from looking completely one sided, but other than that it was meaningless.

There were a lot of questions about Patterson's strategy after this game, when he opted to kick a field goal instead of going for it on fourth down late in the fourth. Patterson brushed it off as just not wanting to get shut out at home.

The Frogs would stumble into their bye week before playing Texas on Thanksgiving day. The Frogs came home to Amon G. Carter on a high after beating West Virginia in overtime. Unfortunately that momentum wouldn't carry over against the Wildcats.