A Closer Look at the Longhorns

Keys to the Game: TCU vs Texas 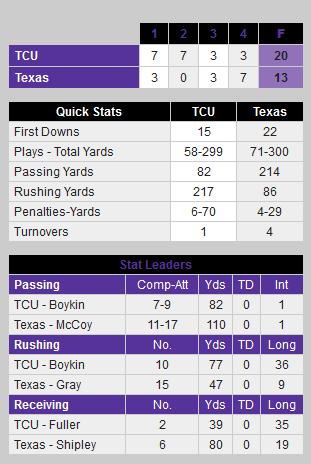 It was the Frogs first chance to play on Thanksgiving since 1928 and they took full advantage of the opportunity. It was TCU's biggest and some would say, most important win of the season.

The TCU defense was outstanding and forced Texas into four turnovers.

TCU managed to win the game with Trevone Boykin only throwing 9 passes.

The Texas offense came into the game averaging 183 yards per game on the ground. The Frogs defense held them to 86 total rushing yards.