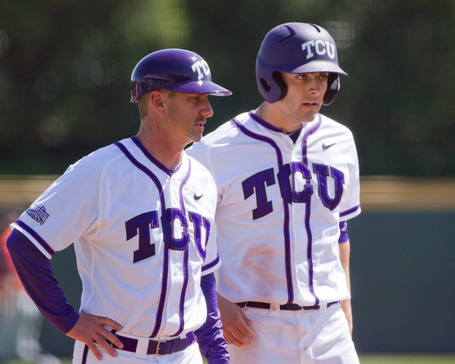 TCU Baseball will look to get on track this weekend against UNC Wilmington, a late addition to the 2012 schedule who would normally be an easy opponent, but given this teams struggles anything can happen.

The Sunday starter spot for TCU is currently undecided, Brandon Finnegan being the latest to fail at keeping the gig. The first shot had gone to Trey Teakell, who was equally unimpressive. The Frogs may elect to pitch by committee on Sunday, essentially holding tryouts for the spot. We will know more after guys throw bullpens today and tomorrow.

TCU NOTABLES
• TCU suffered its sixth defeat in the last nine games with a 4-3 loss to Dallas Baptist Tuesday night.
• Sunday’s series finale against UNLV saw the Frogs shut out for the second time this season, the first time since 2007 TCU has been shut out twice in a season.
• Jantzen Witte’s four game hitting streak was snapped on Tuesday.
• Jason Coats’ bat came to life with three hits against the Patriots.
• The Frogs have not tallied an extra base hit in the last four games.
• Stefan Crichton pitched six shutout innings on Friday night to improve to 4-0 on the season.
• The Horned Frogs have committed seven errors in the last two games, and have committed two or more errors 10 times this season.
• Preston Morrison threw a career high 5 2/3 innings Tuesday night and lowered his ERA to 1.18.

UNC WILMINGTON NOTABLES
• The Seahawks are coming off a 5-0 loss at the hands of East Carolina on Tuesday night.
• It marked the fourth time this season the Seahawks have been shut out.
• Since opening the season 3-9, UNCW has a 12-4 record, including a 10-2 mark in Colonial League action.
• Wilmington is winners of four straight weekend series.
• Tyler Molinaro has proved the power and run support this season with seven home runs and 24 RBIs.
• As a team, they have swiped 45 bases in 54 attempts, led by Andrew Cain’s nine.
• On the mound, the staff boasts a 3.57 ERA.
• The weekend starters have combined for an 8-6 record to go along with a 3.12 ERA.
• Defensively, the team is solid with a .970 fielding percentage.

SERIES NOTABLES
• Friday’s series opener with UNC Wilmington will mark just the second time the team’s have squared off on the baseball diamond.
• The Seahawks won the lone meeting between the schools back in 2007.
• TCU and Wilmington faced off on Feb. 24 as part of the Baseball at the Beach Invitational hosted by Coastal Carolina in Myrtle Beach, S.C.
• The Seahawks posted a 10-5 victory over the Horned Frogs.

A FIRST TIME
For the first time in the Jim Schlossnagle era, the Horned Frogs boast a true two-way player in Jerrick Suiter. He has appeared in 16 games as a hitter this season and made four appearances with two starts on the mound.
At the plate, he is one of the team’s leading hitters with a .300 average. Of his 15 hits, two have been triples and he has notched eight RBIs. 13 of his 14 starts have come as the designated hitter, while his other start came in center field.
On the mound, the freshman has amassed a 4.50 ERA in eight innings pitched. He has allowed four run on eight hits with three walks and seven strikeouts. Opponents are hitting .267 against the right-hander. Tuesday night marked his second start of the season.

MATURE BEYOND HIS YEARS
A freshman from North Carolina has been a bright spot in the bullpen this season for the Frogs. Preston Morrison has shown tremendous promise early in his career with a 1.18 ERA in his first 10 collegiate appearances. He showed his dominance Tuesday night as he tossed a career-high 5 2/3 innings with four Ks and allowed just one unearned run. Opponents have been baffled by the righty this season as he has fanned 25 in 38 innings pitched and has issued just three walks. They have managed to hit just .201 against him this season.

AS THE DEFENSE GOES...
On the season, the Horned Frogs have committed 42 errors for a .959 fielding percentage. 28 of those 42 errors have come in seven games, while 37 have come in eight total games. The Horned Frogs have played 11 errorless games this season and boast a 9-2 record in those contests. They are just 5-10 in games they commit an error, including 2-8 in games in which they commit two-or-more errors.