Share All sharing options for: Don't Be Surprised That Aaron Green Chose TCU 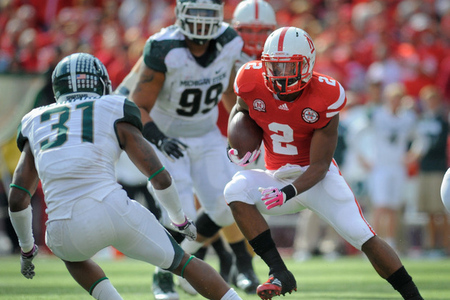 Over the weekend highly recruited running back Aaron Green announced he would be transferring from Nebraska to TCU. It’s a big time pickup for the Frogs, and I know TCU fans are excited, but should you really be that surprised that Green chose TCU?

ESPNDallas.com had a posting today titled "TCU's big pickup a sign of what's to come?" In the article it poses a couple of questions…

TCU has three 700-yard rushers returning in 2012 for its inaugural season in the Big 12, but do the Horned Frogs land Green if they're still stuck in the Mountain West?

Do they even sniff Green?

He's just a transfer, and will sit out a year, but he was the No. 11 player in the nation in 2011. How many of those has TCU ever landed?

More importantly, how many more will they get?

Now just for fun, I would ask the question back, how many top 25 ranked players has TCU needed? I am pretty sure they have done just fine with the way they go about their recruiting.

I know they aren’t quite as highly ranked as Green, but are people forgetting about Brandon Carter? What about LaDarius Brown? And Deryck Gildon? All of those players were recruited heavily and they all chose the Frogs. To add on, TCU was still in the Mountain West Conference when all of those players decided to CHOOSE TCU.

How many more will TCU get? That depends a lot on the results on the field, but if the past is any kind of indicator of things to come, I predict there will be plenty more. The Dallas/Ft. Worth area knows about the Frogs success. The state of Texas is starting to take note and the rest of the country isn’t far behind. Be excited, be pumped up, but don’t be surprised that top athletes are choosing TCU. I’m not.