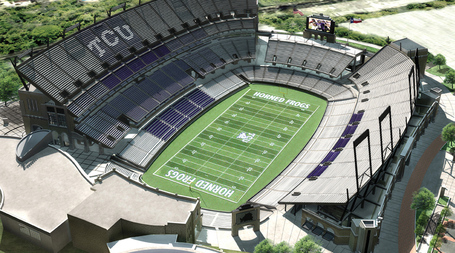 What a historic day for TCU Athletics... This morning, TCU sold out the entire allotment of General Admission seats for its 2012 Football Season, its first in the Big 12 Conference.

Standing Room Only tickets remain, plans for the sale of these items have not been announced.

It is likely some opponents may return tickets to TCU Athletics from their allotment, plans for these tickets have also yet to be announced.

TCU Athletic Director Chris Del Conte had previously stated that TCU would only consider further expansion of Amon G. Carter Stadium to 50,000 seats (through the addition of a second deck on the east side of the stadium) if its season ticket base reached 30,000 tickets. With that number now surpassed and a waiting list likely forming, the administration will have yet another decision to make.