TCU's official entry to the Big 12 is only a month away now, and though the Big 12 has always seemed like the promised land to TCU fans the Mountain West years have been good to the Frogs. So every day until the Big 12 becomes official Frogs O' War will be counting down its staff's top ten TCU sports moments in our Mountain West tenure. Number ten was beating Oklahoma in 2005. Number nine is the loss to Boise State in 2009's season Fiesta Bowl. 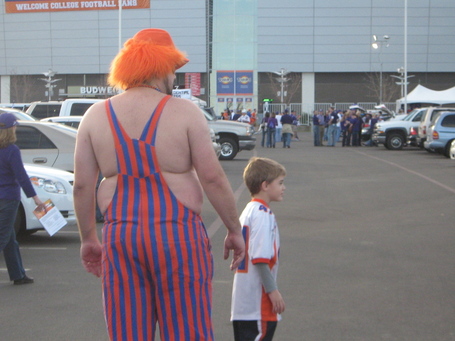 Or, as we say it in Wimplehaus, the F-Bowl. Sour grapes? I won't deny; folks called it worse than that at the time, most memorably the "Separate But Equal Bowl." But these three facts exist-- (1) the achievement of making the bowl, and not as a "because-we're-forced-to" last pick, was a stupendous validation of Gary Patterson's program; (2) the game itself was a tremendous validation of Boise State's superior coaching; and (3) the outcome was a monstrous dud for TCU.

It's a testament to the first of those three facts that the '09 F-Bowl makes this list.

The game was the reward for so many near-misses in recent TCU history, as well. The Frogs came this close to busting the BCS before any others in 2000 when LT was leading the program, only to see that glory slip away in the rain one night in San Jose; and again in 2003 when Southern Miss put the kabosh on the Frogs' 10-game winning streak. Frog fans watched with no small envy when Utah broke the glass ceiling in '04. TCU would have busted the BCS in 2005, under the current rules, when Jeff Ballard saved the season in Provo. Boise followed Utah to the Fiesta Bowl in '06, in the classic game of the modern era; Hawaii followed in '07 in perhaps the most forgettable game of the modern era.

TCU looked like it was headed for the Sugar Bowl in '08, in Salt Lake City, as Aaron Brown and the Frogs ran all over the Utes for the first quarter of the game in November that year; but by halftime the scoring had slowed to a crawl, and the energy slowly red-shifted to the Utes in the second half, and two missed field-goals later, TCU again was on the outside of the BCS, by inches.

So it was a big deal for TCU to be looking at 12-0 and an autobid to one of the big games in '09. The week of that season's finale, your humble Wimple wrote the following, about all of the program's near-misses:

But fate never seemed to bless the Frogs' attempts to assemble all of the ingredients. But a TCU victory Saturday will render that sentence incomplete without the following caveat: until 2009. What the Frogs may accomplish in five days is no less than a reversal of almost 50 years' curse. TCU may rise above irrelevance on Saturday; above its nomad journey through the outcasts of Division 1-A; above a couple generations' acceptance as a has-been, a history lesson, a glint only in grandfathers' eyes. TCU again vies with Texas for supremacy in the Lone Star State, and in the nation.

That is the context of the F-Bowl; achieving the bowl bid was the catharsis that the program had sought since the walking death penalty in the mid-1980s.

All of which only heightened the thud that was the loss.

Not just a loss, mind you, but a blundering, inexplicable, ugly, razor-thin, loss that seemed for all the world to be prompted by uncharacteristic play-call and poor on-field performance. In short, the F-Bowl was jarringly unlike the 12 games that prompted it.

Yes, credit must be due Boise, which showed up sporting a 4-1-6 defense which scared TCU's young offensive coordinators away from their gameplan. But that doesn't explain the matter fully.

The rapture that accompanied anticipation of the BCS match-- TCU's chance to do what Utah did the year before, and humble a BCS program, and strike another blow to the Cartel-- fizzled almost audibly when the Fiesta Bowl picked Boise as the bride. TCU's coaches faced a steep uphill motivating their players to match Boise's intensity; clearly they did not succeed. Further, and Coach P said he'd do it differently next time, the coaches did not have the team go to a different hotel on the eve of the game, to cut down on the partying. Casey Pachall hampered his growth into a team leader this trip with immature conduct.

And then came the game. Truth be told, it was a terrific defensive game, but utterly discombobulating for Frog fans, because the playcalling was so... Mike Schultz. TCU had (finally!) jettisoned the timid offensive coordinator following the Utah loss in 2008; to see his style of play-calling return, and on a stage bigger than any he'd coached, was so disappointing. TCU put the game on Andy Dalton's shoulders, and he couldn't find his receivers amid Boise's crowded secondary.

More maddening, TCU hardly tried to give him run support. Here is Matthew Tucker's single touch of the game, in which he gained nine yards, and was never given the ball again. 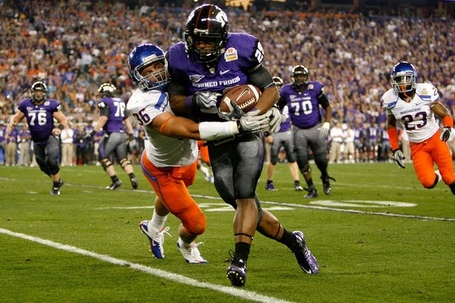 And for all that, TCU almost won. The Frogs' defense stifled Boise offense almost as much as Boise's D stifled the Frogs' offense. Boise converted a lot more third downs, but couldn't turn them into points. The difference was symbolized in Kyle Brotzman's fake punt; it was, perhaps, the rare obvious example of Coach Patterson getting out-coached.

Somewhere in southern Arizona or New Mexico, while driving home from the game, the Wimples were stopped by the border patrol, which had set up a road block. The agent, seeing the plethora of purple in our car and clothes, gave us a wry grin and asked, "That was some fake punt, huh?"

Yeah, it was. For almost two years it was the fake punt, until Boise repented in spades, on the Blue Turf, no less.