TCU's official entry to the Big 12 is only a month away now, and though the Big 12 has always seemed like the promised land to TCU fans the Mountain West years have been good to the Frogs. So every day until the Big 12 becomes official Frogs O' War will be counting down its staff's top ten TCU sports moments in our Mountain West tenure. Today is #7: Three-peat football championships, 2009-2011.

TCU burst into the Mountain West in 2005 with an undefeated season, and then spent a few years in the mid-tier of the conference. But with the maturity of Jerry Hughes, Robert Henson, Jason Phillips, Daryl Washington, Tejay Johnson, Cody Moore, Kelly Griffin, and James Vess on defense, and Andy Dalton, Jeremy Kerley, Bart Johnson, Jake Kirkpatrick, Marshall Newhouse, and Marcus Cannon on offense, the tables turned.

It's been mentioned elsewhere, and is always worth another visit. No team in recent years has dominated its conference-- nay, terrorized it-- like TCU did the Mountain West since about 2008. The net yards and points per conference game, on average, are illuminating; horrifying, even. From 2008 to 2011, TCU gained an average 235 more yards and 29 more points than its conference opponents. The best totals in that span, in 2010, are 313 more yards and 33.4 more points each game than its opponents.

That's simply ridiculous domination; nobody (in any conference) comes close to those 2010 numbers. Heck-- most teams' best numbers don't match TCU's average over those 4 years-- not to mention approach TCU's 2010 figures. That 4-year average is, in my humble opinion, the under-trumpeted stat of the decade. 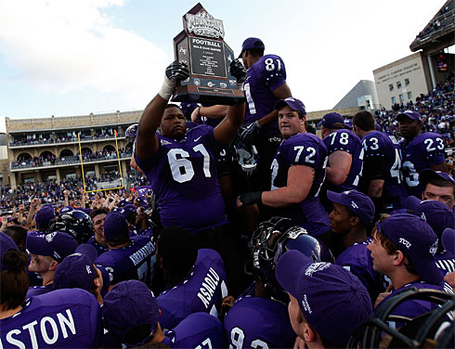 Not surprisingly, the Horned Frogs collected conference trophies like Halloween candy in that span, with three in the bag, and a fourth only missed by a few feet wide of the goalpost in Salt Lake City, back when Utah was good.

It's almost hard to remember, but BYU strode across the conference for a couple of years (until the memorable bust in '08, in Fort Worth), and once or twice Utah did the same. But none of them clobbered all of their conference-mates so badly, and so many times in a row, than TCU did. One wonders if the MWC's logo is purple because of the bruising the purple-clad interlopers from Fort Worth put on the conference since Andy Dalton's sophomore year.

Of the three conference championships-- all of them outright-- the only one that came as a surprise was the 2011 championship. The Frogs, minus the large contingent of Rose Bowl seniors, were still widely expected to contend for the trophy, but when the Mountain West moved the TCU-Boise game to the blue turf, the prognostications moved with it, to favor Boise. I am aware of only a single fan who went on record predicting TCU to win, and it wasn't me!

And so it was, when Casey, Josh, Brandon, and the boys upset Darth Kellen and his smurfs, that the Frogs collected the brass again, this time for the last time.

I hope the Mountain West didn't let the door slam it in the butt on our way out.