TCU's official entry to the Big 12 is only a month away now, and though the Big 12 has always seemed like the promised land to TCU fans the Mountain West years have been good to the Frogs. So every day until the Big 12 becomes official Frogs O' War will be counting down its staff's top ten TCU sports moments in our Mountain West tenure. Today is #4: The New Amon G. Carter Stadium.

It is easy for Frog fans to forget how far away this goal used to seem. When TCU joined the MWC in 2005, this is what Amon G. Carter Stadium looked like. 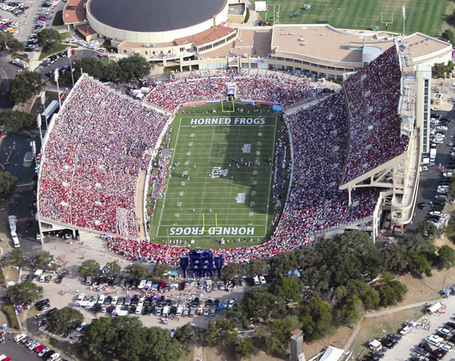 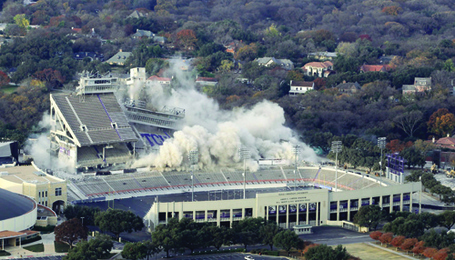 As TCU exits the MWC and enters their first season of play in the Big 12, Amon G. Carter stadium will look like this:

Pretty nice, eh? Since 2005, the Frogs have spent an enormous amount of money on improvements to ACG and their vision of creating the "Camden Yards of College Football" has played out beautifully. Sure, the new stadium may only seat 40k instead of 45k. Who cares? The point is, this stadium is not infested with asbestos, looks great and will be a strong vessel to carry TCU into their next chapter of play.

Just for a minute, lets look at the numbers:

Just let that sink in... What an enormous investment by TCU. And then, add this fact in: Not one dollar of that cost was spent directly by the school, every single dollar was donated.

That is truly remarkable.

One thing that I hate is when I read TCU fans complaining about some aspect of this new stadium: Why is it smaller? Why couldn't I get tickets? Why are there so many box seats? Why have so many luxury boxes?

Hey, entitled TCU Fan: Why don't you shut the f*** up and enjoy what you have. You have a top ten program in the country, a top ten coach, and now you have a top ten stadium (in terms of beauty, IMHO) to boast about. What more do you want? I digress...

Ultimately, when you think back to the MWC era in TCU Football, I doubt you will think of the new AGC Stadium. Why would you, not one game was played in the totally finished version of the complex. The new Camden Yards of College Football will likely become the symbol of TCU's virility as it enters into the Big 12, phallic spires and all.

But, allow me a thought. The MWC helped build that stadium. The success we had against the UNLVs, as well as the Boises and the Utahs, helped build this stadium. Truly, the new AGC Stadium should serve as a monument to our time in the MWC, the years where TCU went from afterthought to national power. A trophy to our accomplishments, and ultimately a bookend to this chapter of TCU Football history. The next chapter, though, starts with a pretty cool plot. Here's to you, Carter.