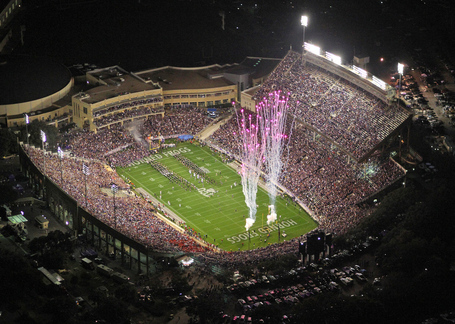 TCU's official entry to the Big 12 is only a month away now, and though the Big 12 has always seemed like the promised land to TCU fans, the Mountain West years have been good to the Frogs. So every day until the Big 12 becomes official Frogs O' War will be counting down its staff's top ten TCU sports moments in our Mountain West tenure. Number ten was beating Oklahoma in 2005, number nine was the 2010 Fiesta Bowl, number eight was TCU's winning every Mountain West Championship in baseball, number seven was TCU's three consecutive Mountain West Championships in football, number six was the 2011 TCU/Boise State football game, number five was the 2010 football game against Utah, number four was the new Amon G. Carter, and number three is the wonderful evening of November 14th, 2009 when the Frogs took down Utah 55-28.

After dropping three straight games to Utah, two of the three being by a combined ten points, you could say the Frogs were looking to get the monkey off their back when the Utes came to Ft. Worth for a Mountain West Conference showdown. TCU would finish out its 2009 season with games against Wyoming and New Mexico so the only thing standing in the way of an undefeated regular season and busting into the BCS for the first time was Utah, and the Frogs would not be denied.

The day started with ESPN’s College Gameday on campus for their first ever visit to Ft. Worth. Fans and students camped out the night before to ensure they had prime spots and their signs would be seen. It was the most electric the city of Ft. Worth had been for a TCU game in a long time. By the time kickoff came around at 6:30 PM, 50,307 Frog fans had packed Amon G. Carter Stadium like it had never seen before.

TCU got the ball to start the game and that is when the butt kicking began and never let up. The Frogs first drive was for eight plays and was capped off by a Matthew Tucker 41 yard touchdown run. On the ensuing kickoff, Tyler Luttrell laid a HUGE hit to cause a fumble recovered by TCU. The Frogs couldn’t capitalize though as Ross Evans missed a 26 yard field goal. After a couple of drives that stalled by both teams, TCU took a 14-7 lead into the second quarter.

It didn’t take long for the Frogs to get on the board in the second quarter of play as Jeremy Kerley closed out a four play drive with a 3 yard rushing TD to put the Frogs up 21-7. After a Utah three and out and a 39 yard punt return by Kerley, the Frogs were back in scoring position once again. In only :55 TCU put more points on the board when Antoine Hicks rushed for a 1 yard touchdown. That wasn’t it though. On the next Utah drive Jordan Wynn’s pass was intercepted by Tank Carder and returned to the house to put TCU on top 28-7. The Frogs put three touchdowns on the board in the span of about 2 ½ minutes and the game was over at that point.

The Frogs added two more rushing touchdowns in the fourth to seal the 55-28 victory and finally removed the Utah monkey from their back. TCU racked up 549 yard of total offense with 342 coming on the ground. After the game Coach Patterson proclaimed, "If the nation didn't think that this was enough style points, then I don't know what is."

The 2009 game against Utah is by far my most memorable at Amon Carter stadium. That could change in the upcoming season, but for now that game remains at the top. I am not going to lie, after coming up short every other time TCU had a shot at the BCS, I wasn’t sure if they would ever be able to get over that final hump. Coach Patterson and the team obviously put my doubts to rest after this game.