Share All sharing options for: The Top Ten Moments In TCU's MWC History #1: The Rose Bowl 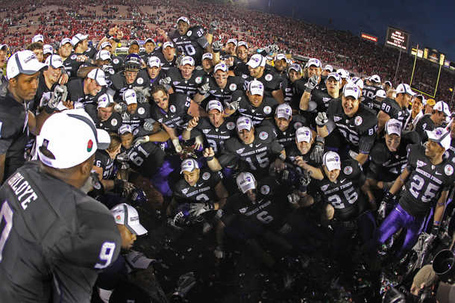 TCU's official entry to the Big 12 is only a month away now, and though the Big 12 has always seemed like the promised land to TCU fans, the Mountain West years have been good to the Frogs. So every day until the Big 12 becomes official Frogs O' War will be counting down its staff's top ten TCU sports moments in our Mountain West tenure. We are finally to our number one moment...Drum roll please...I know you aren't surprised, but number one on our list is the Rose Bowl.

What do I need to say about this game that hasn’t already been said?

To do this game justice, you have to go back to Friday night, November 26th, 2010. That is the night Boise State missed two field goals against Nevada to put the Horned Frogs into the Rose Bowl. TCU fans had been worried all season long that the Frogs would be left out of the BCS picture because of Boise State being ranked higher. Those worries were put to rest late that evening and I know I wasn’t the only Frog fan going nuts when Nevada finally closed out that game.

On January 1st, 2011 the "Granddaddy of Them All" lived up to its name as TCU and Wisconsin squared off in a heavyweight battle. The stadium was packed, the weather was gorgeous, and the Frogs were not to be denied. TCU was the first school from a non-automatic qualifying conference to play in the Rose Bowl since the advent of the BCS, but the bright lights of Pasadena would not shake this group.

All week the media had been talking about how the huge Badgers offensive line was going to dominate a smaller TCU defense. When Wisconsin received the ball to start the game I became instantly worried when Monte Ball broke off a 40 yard run on the first play from scrimmage. The Frogs would hold though and Wisconsin settled for a field goal to go up 3-0.

TCU received the kickoff for their first possession and immediately went to work. Andy Dalton and the offense moved the ball down the field with confidence and capped off the 10 play, 77 yard drive with a beautifully designed touchdown pass to Bart Johnson. Wisconsin would come right back with a touchdown of their own. The Badgers went on a 6 play, 67 yard drive that ended with a John Clay rushing TD to put Wisconsin up 10-7. TCU would answer with another touchdown when Andy Dalton ran one in from 4 yards out to put the Frogs up 14-10 at the end of the first quarter.

The scoring slowed down in the second. Wisconsin missed a 39 yard field goal, but the Badgers did convert a 37 yarder right before half time to draw within one point at 14-13.

The TCU offense got the ball to start the second half and instantly went right back to work. After a couple of nice receptions from Jeremy Kerley and Ed Wesley, the Frogs were right back in scoring position. Luke Shivers punched one in from 1 yard out to give TCU the 21-13 lead. After two punts from Wisconsin, the Frogs took the eight point lead into the fourth quarter.

After a couple of punts by the Frogs, Wisconsin got the ball with 7:32 remaining in the game and put together a nice drive of their own. The Badgers gave the Frogs a heavy dose of John Clay and Montee ball as they moved down the field and closed out their 10 play drive with a 4 yard Montee Ball rushing touchdown. Wisconsin was now within two points at 21-19 and was forced to go for the two point conversion. That is when one of the most memorable moments in Frog football history happened.

I think most people in the stadium that day assumed Wisconsin would try and run the ball in for the two points. They didn’t. Scott Tolzein dropped back for a pass and that is when Tank Carder sealed his place in history as he timed his jump perfectly and deflected Tolzein’s pass straight to the ground. Bart Johnson recovered the Wisconsin onside kick attempt and TCU ran out the clock to become ROSE BOWL CHAMPIONS!!!

I’m not married, and I don’t have any kids, so for me, TCU’s Rose Bowl win is probably the greatest moment of my life to this point. To see my favorite team do something I never thought could happen was absolutely incredible. I will never forget being in the stands when that clock finally hit zero and the confetti started raining down.

My friend and I had taken the train out to the stadium that day. On the way there our section of the train was filled with loud and obnoxious Wisconsin fans. They kept telling us how bad TCU was going to lose and all the other nonsense you normally hear from opposing fans. I just smiled and said nothing back because I knew what was about to happen. On that same train ride home, there was nothing but silence. I did nothing but smile and hold up my Rose Bowl Champions shirt. What a great day.